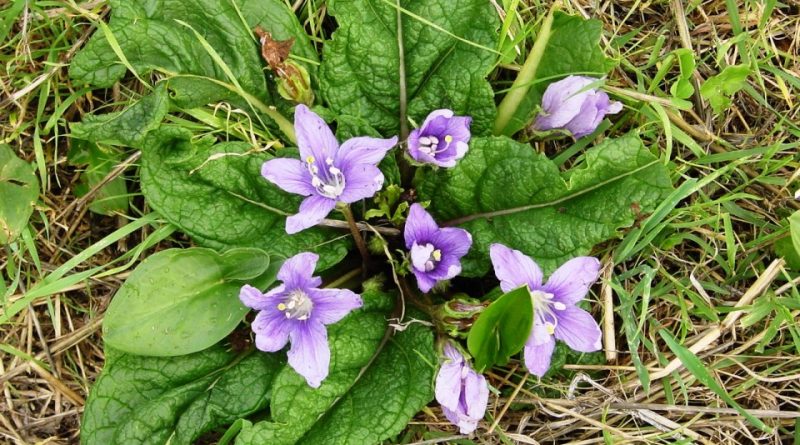 The autumn mandrake (Mandragora autumnalis Bertol., 1820) is a herbaceous species belonging to the Solanaceae family.

Systematics –
From the systematic point of view it belongs to the Eukaryota Domain, United Plantae, Magnoliophyta Division, Magnoliopsida Class, Solanales Order, Solanaceae Family and therefore to the Genus Mandragora and to the M. autumnalis Species.

Etymology –
The term Mandragora seems to come by assonance from the Persian mandrun-ghia grass-man: for the shape of the roots.
The specific epithet autumnalis comes from autumnus autumn: autumn, autumn.

Geographical Distribution and Habitat –
The autumn mandrake is a plant widespread in the southern Mediterranean area that goes from Portugal to Greece, present from Sardinia to North Africa and to the Middle East. In Italy it grows in uncultivated fields along hilly areas and arid mountain paths exposed to the sun.
Its habitat is represented by the soils of calcareous and sunny soils. 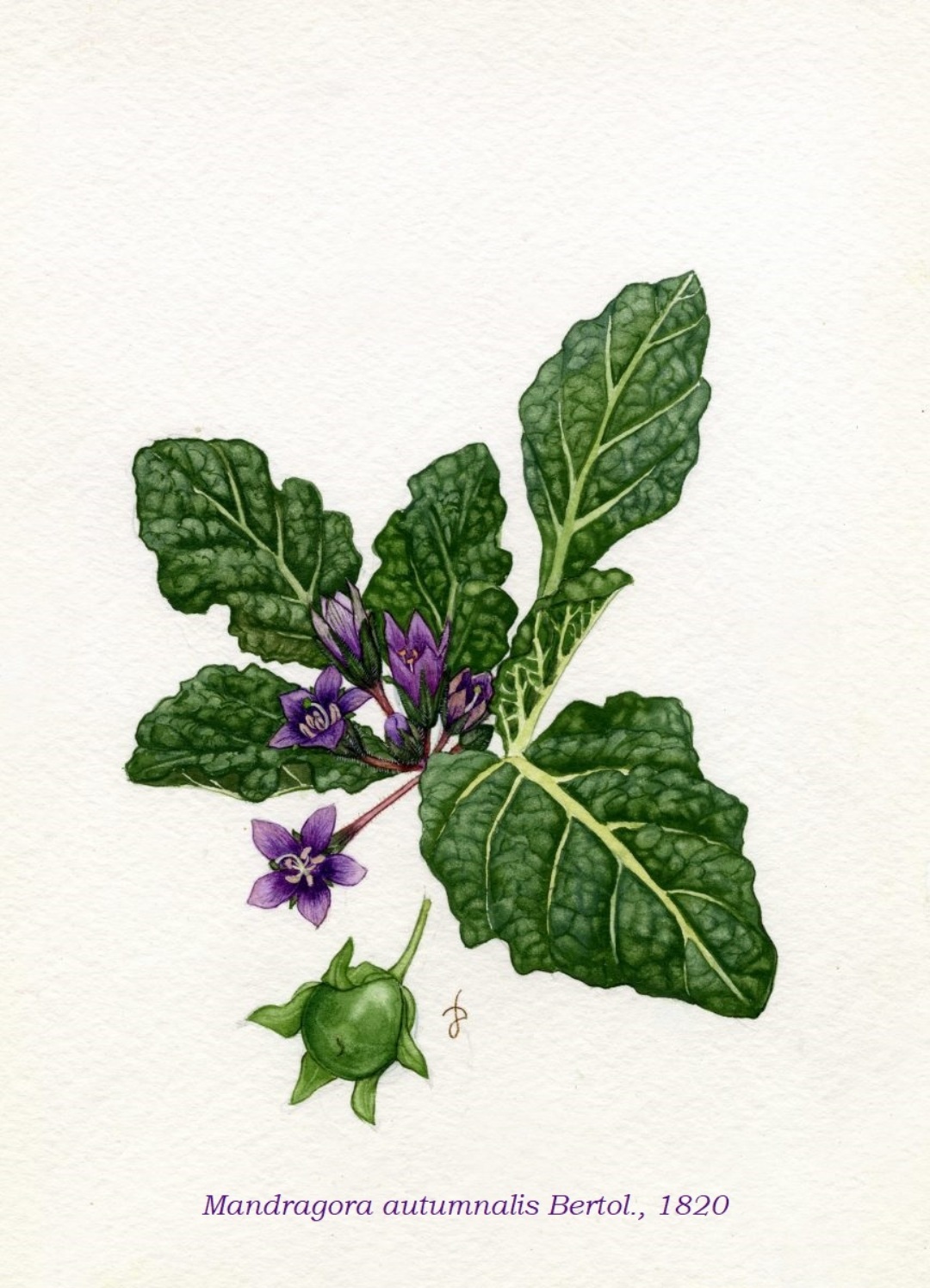 Description –
The Mandragora autumnalis is a perennial herbaceous species, emicriptofita, acaule which is endowed with a large taproot root, of the characteristic anthropomorphic aspect.
The leaves are ovate-oblong, corrugated, arranged to form a basal rosette at the center of which, in autumn, a tuft of pedunculated flowers is formed in groups of 5 to 60.
The blue or white flowers are bellflowers just over 2 cm long, with gamopetal corolla which in the terminal part is subdivided into 5 triangular lobes with slightly wavy margins.
The fruits are round-shaped berries equal to those of Solanum capsicastrum, which turn from greens when they are immature to yellow-reddish when ripe until they become blackish when they dry. The berries ripen in the summer and like all other parts of the mandrake they give off an almost fetid unpleasant smell. The fruit is also called the devil’s apple due to its high toxicity.
Inside the berries we find the seeds that are numerous, small, reniform and able to germinate in very long times.

Cultivation –
The autumn mandrake is a plant which, with appropriate precautions, lends itself easily to being cultivated in the ground and in pots. Pot cultivation is not recommended as the excessive development of the root about 150 cm, would require large and very deep vessels.
Even if the mandrake is a poisonous plant for ingestion, it is however cultivated in full ground as a perennial ornamental plant and as a good omen.
For its cultivation it requires bright and sunny places even if it develops in a luxuriant way even in those partially shaded. It does not suffer from the heat and does not fear the cold but badly tolerates night frosts.
This plant prefers well-drained calcareous soils. The suitable growing substrate must be deep, fertile and well drained to allow the correct development of the root which, as is known, is about 150 cm long. It does not tolerate damp or gravelly soil.
As far as irrigation is concerned, even if it is a rustic plant that is satisfied with rainwater, it should be regularly watered during the summer and especially during periods of prolonged drought. A reduced or low water intake hinders the vegetative growth of the plant.
For the contribution of fertilizing substances, even if the mandrake does not have particular nutritional requirements, at the time of planting, a supply of mature manure favors growth and flowering.
For multiplication we remind that this plant, in nature, spontaneously reproduces by seed.
Sowing is however carried out in the autumn period by layering the seeds in a pot containing a specific fine and light substrate, which must be kept moist until the buds appear. Germination times are quite long (months) but on the other hand the young seedlings can be planted definitively without any problem as they are very resistant to transplanting.
Furthermore, to avoid spreading fungal diseases, it is advisable to cut dry leaves and those ruined by snails.
Finally, the possible diseases and parasites. Generally, mandrake is a rustic plant resistant to common animal pests such as aphids and mealybugs but suffers from root rot due to water stagnation in the soil. Among the terrestrial animals, it is appealing to snails that quickly erode the rosette of leaves until leaving the short caul.

Uses and Traditions –
Mandragora autumnalis is a plant that has a unique vegetative behavior. In summer the plant disappears from the ground going into hibernation and becoming hypogeal, but under the layer of the earth it is perfectly alive. It comes back in the autumn giving a show of itself in the cold season.
It is a plant known since ancient times, so much so that it was also mentioned in the Bible in the book of Genesis: Rachel asked Lia for the mandrake root to obtain fertility.
Because of its particular shape, this plant is called by different names: the Devil’s apple, the old bearded man, the old lady and the semi-homo.
The ancient Greeks called the root of Mandragola anthropomorphon for its anthropomorphic appearance which takes on bifurcating and branching and were even able to distinguish its sex: male mandrake with white, thick and fleshy root and female mandrake with smaller and blackish root.
In ancient times the root of the Mandragora, which was considered magical due to its characteristic anthropomorphic shape, was kept wrapped in a red cloth in a hidden place and then used for various purposes such as: protecting the owner’s health, winning and throwing the evil eye, having or take away fortune and wealth, favor fertility, stimulate love, overcome calamities and death.
According to ancient legends, those who carelessly rooted out the plant from their land fell out of favor and were cursed for life. In many cases the poison that escaped eradication led to madness and death.
Also in the past, mandrake was used as a hallucinogenic and aphrodisiac plant. It was also used by witches as the main ingredient in various magic potions and for wodoo rituals.
It was probably the anthropomorphic conformation of its roots that helped to give the mandrake supernatural powers in many popular traditions.
In any case, the mandrake is a toxic plant that contains some alkaloids whose action is similar to that of atropine and, therefore, should not be grown in places frequented by small children who, for simple curiosity, could be encouraged to swallow the colored berries. Ingestion could increase heart rate, produce psychomotor and psychic arousal effects, hallucinations, manifestations of convulsive laughter and delusional states.
Despite being poisonous, mandrake is still used in traditional medicine as a mild anesthetic. Homeopathic medicine, with drugs extracted from the root and dosed appropriately, treats respiratory diseases, epilepsy, depression, insomnia and urinary incontinence.

Preparation Mode –
According to ancient documents and prescriptions those who have to seize this grass are careful not to have the opposite wind and trace first, all around, 3 circles with the sword, then unearth it looking towards the west. The juice is obtained both from the fruits and from the stem, after the top has been cut, and from the root, opened by making small holes or cooking. The latter can also be used in its woody part; it is also preserved in wine cut into floppy disks. The juice is not found everywhere; however, wherever possible, it is harvested during the harvest period. Its smell is strong, but the odor emanating from the root and the fruit of the white type is stronger. The ripe fruits are dried in the shade. The juice that comes out is condensed in the sun, as well as that of the root crushed or cooked in black wine until it is reduced to a third. The leaves are preserved in brine and this increases their effectiveness; otherwise, the juice of fresh plants is like a poison; and even with this preservation system harmful substances produce heaviness in the head even only through the sense of smell. Although in some areas the fruits of this plant are eaten, those who are not informed lose their word because of the too strong smell; they even come to die if they take a larger amount in the potion. The soporific power of this herb is related to the physical sturdiness of those who drink it: the average quantity of a potion is one ciato. It is also drunk against snakes and before sizes and holes, as an anesthetic: for this use it is enough for some to smell it to fall asleep. It is also drunk as a substitute for hellebore, in honeydew wine, in doses of 2 mules (but it is more effective than hellebore), to procure vomiting and to expel black bile “.
It is evident that today the use of this plant must be followed by careful prescriptions and medical evaluations.