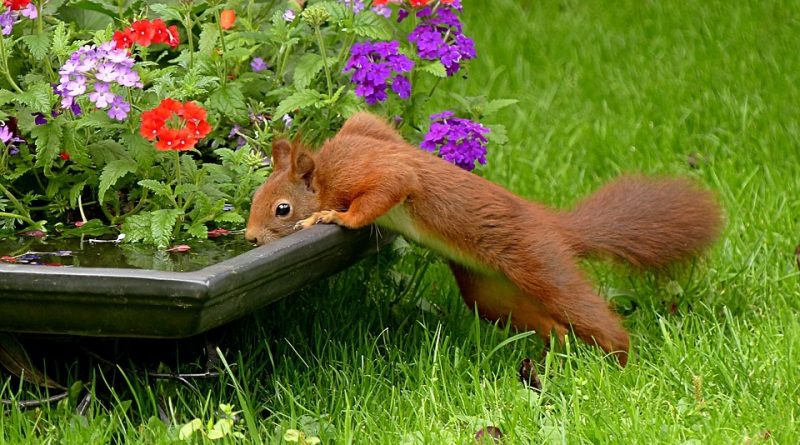 The European common squirrel or red squirrel (Sciurus vulgaris, Linnaeus 1758) is a small mammal belonging to the Sciuridae family.

Geographical Distribution and Habitat –
The Red squirrel is a small mammal widespread in a vast area that includes Europe and northern Asia, from the Caucasus to Japan and China.
It is also present in Italy both in the Alps and in the Apennines with different subspecies, while it is absent on the islands.
This species is present in Italy with three subspecies that are: in the north, Sciurus vulgaris fuscoater, which is also widespread in most of central and eastern Europe; Sciurus vulgaris italicus and Sciurus vulgaris meridionalis which are present only in the center and in the south, only in Italy.
The habitat is represented by woods and forests of both coniferous and broadleaf trees and also, though in a lesser way, is present in the margins of cultivated areas and when it is not disturbed even in the gardens inside the inhabited centers at variable altitudes up to 2,000 m. s.l.m .. 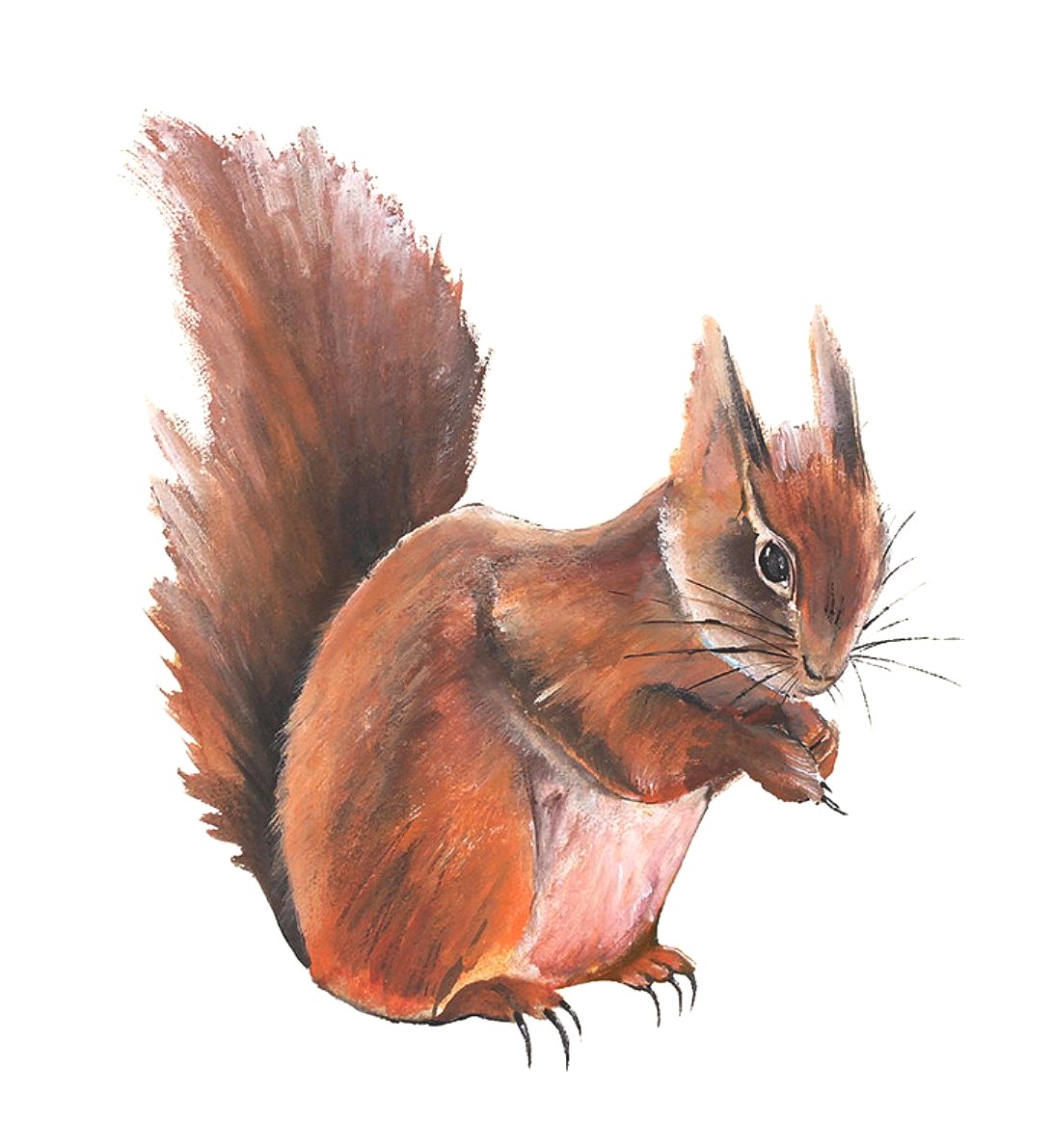 Description –
Sciurus vulgaris is a rodent with a head to body length of 19-29 cm and a tail of 15-20 cm. The back foot is 5.2 -6 cm.
The weight can vary between 240 and 350 grams.
It is recognized by the slender body, the round head with short muzzle, large eyes and ears provided at the apex of a tuft of hair.
The hind limbs are longer than the front ones, which have five fingers provided with strong and curved nails, while the posterior ones are narrower and longer.
The hind legs, which are longer than the front ones, allow the animal to move with great agility on the ground, while the strong nails and the plantar pads allow it to climb with surprising skill on the trees. The common squirrel, like most arboreal squirrels, also possesses sharp and curved claws that allow climbing on trees, even on overhanging branches.
It is distinguished by having a tail entirely covered with hair that is curved on the back. The presence of the long tail is used by this animal to jump from one tree to another and to run along the branches, ensuring their balance. In addition, the tail has a thermal function, as it helps maintain body heat during sleep. Moreover, during courtship phases, it serves as a visual signal and is raised and shaken in a very special way.
It has a coat with quite variable coloration which is however essentially reddish brown with white lower parts, in the summer period, to then become gray in the winter period.
These different shades seem to be determined by various factors related to climate, vegetation cover, nutrition, as well as genetic factors. The lower part of the body is always white.

Biology –
The biological cycle of this species begins with a mating phase in which the males identify the females in heat by the smell they emit.
Even if there is no actual courtship, the male mates with the female after pursuing it for an hour.
Usually more males pursue only one female, until the dominant male, which is generally the largest, manages to conquer it. Males and females mate several times and with different partners.
To reach the fertile age the females must reach a minimum body mass and the heavier ones give on average smaller to light. If food is scarce, reproduction is delayed. Females reach sexual maturity in the second year.
The common squirrel is an animal whose mating can take place in late winter, in the period between February and March and in summer between June and July.
The female can have up to 2 pregnancies a year.
For each birth it usually gives 3-4 babies but can even go up to 6 little ones.
The gestation period lasts 38-39 days and the little ones born are not self-sufficient, they are blind, deaf and weigh between 10 and 15 g.
It is the female that takes care of the little ones that cover themselves with hairs around the 21st day of life, while they acquire sight after three or four weeks. The development of the teeth is completed after 42 days.
The young squirrels can feed on solid food only after forty days after birth; epoch in which they can leave the nest to get food on their own, even if the mother will continue to breastfeed her until the complete weaning, around twenty weeks.
The average life of this small rodent is on average three years even if some individuals reach seven years and in captivity even ten. Survival is linked to the availability of seeds to eat during the autumn-winter; from 75 to 85% of young people perish during the first winter, while at the second winter mortality drops to around 50%.

Ecological Role –
Sciurus vulgaris is a rodent with typical daytime habits as it spends the night inside tree cavities. During the good season it accumulates a large amount of food to spend the winter and lethargy. The squirrel does not actually fall into hibernation but into a kind of deep sleep which, during the winter, alternates with moments of activity in search of food. He is a great climber and jumper. It is not very gregarious.
It feeds mainly on nuts, hazelnuts, acorns, mushrooms and fruit, sometimes even small animals such as insects and small birds, then molluscs as well as eggs, fruit, beech, seeds, buds and twigs of fir, larch and pine trees up to the barks and pine nuts. While they gnaw and eat they support the food with the front legs.
Numerous subspecies have been described, some of which are of dubious validity. The species in fact shows a wide variability in the color of the fur, with a range that goes from red to dark brown and with notable chromatic variability in the same individual, often endowed with a belly with a white fleece and a dorsal mane darker than the lateral fleece.
The subspecies of central and northern Italy are characterized by a very variable coloration of the dorsal mantle, as indicated above, while the southern subspecies, present exclusively in Calabria, is completely black with a white belly.
Unfortunately both in Great Britain and in Italy, the species is in sharp decline, due to the introduction of an alien species, the North American gray squirrel (Sciurus carolinensis) accidentally introduced in 1948. This population is expanding rapidly and there is the real risk that may spread in northern Italy and also in central Italy.
This problem represents one of the major threats to biodiversity so much that today, the common European squirrel, is dying out in Great Britain and Ireland but the same problem is gradually occurring, as well as in Italy, France and Switzerland.
A group of Regions and Universities, supported by the European Union and the Ministry of the Environment, has launched an international program to protect the red squirrel. The project is called EC-SQUARE or ROSSOSCOIATTOLO.