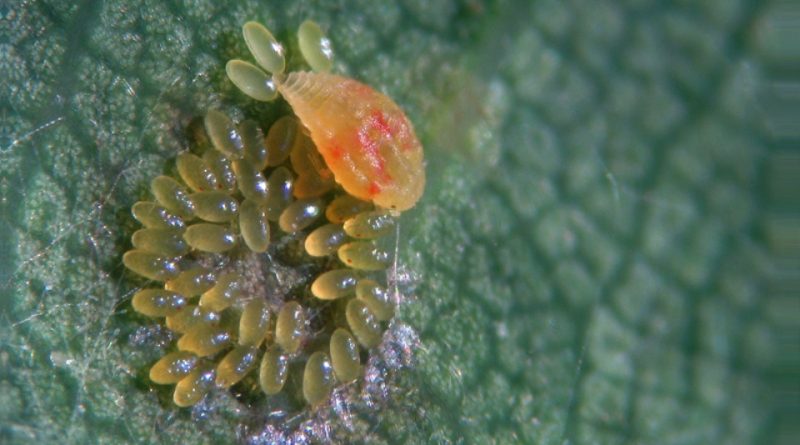 The oak phylloxera (Phylloxera quercus Boyer de Fonsc.) Is a small recollection of the Phylloxeridae family.

Geographical Distribution and Habitat –
The oak phylloxera is an insect that carries out its cycle on Leccio, Rovere, Farnia, Roverella, Cork oak and is very common on various species of oaks present in the avenues, parks and gardens of our cities.

Morphology –
Oak Filloxera is a 1-inch-long recoil of yellow-ocher and yellow-orange color; oval in shape, with a narrower and flattened part of the body in the athereal forms. The winged forms have a brownish-black head and thorax, while the abdomen is yellowish-orange in color; the wings are transparent and larger than the body.
The foundresses, which are parthenogenetic and oviparous, have a globose-shaped body, with a yellow-greenish color and orange spots, light or brownish tubercles.
The fondatrigenie, are parthenogenetic and oviparous, are characterized by the living forms on the evergreen oaks that are similar to the founders, while those present on deciduous species have a flat and elongated body, yellow with orange spots or completely orange.
The winged foundations, parthenogenetic and oviparous, have an elongated body, generally smaller in the forms born on deciduous species; their fundamentally brown appearance, shows orange head and abdomen.
The amphigonics, which are male, are orange in color, with dimensions smaller than the females, which have a light yellowish or orangeish appearance.

Attitude and biological cycle –
The Phylloxera quercus is an insect that hibernates at the egg stage, in the recesses of the rind, or under the leaves of the species with persistent leaves such as the Holm oak.
In environments with milder winters, it can also winter as an adult attera female. When the spring period comes, from the end of March to the budding, it resumes its activity. Thus appear the foundresses who begin their trophic activity on the leaves and on the shoots. The foundresses originate two types of foundations:
– the alien forms that continue to damage the plant on which they wintered, generally with a persistent leaf; in this case the Phylloxera remains on the Holm oak for the entire annual cycle, in fact the winged forms may not even form;
– the winged forms that migrate, at the end of spring, on the deciduous species (Farnia, Rovere, etc.), where they originate some non-native generations; the last of these generations will produce the sessupare winged that will return to the Leccio, to give origin to the amphigonics that will produce the wintering egg.
The oak phylloxera thus performs a number of generations that vary according to the species attacked and the climatic environment considered; on the Leccio generally it completes from 4-5 to 7-8 generations, while on the deciduous species it completes 2-3 generations.

Ecological Role –
The activity of La Phylloxera quercus causes a series of symptoms and manifestations which appear on the leaves with yellowish spots, and subsequently brown, by drying out and with more or less accentuated foldings downwards which cause their curling up.
The damage is caused by all forms, both adult and young, and as a result of their presence, especially if intense, there is, as mentioned, a partial rolling of the leaf margins towards the lower page; moreover, the necrotic notches can be so close together as to cause necrosis even of entire sectors of the leaf.
The affected shoots atrophy, block development and the young leaves curl up on themselves. In the case of serious infestations, defoliation of the plant can occur and in any case the loss of the tops, due to atrophy of the shoots. The necrotic notches form as a consequence of trophic punctures (ocher punctuation), above all of the atterous forms that colonize the lower leaf page; the damage on Leccio is more evident and frequent.
The greatest period of harmfulness occurs especially in spring on young shoots and leaves.
The containment of this insect should be carried out by improving the agro-ecological conditions that favor the presence of its natural enemies which are the same as those of the other aphids. Especially in urban areas, the foliage must be ventilated, the choice of deciduous species together with persistent leaf species, the presence of an urban decor that allows the biocenosis of its natural enemies, such as hedges, shrubs and other furnishings that act as refuge for these.
The fight can be conducted with the use of white oils also activated with products based on Marseille soap or other natural products, against the wintering forms with treatments at the end of winter.
Only in extreme cases should specific interventions be performed and in this case it is carried out against the first spring forms, during the budding period. In this case, however, we must assess the position of the trees, the interference with useful insects and the natural enemies of the oak phylloxera and, obviously and not least, the presence of people during the treatment period.