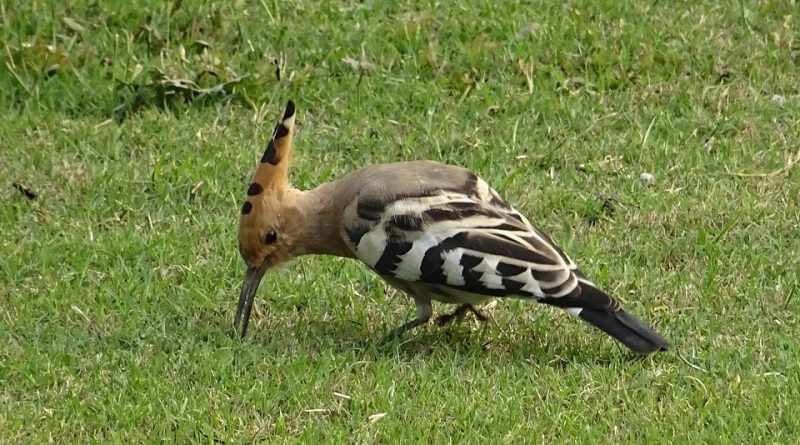 The common hoopoe or Eurasian hoopoe (Upupa epops Linnaeus, 1758) is a bird belonging to the Upupid family.

Geographical Distribution and Habitat –
The hoopoe is a volatile species present in a very large range that includes most of the Palearctic and Afrotropical ecozones: we find it in most of Europe (except, as mentioned, for the British Isles, the Netherlands and Scandinavia) in Africa, to the east as far as Japan and Southeast Asia. Erratic specimens of the saturated subspecies have even been observed in Alaska, near the Yukon delta, as well as specimens of this species are also reported in southern England and even in the north as far as Iceland.
The preferential habitat of the Hoopoe are the dry places, with sandy or earthy soil, presence of sparse vegetation and vertical surfaces (dead trees, poles, walls, barns, abandoned buildings, nest boxes or cavities between the rocks) where the bird can nest.
The hoopoe adapts very well to areas where man is present, so it can be found in a wide range of rural landscapes, such as olive groves, vineyards, cultivated fields, pastures, orchards and urban green areas; on the other hand, the species has abandoned the monocultures present in the most fertile plains.
In Italy, this bird is present everywhere, except in the Alpine Arc and in the highest areas of the Apennines, colonizing rural areas and suburban areas that are not excessively populated. 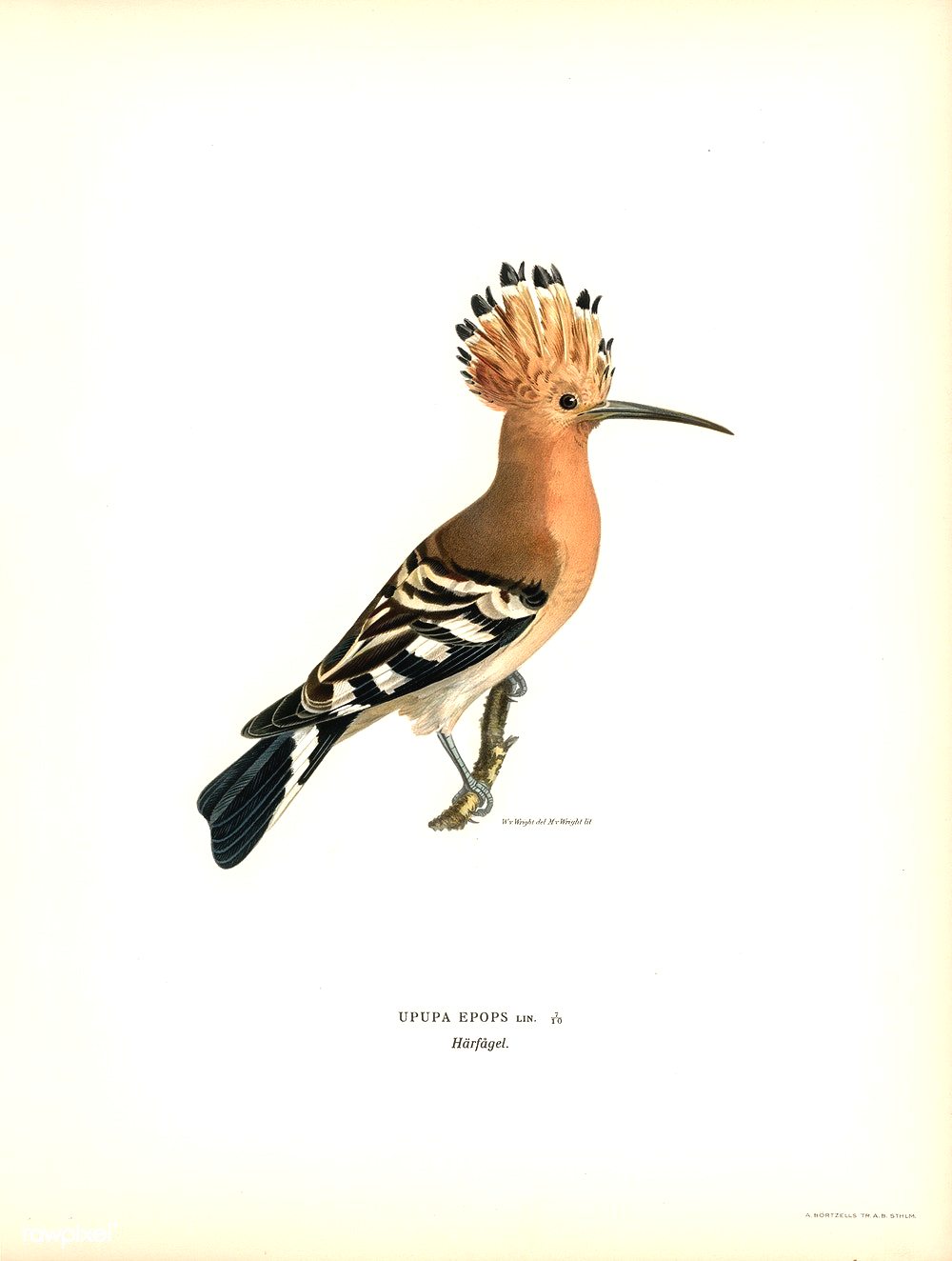 Description –
The hoopoe has a length ranging from 25 to 29 centimeters, with a wingspan ranging from 44 to 48 cm. it has an unmistakable plumage, very light brown in the upper part and white-black horizontal stripes in the lower part. The head is provided with an erectile tuft of feathers; the beak is rather long and thin and slightly curved downwards.
In flight the silhouette is characterized by wide rounded wings and by the long and thin beak; posata appears slender, with short feet and head adorned with a showy erectile tuft of feathers at black apex. The sexes are similar.

Biology –
The male of the Upupa epops, with the beginning of the reproductive period, performs a very simple nuptial parade explaining the crest like a fan: a tuft that can be erected every time the animal is in a state of agitation.
The nesting takes place in the hollows of the trees, in the crevices of rocks or artifacts, such as dry stone walls or rural buildings. The nest also gives off a great stench as it is never cleaned from waste and from the smelly liquid emitted by the uropygium of mother and young. This stench serves to keep predators away and simultaneously attract insects that the hoopoe feeds on.
The brooding lasts 16 days and during this period the male feeds the female bringing her food two or three times per hour. The female, after hatching, stays with the young for at least ten days, even in this period it is only up to the male to feed the family. The young fly around on the twenty-fifth day, ie in the second half of June. There may also be two broods.
Once the breeding season is over, the hoopoes leave for the winter quarters with an inconspicuous migration. The distances traveled are widely distributed, from a few hundred to as many as 1,600 km from the ringing site.
The name of this bird derives from the Latin onomatopoeia of the verse that above all the males are used to emit during the reproductive period, and that sounds like a gloomy trisyllabic hup-hup-hup.

Ecological Role –
The hoopoe is a bird that feeds mainly on invertebrate larvae, large insects, molluscs and spiders. Among these in particular crickets, large caterpillars and larvae, spiders, centipedes, earthworms, snails.
It does not disdain, in some cases, to integrate its diet even with small vertebrates, such as newborn lizards and small amphibians, eggs and even nestlings of birds that nest on the ground, or with material of vegetable origin, such as berries and less frequently also grains.
The hoopoe’s search for food occurs on the ground and in a solitary manner, inserting the long beak up to the nostrils in the ground (or between rocks, piles of dead leaves, dung) until, thanks to the well developed touch, perceives the presence of an underground tunnel: at this point, the animal begins to follow circular paths, continuously probing the ground to identify the tenant of the tunnel. Once found, the hoopoe opens the beak stuck in the ground thanks to the powerful mandibular muscles, in such a way as to be able to capture the prey underground: if it fails to grasp it immediately, the animal has no problem digging in the ground rasping with the strong legs, exposing the tunnels or the burrows where the prey take refuge and then feed on them.
It may happen, even if rather rarely, that these birds feed on the fly, taking advantage of the rapidity and unpredictability of the flight to catch insects, such as bees, hornets or blowflies; this happens especially when the preys are present in huge quantities, like the swarms of flies near the piles of manure.
If the prey is particularly voluminous, the animal repeatedly beats it on the ground or against a rock, in such a way as to overpower it and expose its tender parts.
The hoopoe is a species that tends to migrate south with lower temperatures, and then returns in spring: it can happen however that some specimens stop even during the winter.