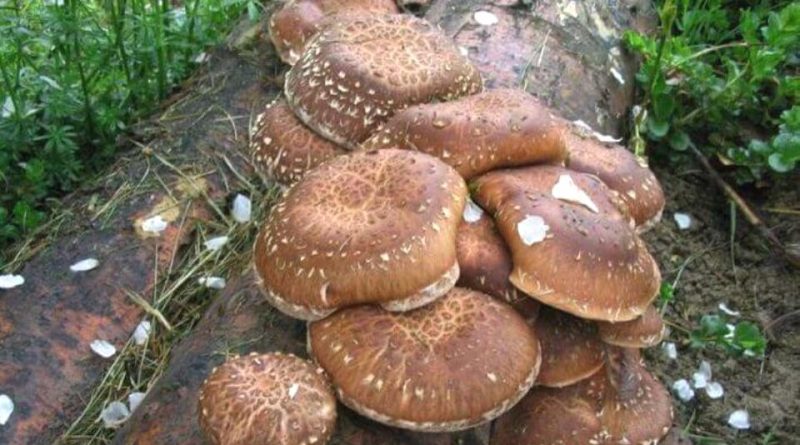 The Shiitake (Lentinula edodes (Berk.) Pegler, 1976) is a basidiomycete mushroom belonging to the Omphalotaceae family.

Systematic –
From the systematic point of view it belongs to the Domain Eukaryota, Kingdom Fungi, Basidiomycota Division, Subdivision Agaricomycotina, Class Agaricomycetes, Sottoclasse Agaricomicetidae, Order Agaricales, Family Omphalotaceae and then to the genus Lentinula and to the species L. edodes.

Etymology –
The term Lentinula derives from tenacious, collapsible, elastic léntus. The specific epithet edodes comes from the Greek ἐδωδή edodé food, food: edible. The common term Shiitake comes from trees, where it grows mainly, of the genus Lithocarpus, Shii in Chinese and from take, mushroom.

Geographic Distribution and Habitat –
The Shiitake is a fungus of Asian origin that grows in autumn and spring on broad-leaved trunks, particularly widespread in the Far East. Today it is the second most cultivated and consumed edible mushroom in the world. 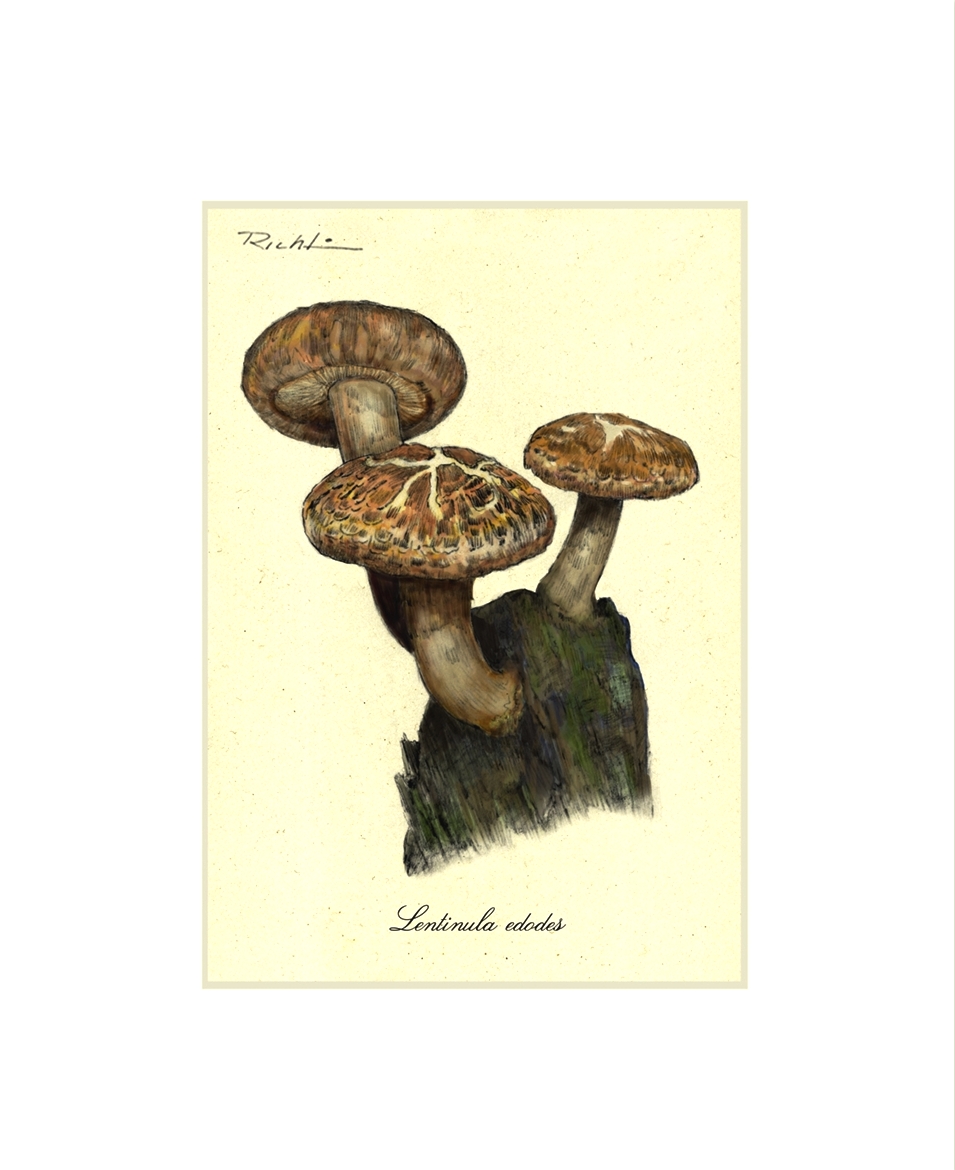 Recognition –
The Lentinula edodes is a fungus that is recognized by its circular or kidney-shaped cap, 5-12 cm in diameter, first convex, then flattened, with a not very evident umbo. The margin is thin and undulating when ripe. It has a brownish-ocher or brownish-violet cuticle, covered with whitish warts, arranged in circles, which disappear with age. The lamellae are white, then ocherous, reddish-brown when broken; adnate, then free. The stem of 3-5 x 1-1.5 cm in diameter, is quite robust, stocky, ventral or eccentric, white at the top, white-ocher streaked in the remaining part. It has an ephemeral ring, made up of residues of the curtain, whitish or brownish-brown. The flesh is whitish in color with a faint odor and a sour taste. The microscope shows subcriolic spores, white in mass, of 5-7 x 4 μm.

Cultivation –
Shiitake is a widely cultivated mushroom in the world, especially in the Far East. Its cultivation is done both indoors on sterile substrate in bags, and in semi-natural conditions on inoculated wooden blocks; the former allows for greater productivity in less time. In the wild it grows saprophytes on wood of fagaceae, in particular Pasania spp. The substrate in bags is prepared from straw, corn stalks, wood sawdust, with added wheat or rice bran, corn, soy flour, urea, etc .; the addition of starch sources in fact allows for higher yields. For details of the cultivation technique refer to the following sheet.

Uses and Traditions –
The Lentinula edodes is a fungus of excellent edibility. Its cultivation originated in China around 1100 BC. and it has spread especially in the East. The first mention of the consumption of shiitake in Japan dates back to 199 AD. The first writings of the cultivation of this mushroom can be attributed to the Chinese Wú Sāngōng (吳三公, 1130-1208). The Book of Agriculture by Wang Zhen, written during the Yuan Dynasty (1271-1368), in which the author traces the use in the kitchen of this mushroom until the Han Dynasty (202 BC-220 AD). shiitake is nutritious, rich in protein (the content corresponds to about 17.5% of the total dry matter), with nine essential amino acids. It also contains substances that promote the control of blood pressure, the reduction of cholesterol level, the strengthening of the immune system and the inhibition of the development of tumors, vírus and bacteria. Currently scientific studies are underway on the anti-cancer effects of this species. In addition, other research has shown that Lentinula edodes: stimulates the immune system, possesses antibacterial properties, antiviral properties (including anti-HIV). Lo Shiitake contains a protease inhibitor and reduces platelet aggregation.Also the Active Hexose Correlated Compound (AHCC) is an α-glucan that has been isolated from Lentinula edodes. AHCC is a well tolerated substance that has antioxidant activity and is metabolised via the CYP450 2D6 pathway. According to some researches, AHCC has the following properties: it increases the resistance to pathogens, produces anti-cancer effects and increases the immune function. A latent compound isolated from the Lentinula edodes, ie the lentinane, is a compound that is used as an anti-tumor agent intravenously in some countries. Some studies have shown that lentinan has anti-cancer properties; other research has associated the Lentinano with a higher life expectancy, a better quality of life, and a low incidence of tumors. The Shii-take, widely used in the food and nutraceutical fields, has been used for millennia in Traditional Chinese Medicine for its properties in the prevention and treatment of many diseases. The effects of Shiitake on the cardio-circulatory system are also positive as it promotes the lowering of blood pressure and cholesterol levels. Interesting doses of vitamin D, which allows the fixation of calcium in bones and teeth, and B vitamins, which support all metabolic functions.

Preparation Mode –
Fresh Shiitake mushrooms, a source of insoluble fiber that keeps the intestines healthy, are excellent raw in salads with thyme, pink salt, linseed oil and soy sauce. Hard and fleshy, stewed are a tasty side dish or a stuffing for baked potatoes and savory pies, to try with leeks, pumpkin, garlic, parsley and a drizzle of olive oil. for their preparation, however, you have to be careful: it is good to use a pan with the lid because they are easily dehydrated and, to remain soft, it is better a sweet cooking, with a lot of steam. Also pay attention to the stems: they are always a bit ‘woody, you need to eliminate them almost completely. Finally, remember that dry Shiitake need a rather long soaking, even an hour, starting with hot water.