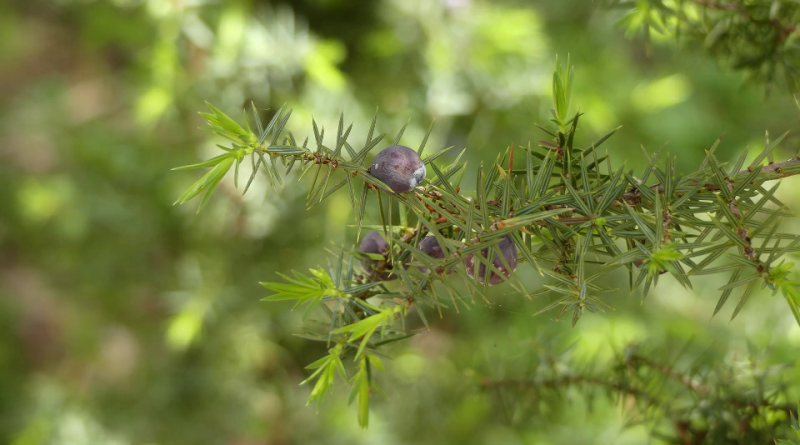 The red juniper (Juniperus oxycedrus L.) is a species with shrub bearing belonging to the family of Cupressaceae.

Systematics –
From a systematic point of view it belongs to the Domain Eukaryota, Kingdom Plantae, Subarign Tracheobionta, Superdivisione Spermatophyta, Division Pinophyta, Classe Pinopsida, Order Pinales, Family Cupressaceae and then to the Genus Juniperus and to the Specie J. Oxycedrus.

Etymology –
The term Juniperus comes from iúnix heifer and from pário, giving birth, giving birth: for presumed properties favoring childbirth. The specific epithet oxycedrus derives from the Greek ὀξύς oxýs, acute, pointed and from the genus Cedrus cedar: with leaves like those of a cedar, but sharp. 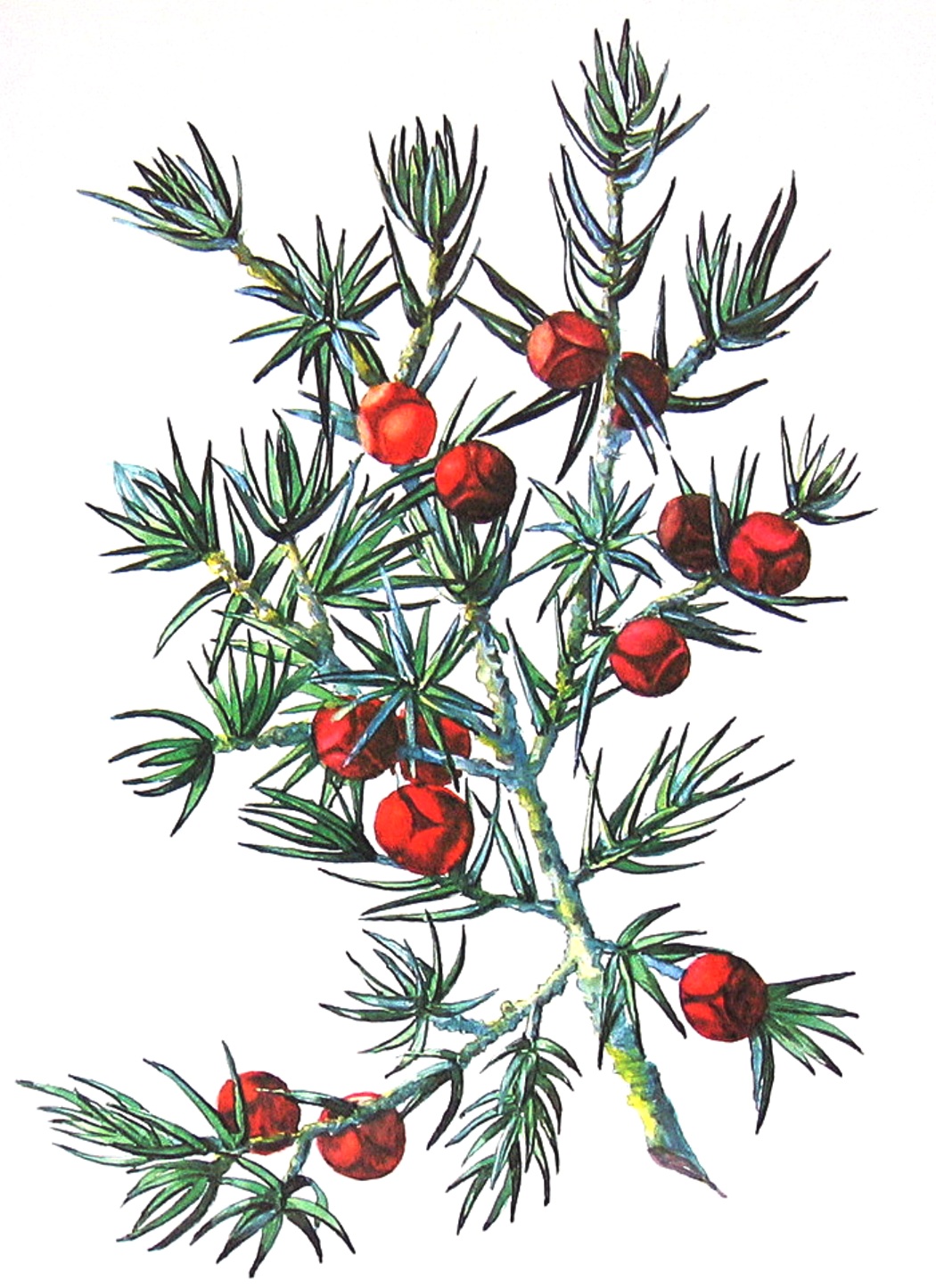 Description –
The Juniperus oxycedrus is a spcie with erect bearing like the common juniper, which can exceed eight meters in height. Unlike the common juniper, however, the needles have two white lines instead of one; said white lines are the rows of stomata. They are arranged in verticils of 3, with rigid acicular lamina, with two white stomatiferous bands on the upper page, the remaining portion is greyish-green in color, the apex is cuspidate and somewhat pungent.
The flowers are of solitary strobili or, more rarely, in whorls of a few elements, at the axils of the leaves; the male ones are brownish-yellowish and are formed by pollen bags protected by triangular squamettes; the female ones, on the other hand, carry scaly fleshy scales and weld each other after fertilization to form galbuli. The flowering period is between February and April.
The fruits are spherical galbuli, first of a green color, then, when ripe, reddish-orange, with an evident scar (due to the welding between the strobilus scales) in the shape of a three-pointed star at the apex; these ripen in 2 years and, if opened, have a pleasantly balsamic smell but an acrid taste. Each galbulo contains up to three roughly oval and angular seeds, immersed in a particularly fibrous pseudo-pulp and amalgamated with resins.
Another subspecies is Juniperus oxycedrus L. ssp. macrocarpa, whose common name is “coccine juniper”; it is characterized by larger galbuli and greater rarity. Also this subspecies has two white lines in the needles, but these are shorter and the plant has a less vertical bearing. In addition, the cuddly juniper grows on the sandy coastal stretches of the shores of the Mediterranean.

Cultivation –
For the cultivation of the red juniper, remember that it is a very resistant plant that adapts well to any climate. The luminous need is different because this plant needs so much light. It grows well even in conditions of partial shade, but it is mainly recommended a full sun exposure. As for the soil, it must be considered that it does not like very damp soils and adapts to almost all soils, even if it prefers those with neutral or alkaline pH.
The multiplication of the juniper can occur by seed or by cuttings. In the first case the germination will be more difficult and slow (the seed must be planted in the spring), while with the reproduction by cuttings the way to go is downhill. The cutting must be taken in spring, preferring young branches that have recently developed.

Uses and Traditions –
From its stem of the Juniperus oxycedrus it is obtained a precious, dark and fragrant wood, hard to work with. In Italy, cutting is prohibited. It also supplies a vegetable tar still used today in local skin affections, incorporated in ointments.
The galbuli of this species contain: potassium salts, iuniperina which is yellow, sugars, malic acid, cadinene and wax. Needles and wood the essential oil of falling which contains: phenols, cadinene and a cetone.
Unlike the Juniperus communis its berries do not have a nutritional value. In fact, this plant is included in the list of the Ministry of Health for the employment not admitted in the field of food supplements.
It is used instead for dressings on the epidermis; for this necessity we use the oil extracted from the bark and from the fruits (oil cadino), the same oil is used for problems with the scalp and in glass as an antiparasitic, antiulcerose of horses and sheep.
The galbuli and branches have a balsamic action of the respiratory tract. In the Great Medicinal Herbarium of Tommaso Palamidessi, Mattioli is quoted as suggesting the use of chopped green wood and boiling until the liquid obtained is reduced and then placed in a tank where the gout patient was placed, a treatment that had to take place for more days, even alternate, until healing of the gouty.
In ancient Greece and in Egypt the oil extracted from Juniperus was used to embalm the dead.
Some peoples of warm countries boil the bones to get a dye to color the fabrics. Berries are food for numerous animals.
The wood of red juniper is very hard and resistant to putridume, used for cabinet-making and for making charcoal.

Preparation Mode –
In addition to the digestive properties of Juniper, this plant can also be used at the table during a meal. Especially in the past it was considered a very important ingredient in traditional cuisine. The Romans often used Juniperus as a valid substitute for pepper, perfect to accompany foods with a strong flavor. Its particularly acidulous flavor represented an important ingredient of the great cooks of the past, who exploited this characteristic to lower the intensity of the taste of dishes based on game. Vice versa, it can be used to give more flavor to more delicate dishes.
Nowadays, even if present in a lesser extent in the kitchen (often the berries accompany roasts and stews or squeezed for tasty jams), the Juniper is mostly used for the preparation of tasty alcoholic beverages. Fermented juice is an important ingredient to obtain strong-tasting, but always pleasant, acidulous and pungent beverages. One of the most sought-after drinks based on juniper is a particular gin, which is obtained through a long and complex process of distillation, in which the berries play a fundamental role.
The Italian region that boasts the greatest use of Juniperus in the kitchen is Trentino Alto-Adige. As well as spirits and various drinks, in the local culinary tradition, there are also many dishes based on potatoes, sauerkraut and “cuddle”. Also famous is the smoked juniper for speck and other cured meats.