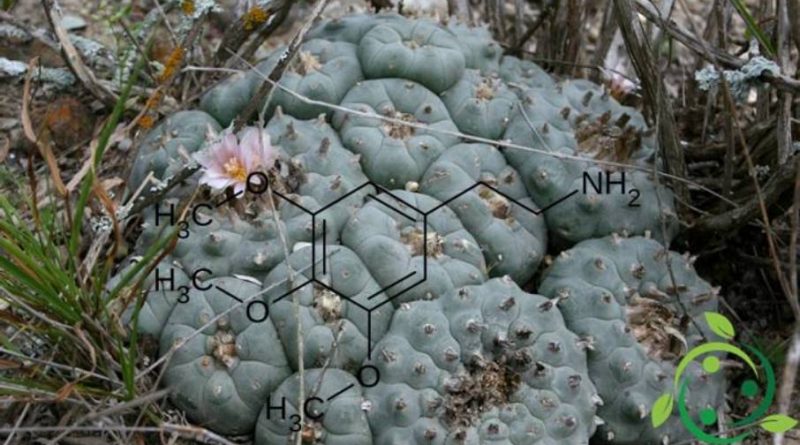 Mescaline is a psychedelic alkaloid mainly contained in Peyote (Lophophora williamsii) which is a succulent plant of the Cactaceae family, native to the Mexican desert. The mescaline formula is: 3,4,5-trimethoxy-β-phenethylamine. This alkaloid has long been used in shamanic rituals by the original American peoples and has become widespread in the 1960s, only to be gradually supplanted by LSD, which is more readily available and has similar effects.
The mescaline was isolated in 1897 by the German chemist Arthur Heffter and later synthesized in 1919 by Ernst Spath.
This alkaloid was the object of experimentation by German and American governments in the 1940s. Later, in the fifties, following the studies of Dr. Humphry Osmond and other events, including literary, became known and used mainly in psychedelic and hippie culture of the sixties and seventies and will be inspired, along with LSD and other psychedelics to numerous groups musical and political / cultural.

Subsequently, in 1970, mescaline was declared illegal in the United States and progressively in other states. Despite these rules, at the beginning of the 1990s, it will be authorized, according to the principle of religious freedom, to the Church of the Native Americans (NAC), also known as Peyotism and Peyote Religion.
The use of mescaline often manifests itself with nausea and vomiting, which disappear within an hour to make room for considerable salivation that is gradually accompanied by fading, the disappearance of feelings of hunger, fatigue and thirst. Another symptom is the increase in heartbeat and blood pressure. These symptoms appear within one to two hours of intake.
These sensations follow a subsequent phase with sensory hallucinations and sensory amplification. The symptoms last from 4 to 8 hours, but can last more than 24 hours with higher dosages.
In general, the effects of mescaline are considered almost identical to those of LSD except for the shorter duration.
One of the most characteristic sensations of mescaline, especially at high doses, is that of the “dissolution of the ego”, ie the loss of the perception of the separation between the ego and the surrounding environment with the perception of being de localized.
Mescaline, like all hallucinogens, is neither addictive nor abstinent, but a psychological dependency can be established, albeit rarely.