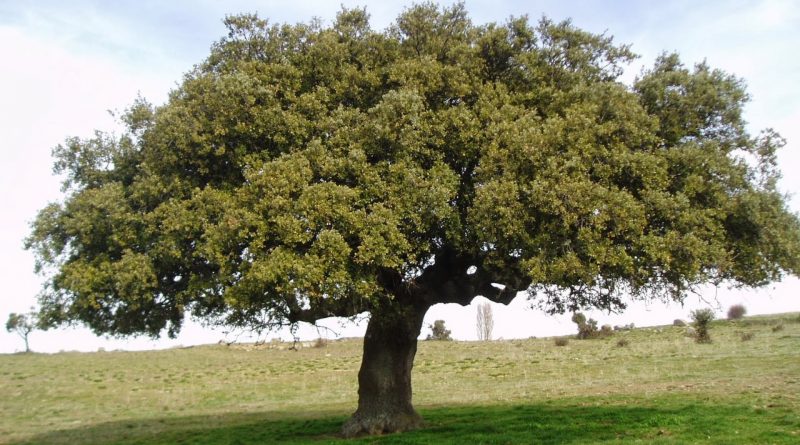 Leccio (Quercus ilex L., 1753), also called elves, is a spontaneous tree of the Fagaceae family and of the genus Quercus. This plant is widespread in the Mediterranean basin countries and is widely used for its precious timber.

Systematic –
From a systematic point of view it belongs to the Eukaryota Domain, the Kingdom Plantae, the Magnoliophyta Division, the Magnoliopsida Class, the Fagales Order, the Fagaceae Family and then the Quercus Genus and the Specie Q. ilex.

Etymology –
The name of the genus according to some originates from two terms derived from two Celtic words, “Kaer” “quer” meaning: beautiful tree, that is tree par excellence; according to others it would come from rough Greek, indicating the characteristics of wood of such plants; the specific name derives from the Celtic language and means “tip”. For the Latins was the elf, whose leaf is prickly; Ilex = leccio

Geographic Distribution and Habitat –
Leccio is present throughout the Mediterranean basin (with exception in Egypt); in Libya has probably been introduced by man. This species is still widespread in the western part, especially in Algeria and Morocco, throughout the Iberian Peninsula (where it forms one of the major components of dehesa), Mediterranean France and Italy, where pure wood forms are also of considerable size. In the eastern sector, starting from the Balkans, however, it is found in woods mixed with other forest essences, often far apart, and only in stations with adequate humidity. It is, always associated, also along the Turkish Black Sea coast.
In Italy, leccio is spread mainly in the islands and along the Ligurian, Tyrrhenian and Ionian coasts. On the Adriatic side populations are more sporadic and disjointed (except in Apulia, Abruzzo and Marche). Small formations are also present in the Prealps along the coasts of the lakes, on the Euganei Hills, Friuli Venezia Giulia, Romagna up to Bolognese-Imolese and in the Mesola Forest in Ferrara.
The leccio is one of the most typical and important representatives of the evergreen Mediterranean oaks, and is the typical representative of Quercetum ilicis, the vegetation of the Mediterranean temperate range.
Of the leccio there are two subspecies:
Quercus ilex subsp. ilex. native to the area from the north of the Iberian Peninsula to East of France to Greece. Leaves very close; 2 cm long acorns, with bitter taste.
Quercus ilex subsp. rotundifolia (Q. rotundifolia, Q. ballota) native to the area from the south of the Iberian Peninsula to the northeast of Africa. Leaves work; 2.5 cm long acorns, with a sweet taste. 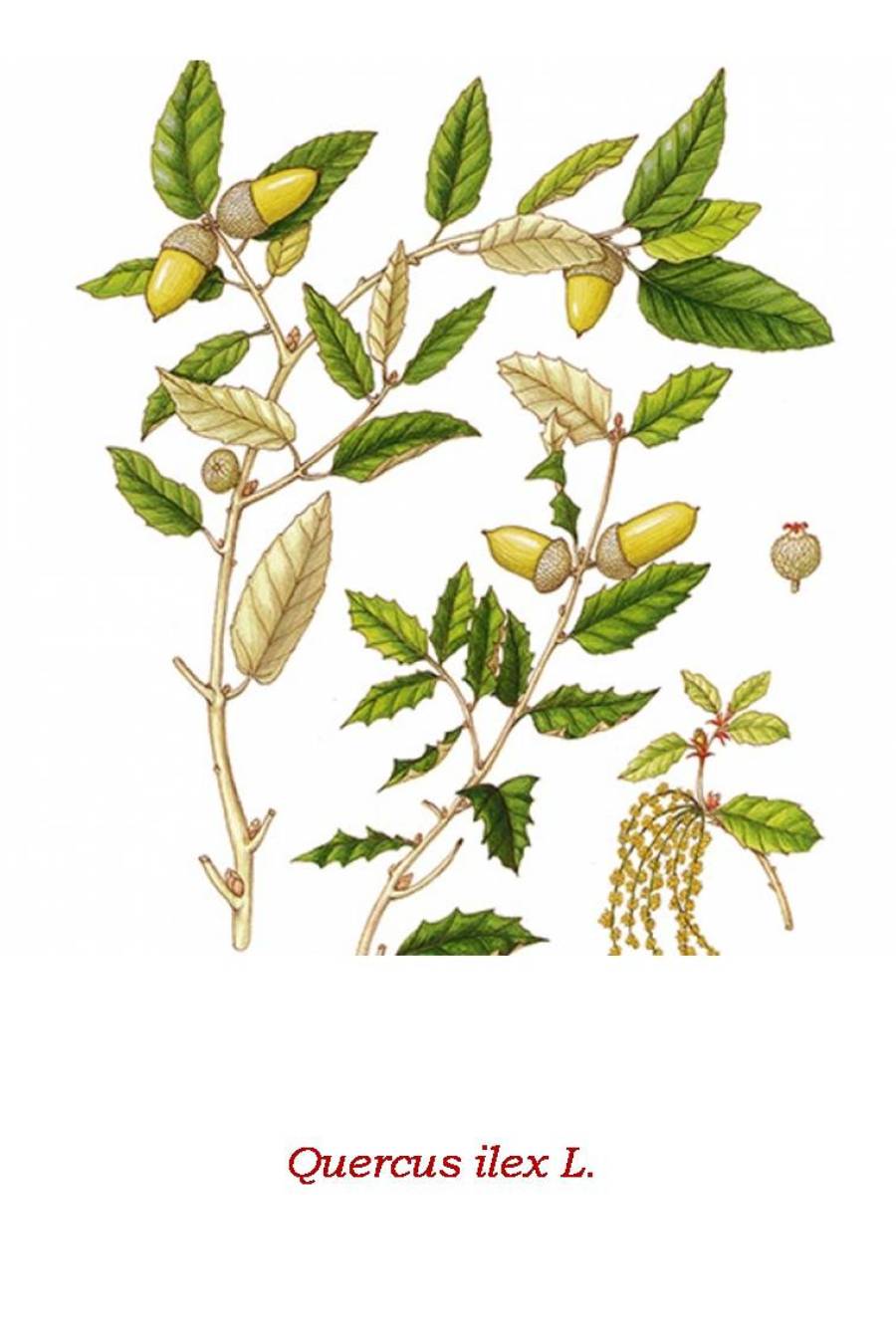 Description –
Leccio is a tree, evergreen and dandelion, with a seldom straight stem, single or divided at the base and with a development that can reach up to 20-24 m in height. It may be bushy when it grows in rocky environments. It is very long, becoming multi-centric, but has a very slow growth.
The bark of this tree, which is smooth and gray as a young man, in time becomes hard and dark almost blackish, finely chapped in small persistent plates of nearly square shape. The young branches of the year are pubescent and gray, but after a while they become glabrous and grayish-greenish. The buds are small, tapered, rounded with a few pearls.
The leaves of this species are simple, with a full-edge or toothed blade, very variable in the shape of an elliptical lanceolate (rotundifier in the rotundifolia subspecies), the base is cuneated or rounded. It has a superior page of dark green and glossy green leaf, but the lower is greyish and markedly tomentosa. The leaves are 3-8 cm long and 1-3.5 cm wide. The center rib is straight and there are 7 to 11 pairs of side ribs.
Leaves that remain on the plant 2-3 years are provided with short, hairy petiole, with chinchillas, linear and soon fallen.
In the quercus ilex there are two types of leaves (heterophillia): those apical and those of young specimens that are ovary, with mucronate or spinous teeth, with the lower side of the lower face, and some trichomes on the upper side.
The leaves of the plantule are hairy, almost white to germination, then become glabrous, but the young fusticine continues to be thickly pubescent.
In Quercus ilex there are male and female flowers. So the plant is monotone.
The male flowers are assembled in pendulous, cylindrical and pubescent movements, they have perianzio with 6 lobes and 6-8 stamens. Feminine flowers are pedunculated ears composed of 6-7 flowers, each flower has perianzio esalobato and 3-4 stigmas. Male aches are 5 to 7 cm long and are brought to the base of the branches of the year. Flowering takes place from April to June.
The fruits of the quercus are called acorns (or leeks) and are carried individually or in groups of 2-5, on a peduncle of about 10-15 mm (exceptionally also 40 mm). The size varies from 1.5 to 3 cm in length, for 1-1.5 cm in diameter. They are of dark brown color to maturation, with more noticeable streaks.
At the top of each acorn we find a strong mucron. The acorns are covered for a third or half of their length by a cupola provided with distinct scales, with free but not divergent tips. They mature in the same year of flowering and autumn.
The root system is robust, fitting, develops from the early years of life and can penetrate several meters in the ground for which it gives particular resistance to the fringe of the soils where this species is found. This results in considerable drought resistance (the plant finds deep water), but also transplant problems, which this species suffers. Even the lateral roots can be very strong and often emit pollen.
The oak wood is porous with a reddish color, while the sapwood is light in color. It is a hard, compact and heavy wood, subject to embarkation, difficult to work and to season. It is mainly used as fuel and for the production of vegetable charcoal. Leaf wood is one of the most tannic ones you know. When freshly cut fresh leccio wood sticks an iron nail, after a few hours you can notice a small blue dagger that surrounds the nail. This ring is a wood toss due to the reaction of tannins with iron and is a typical phenomenon of this and other plants with high content in tannins.

Cultivation –
Like all forest plants, Quercus ilex must be treated with particular pedoclimatic and agronomic needs. As far as the soil is concerned this species has no particular needs. However, it prefers soil not too damp, with good drainage. It has higher growth in volcanic and coastal areas, while in rocky limestone terrain it has a smaller growth. In humid areas of the inland it has stunted growth and is often overwhelmed by more suitable species.
Propagation is done by seed. When the acorns ripen in the autumn these are harvested and sown within two months in an open pot. Subsequently, the young seedlings will be transplanted into the soil and put to rest within three years. Young trees grow more vigorously if they are mulching with organic material.
The leccio prefers exposure in the sun, but it also endures half the shade.
Quercus ilex does not need regular pruning.
As for parasites, there are problems with the attacks of caterpillars and larvae, but also of the good family. The specimens are more vulnerable at a young age, those adults are more susceptible to parasites.
Although the cultivation of the leccio is of forestry interest, it is necessary to reconsider the possibility of introducing it to farms at the margins of crops (where shadow does not disturb the normal crops), in the slopes to safeguard soil stability and as a renewable energy supplement (biomasses) and animal feed through the production of acorns.
Unfortunately, modern agronomy has marginalized these plants, complicating even more the delicate ecological balances of modern agriculture.
Its reintroduction is therefore again needed through incentive programs and agricultural integration.

Preparation Method –
In the past years, the use of oak fruit was also known.
As mentioned, the acorns are edible both raw and cooked and, after roasting, can be used as a substitute for coffee; dried and powdered, can be used as a thickener, such as potato starch, or, mixed with cereal flour, to make bread. However, as they contain tannins, it is advisable to wash them thoroughly under running water before using them for food purposes; This procedure, however, involves the loss of much of the mineral salts contained therein. The traditional way to prepare them was to bury them in wet soil and leave them throughout the winter, dissecting them in spring, close to germination; at that point they lost much of their astringent power.
As for other uses, it is emphasized an old recipe for a “coffee” made with dried acorn powder, which is said to be suitable for youth acne problems.