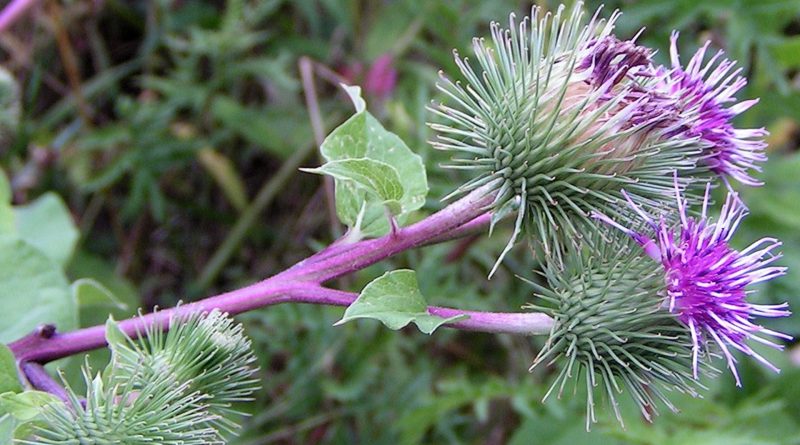 The greater burdock (Arctium lappa L., 1753) is a herbaceous plant, erect, two-year, which belongs to the Asteraceae family.

Etymology –
The name Arctium, like many others, was introduced in the systematic by Linnaeus, but certainly the origin is older. Arctium in greek means bear. Probably it refers to the villi and shaggy appearance of the plant.
The species name could derive from the Celtic: Llap that in this language it means hand. In fact, the flower, like a hand sticks to whatever the next steps.
While another etymology derives from the greek: Labein (sticking), always referring to the fact that the fruit is attached to clothing and animal hair.
The plant is known since ancient times. There are also records of ancient date of its cultivation as a vegetable and medicinal plant.
The scientific binomial of the plant of this entry has been defined by Carl Linnaeus (1707 – 1778) Swedish biologist and writer, considered the father of modern scientific classification of living organisms, in the publication of Species Plantarum 1753.

Geographic Distribution and Habitat –
Plant quite common throughout the peninsula, but it is very rare in the islands. This plant grows mainly in meadows, in uncultivated areas of soft and well drained. Weed, spread from the plains to the mountains, in the idle land, near the old walls and paths. Bears very well temperatures also very rigid. It blooms from July to September.
Burdock, which has several therapeutic properties, grows spontaneously a bit ‘all over Italy, from sea level to 1,800 meters above sea level.
In Sicily but to be considered a rare plant. 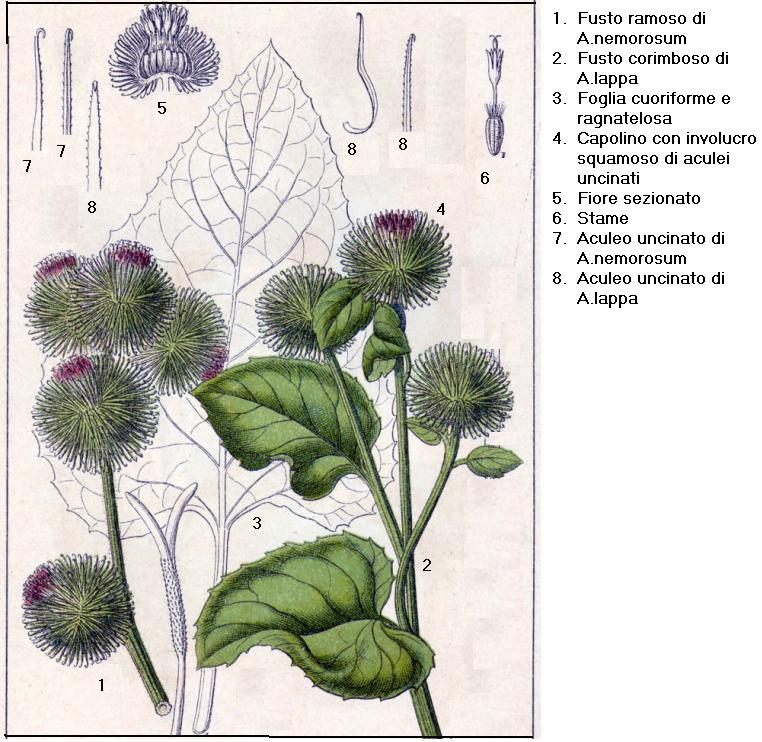 Description –
herbaceous plant, biennial, bushy, with a massive elongated root and numerous stems (1.50 m), robust and branching, furrowed by grooves. The leaves are heart-shaped and very large at the base, are green on the upper side and grayish in the lower. The purple flowers inconspicuous, are assembrati in corymbs enclosed in a casing with hooked bracts (with which remain attached to the clothes) appear in summer.

Customs and traditions –
The burdock contains a number of active principles which make it an active towards plant many medical conditions.
According to the natural medicine, burdock has a diuretic and blood purification, which are among the features that make it more known in the curative use. Burdock contains minerals like calcium, potassium, iron and magnesium. It also contains plant substances antibiotics by antibacterial power.
It has remarkable healing properties and helps to lower the levels of blood sugar. It is considered beneficial for skin problems, as impurities, acne and psoriasis, stomach problems, and wound care.
According to traditional medicine burdock cure blood poisoning, bacterial infections, the difficulties of a diuretic character and states of hyperglycemia. In general the burdock is enhanced for its depurative and diuretic properties and for its ability to stimulate the work of the liver and bile production.

Preparation mode –
Burdock is often used in the form of a decoction made from fresh or dried roots. Drink a cup of decoction of burdock in the morning it stimulates diuresis. Usually you use 1 teaspoon of burdock root every 250 milliliters of water for preparing decoctions diuretics.
Drink two or three cups per day decoction of burdock is a natural remedy that allows you to enjoy the antibacterial properties of this plant. The same type of decoction of burdock roots is used to lower the rate of content of sugars in the blood of diabetics.
The decoctions of burdock, based on roots or leaves, also are used for external use in the form of compresses that are considered beneficial in the case of rheumatism, acne, impure skin and greasy hair. Burdock roots are harvested in the spring, during the second year of life of the plant, while the leaves for herbal use is collected and allowed to dry out between May and August.
The burdock roots are edible. In Japan they are harvested for food use. Even in the popular Italian culinary tradition is present burdock, for example in the form of boiled roots. The leaves of burdock can be eaten boiled with other vegetables.
The burdock fresh leaves are used on wounds, to promote healing, and on boils, to accelerate healing. The Burdock mother tincture is used in herbal medicine to purify the liver. Substances contained in the roots make burdock a real natural antibiotic.
In this case it may be useful to take burdock in the form of decoction. For more information on the uses of burdock, based on your medical condition, you should consult your herbalist trust, which will recommend the best natural remedy depending on the specific case.
Some people might suffer from allergy to burdock. Naturally in this case the assumption of burdock, under any form, is contraindicated. Burdock is contraindicated in pregnancy, therefore, the suggestion for women who are expecting a baby is to avoid intake. Burdock is contraindicated in pregnancy for its possible action on the uterine muscles.
Given its hypoglycemic power, burdock may interact with some drugs recommended for diabetics. In general there were no adverse or toxic effects of burdock in those who have complied with the therapeutic doses given to the doctor and dall’erborista. Will have to be careful with burdock, and avoid it, people who know they are allergic or hypersensitive to Asteraceae.