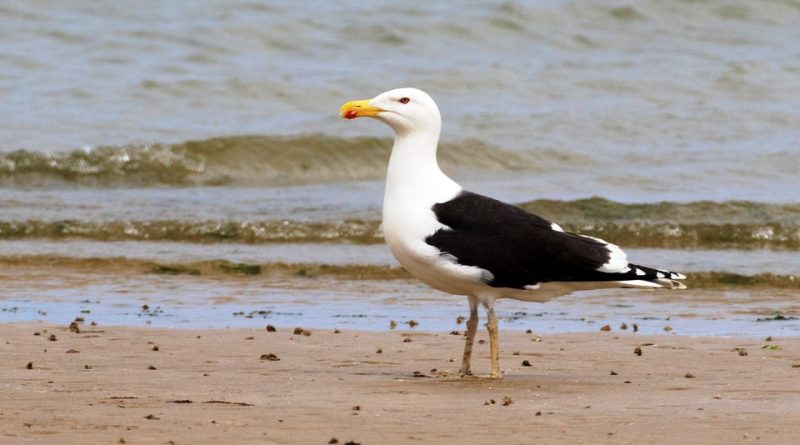 The great black-backed gull (Larus marinus, Linneus 1758) is a bird belonging to the Laridae family.

Geographic Distribution and Habitat –
The great black-backed gull is a bird that nests on the European and North American coasts and islands of the North Atlantic and is quite sedentary, although some move further south or inland to large lakes or reservoirs.
In detail, it is a species that nests in the coastal areas ranging from the extreme north-west of Russia, through a large part of coastal Scandinavia, on the coasts of the Baltic Sea, up to the coasts of north-western France, the United Kingdom and Ireland. Across the northern part of the Atlantic, this gull is distributed in Iceland, the Faroe Islands, southern Greenland and on the Atlantic coasts of Canada and the United States.
Although in the past this species visited without reproducing the areas south of Canada, in recent times it has spread with some colonies in the states of New England and now reproduces as far as southern North Carolina. Individuals that breed in more hostile environments will migrate south, overwintering on the northern coasts of Europe, from the Baltic Sea to the south of Portugal, and regularly to the coast of Florida in North America.
In the winter period, in the Baltic Sea, the bird usually stays near the border of the frozen areas. North of the Åland Islands, from Sweden to Finland, the sea often freezes, so the bird migrates to open waters. Exceptionally, the species can range as far as the Caribbean and off the northern coast of South America.
Few individuals observed every year in Italy where only a few specimens have been sighted in the Tyrrhenian Sea, in the Po delta and in Puglia.
Larus marinus is found in a variety of coastal habitats, including rocky and sandy coasts and estuaries, as well as inland wetland habitats, such as lakes, ponds, rivers, wet fields, and moors. It generally lives a short distance from large bodies of water as it moves inland. Today it is a common presence in landfills both along the coasts and inland. The species largely benefits from the presence of dredgers which, in the state of New Jersey, are the most widespread nesting sites.
It generally reproduces in areas devoid or largely inaccessible to terrestrial predators, such as islands with vegetation, sand dunes, flat stacks, roofs of buildings and sometimes among the bushes of islands with the presence of brackish marshes. During the winter it moves to the high seas to feed. 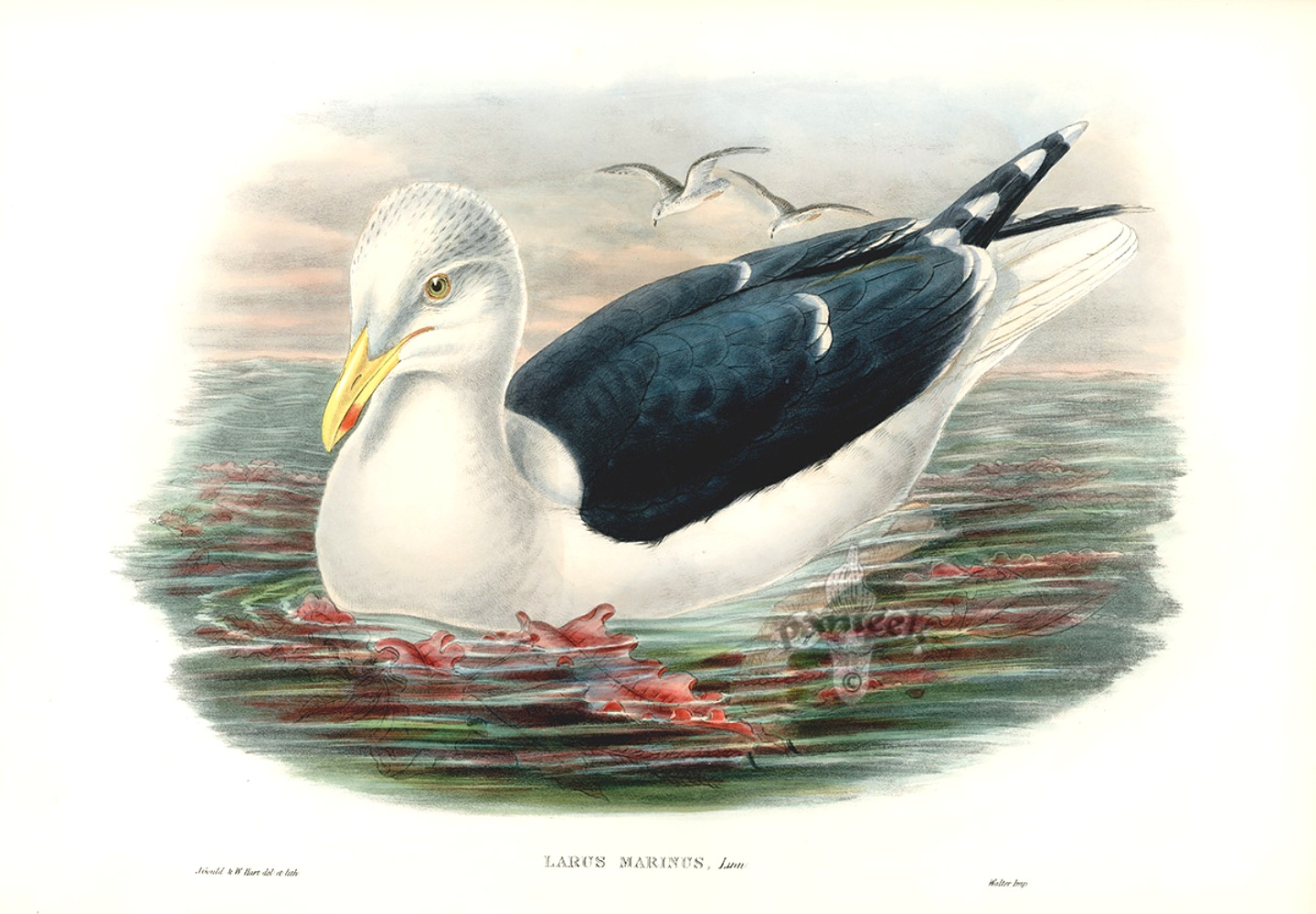 Description –
The great black-backed gull is a seagull with a length ranging between 62 and 80 cm and a wingspan of 150-165 (170) cm, with minimal sexual dimorphism.
The adult male and female have a practically identical livery; they have a white body and head, a very dark gray back and wings, and black wing tips with some white spots.
The legs have a pink hue and the beak is massive and yellow with a red spot towards the apex in the lower jaw.
During the winter, the adults have a fine and slight gray streak on their heads.
The juveniles have a white base color but thickly and heavily stained with dark brown; the legs are pink in color and the beak is very dark brown, almost black; with the passing of winter, the plumage takes on the definitive appearance of the adult.
The eggs are greenish-brown with dark spots and patches.

Biology –
Larus marinus is a bird that nests alone or in small colonies, sometimes in the middle of a Larus argentatus colony.
Adult couples are formed in the period from March to April. The following spring, the same birds usually form a pair again, meeting in the previous year’s nest. If one of the birds does not appear, the other starts looking for a new mate.
This species builds a lined nest, placed on the ground, often atop a rock pile, fallen log, or other obstructing object that serves as a protection for the eggs.
Usually, several scratches are made on the nest before the one deemed best by the parents is selected, after which it is lined with grass, algae or moss or objects such as ropes or plastic. When nesting on rooftops in urban settings, the previous year’s nests are often reused over and over again.
The female usually lays three eggs between the end of April and the end of June. When only two eggs are found in a nest, the reason is almost always that one egg, for one reason or another, has been destroyed.
The female takes about a week to produce the three eggs and incubation does not begin until all three eggs are laid. The chicks hatch on the same day. The birds usually manage to raise all three chicks.
Both parents participate in the incubation phase, which lasts about 28 days. During this time, the birds try to avoid being noticed and remain silent.
Juveniles leave the nest area at 50 days of age and can stay with their parents for an overall period of about six months, although most of the young choose to congregate with others of the same immature species in search of food within l ‘Autumn. These birds reach reproductive maturity when the plumage assumes the adult livery, which corresponds to four years, although they may not reproduce successfully until the age of six.

Ecological Role –
Larus marinus o is a relatively long-lived bird. The maximum recorded age for a wild herring gull is 27.1 years.
It is a species rarely kept in captivity, but some species of seagulls are known to live over 44 years.
Mortality typically occurs early in life, when adverse weather conditions (including floods) and starvation can threaten them, as can predators. The chicks and eggs are prey to crows (Corvus ssp.), Cats (Felis catus), other gulls, raccoons (Procyon lotor) and rats (Rattus ssp.). The bald eagle (Haliaeetus leucocephalus), the white-tailed eagle (H. albicilla) and the golden eagle (Aquila chrysaetos) are the only birds known to routinely prey on the adult Larus marinus.
However, Larus marinus has also been observed engaging in aerial combat with bald eagles, attacking eagles and chasing them away.
In Norway, this species has been reported to prey on the Eurasian eagle owl (Bubo bubo).
Killer whales (Orcinus orca) and sharks also reportedly prey on both adult and juvenile birds in the sea.
As for relations with humans, historically, Larus marinus was hunted for its feathers, which were used in the hat trade, and this species has been eradicated from much of its range due to this exploitation. Today, however, its adaptability to human presence and the use of urban environments as artificial nesting sites has led to a rapid increase in the number and extent of the herring gull. It is now a widespread and abundant species in its range and its number has increased to such high levels in some areas that it is often seen as a pest species, especially near airports where it risks collisions with aircraft, and in some coastal areas where it sometimes outclasses or hunts rarer seabirds.
Furthermore, the increase and expansion of Larus marinus has been attributed to the increase in winter fishing activities in the North Sea.
Although no major threats are known to this species, high levels of toxic pollutants, which are ingested with contaminated prey, are often found in individuals and eggs, reducing reproductive success.
From a feeding point of view, Larus marinus is a very aggressive bird that manages to steal food from many seabirds, gulls, ducks, puffins, guillemots, shag, etc. and often plunders the nests of other seabird species by preying on them of eggs and pullets.
It is therefore a species with opportunistic, predatory and very curious feeding. They get much of their food energy from waste, much of it supplied directly by humans, which locally makes up more than half of their diet. The proliferation of waste or landfills has become a major attraction for this and all other non-specialized gull species in its range.
However, apparently, in an attempt to observe how long they spend looking for food in Massachusetts landfills, Larus marinus were only observed for 19% of their time, eating less junk than other common gulls and spending the most of their time perched or idle.
In any case, like most seagulls, they also catch fish with some regularity than any smaller fish that is near the surface of the water. In fact, when Larus marinus are caught or eaten by other species, the stomach contents of Larus marinus usually show that fish is the main food.
A study of the fish they eat the most confirms that these are: capelin (Mallotus villosus), Atlantic cod (Gadus morrhua), Atlantic cod (Microgadus tomcod), Atlantic mackerel (Scomber obbbrus), Atlantic herring (Clupea harengus) and spear of sand (Ammodytes hexapterus). Other prey items include squid, Jonah crabs (Cancer borealis), rock crabs (Cancer irroratus), sea urchins, green crabs (Carcinus maenas), starfish (Asterias forbesi and Asterias rubens) and other echinoderms, crustaceans and molluscs .
Unlike most other gulls, Larus marinus are highly predatory and often hunt and kill any prey smaller than themselves, acting more like a bird of prey than a typical gull.
This bird, while lacking the sharp claws and curved, lacerating beak of a raptor, relies on aggression, physical strength, and stamina when hunting.
Most foods are ingested whole, including most fish and even other gulls. When foods are too large to swallow at one time, they are sometimes stirred in the beak until they fall apart. Like some other gulls, when they catch mollusks or other hard surface foods such as eggs, they fly through the air with their prey and then drop it onto rocks or firm earth to open it. They also feed on alternative foods, including berries and insects, when these are available.
They take advantage of easy food sources, including the opportunities offered by fishing from boats at sea. They are skilled kleptoparasites who take advantage of fish and other prey captured by other birds, dominating other gulls when they encounter them. Occasionally they also attack nestlings and newborn terns.