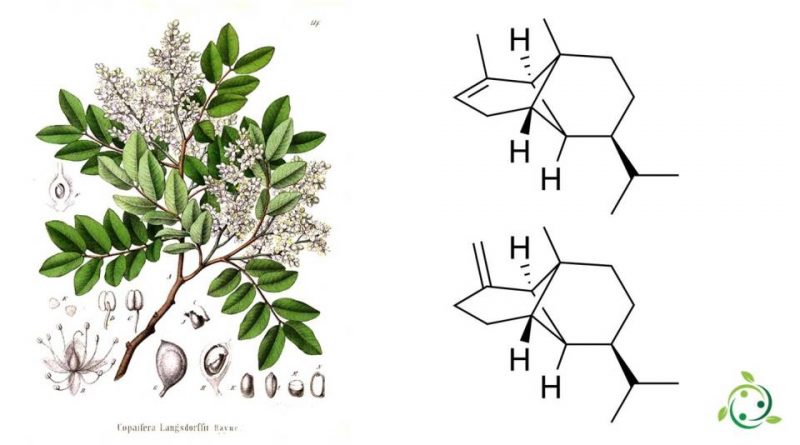 Copaene, whose term in the official IUPAC nomenclature is: α: (1R, 2S, 6S, 7S, 8S) -8-isopropyl-1,3-dimethyltricycle [4.4.0.02,7] dec-3-ene is a hydrocarbon present in nature.
This substance has a brute or molecular chemical formula: C15H24.
Copaene, or more precisely α-copaene, is the common chemical name for a hydrocarbon, with an oily liquid appearance, found in a number of essential oil producing plants.
The name copaene derives from that of copaiba, an oleoresin obtained from the trunk of several South American legumes of the genus Copaifera.
The copaene was isolated for the first time in 1914 by extracting it from a copaifera (Copaifera langsdorffii Desf.) Which, like other plants of the same genus, produces resins.
The structure of the copaene, including chirality, was determined in 1963.
The double bond isomer with an exocyclic methylene group, namely β-copene, was first reported in 1967.

Copaenes are tricyclic sesquiterpenes. They are chiral molecules and the α-copaene enantiomer most commonly found in higher plants exhibits a negative optical rotation of approximately -6 °.
The rarer (+) – α-copaene is found in small quantities in some plants. This substance is of economic importance because it is an attractant of an agricultural parasite, that is of the Mediterranean fruit fly (Ceratitis capitata Wiedemann, 1824).