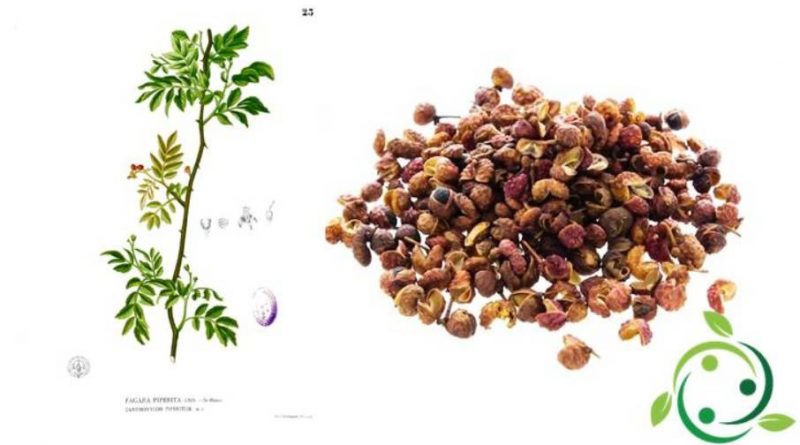 Japanese pepper is a small berry of the plants of the genus Zanthoxylum and in particular from the Zanthoxylum piperitum (L.) DC., 1824, heavily used in Asia as a spice.

Origins and History –
Japanese pepper is a spice not to be confused and not to be used as a substitute for the real one that is also in circulation with other names, depending on the country that uses it.
In China it is known as huājiāo (花椒; literally “flower pepper”) and with the less common name, shānjiāo (山椒; literally “mountain pepper”, not to be confused with another spice that bears this name: the pepper of Tasmanian mountain).
In Japan, however, it is called sanshō (山椒) by a readaptation of the Chinese term shānjiāo. They also use the whole leaves of the plant, called kinome (木 の 芽).
In Korea it is called chopinamu (초 피나무).
In Nepal, where it is widely used, it is called timur.
In Tibet it is called gyer ma or e-ma or kham.
In India, depending on the language of the region, it is called in several ways: in the Konkani language it is called tepal or tirphal; while in the regions of Maharashtra, Karnataka, and in Goa it is known as teppal.
In Europe and America it is known by several names; the most common of which is, in fact, Sichuan pepper or pepper flower (from the Chinese name) or fagara (from Zanthoxylum fagara, a plant common in Florida).
It can also be found on the markets, depending on the country of origin, with other names: Chinese pepper, Japanese or Sansho pepper, Nepalese pepper, Indonesian lemon-pepper.
The first cultivations of Sichuan pepper began in the province of Sichuan, located in the southwestern part of China and also known today for its particularly rich and interesting gastronomic tradition.
This spice is widely used in oriental cuisine, in China but also in other countries such as Nepal, Tibet, Bhutan and Japan.

Description –
Japanese pepper is a small berry obtained from plants of the genus Zanthoxylum and its name is due to the fact that the berry can remember a berry of black pepper, even if there is no correlation between the two spices.
This plant produces red berries which, once ripened and dried, divide in half by themselves.
Sichuan pepper has a pungent and at the same time refreshing aroma, it may seem at times similar to that of citrus fruits but with notes of camphor. As for the flavor, very similar but it must be added that, being quite strong, it can also slightly anesthetize the tongue leaving a bitter aftertaste as it also happens with clove.

Properties and Uses –
Japanese pepper is widely used in oriental cuisine, for example in China (especially in Sichuan, from which the spice takes its name), Nepal, Tibet, Bhutan and Japan.
In China, the fruit shells of the genus Zanthoxylum are widely used for therapeutic purposes. In traditional Chinese medicine it finds similar uses to hua jiao, for example in the treatment of gastric or digestive disorders – such as dyspepsia.
The Sichuan pepper, as mentioned, has a particular flavor: it is not pungent like black pepper or chilli pepper, but, after the spicy, it has a light lemon aroma and leaves a slight numbness in the mouth.
Unlike real pepper, the internal seeds are discarded and only the shells that contain them are used; which are usually roasted and ground just before their use in some recipes and are generally added at the last moment, with the fires now off.
In Chinese cuisine it is often accompanied by ginger and star anise. It is usually used for fish, duck, chicken and fried eggplant dishes. It can often be found in the form of Sichuan pepper oil which is used, together with ginger, brown sugar and rice vinegar, in the preparation of fried noodles.
Sichuan pepper is one of the most important ingredients of Tibetan and Bhutanese cuisine; it is used together with garlic, ginger and onion to flavor meat dishes, especially pork.
In Japan it is used in noodles, soups and chicken dishes. They also use the whole leaves of the plant (kinome) to flavor vegetable dishes, especially bamboo shoots, and decorate soups.
Some Italian restaurants have desserts, especially based on strawberries or red fruits, containing this spice.
This spice is also often used in spice blends, among these we remember:
– Mala (Chinese: 麻辣; pinyin: málà; literally “numb and spicy”) is a mixture of spices typical of Sichuan cuisine made with Sichuan pepper and chili pepper.
– Huajiao yan (Simplified Chinese: 花 椒盐; pinyin: huājiāoyán) is a mixture of Sichuan pepper and salt grains, roasted and browned in a wok and served as a condiment for white meats.
– Shichimi: Sichuan pepper is one of the ingredients of the traditional Japanese blend of seven spices called shichimi togarashi.
Among the benefits for the use of this spice, being of the Rutaceae family, like lemons, it can boast an antipruritic and pain-relieving action on the skin. It is also used against painful intestinal spasms and against toothache, in fact in the areas of origin it is called the “tree of toothache”. Also included in traditional oriental dishes, Sichuan pepper has interesting properties because it softens the irritating effect that some foods can have.
Contraindications include that from 1968 to 2005 Sichuan pepper imports were banned in the United States because parts of the plants could be carriers of a plant disease: lemon cancer (all Sichuan pepper species belong to the Rutaceae family , the same family of the lemon); in 2005 the ban was withdrawn but the plant parts that are imported must be sterilized in advance.

Preparations –
Japanese pepper is a common spice in China and therefore simple to find in other countries that use it in the kitchen; in Italy it can sometimes be purchased in herbal medicine but it is better to look for it in shops that sell oriental foods, including spices.
This spice, being very bitter, and sandy if chewed, is not often used in the kitchen, more than anything else in the recipes we find the outer envelope in the ingredients. For this reason, before being ready for use in the kitchen, the berries must be dehydrated, dried and also passed through a sieve so that the black seed leaves the capsule empty and it is available for our recipes.
To prepare it, we recommend not to use the pepper mill but a mortar.
We can use it for dishes based on fish, duck, chicken and fried eggplants. In some cases, then, it is found in the form of oil and associated with other flavors such as ginger, brown sugar and rice vinegar in the recipe of fried tagliolini, for example.
In addition to Chinese dishes, Sichuan pepper is also used in Tibetan and Bhutanese cuisine, together with garlic or onion, to give flavor to pork dishes. Even in Japan this fake pepper gets to flavor some dishes, but chicken, or soups.