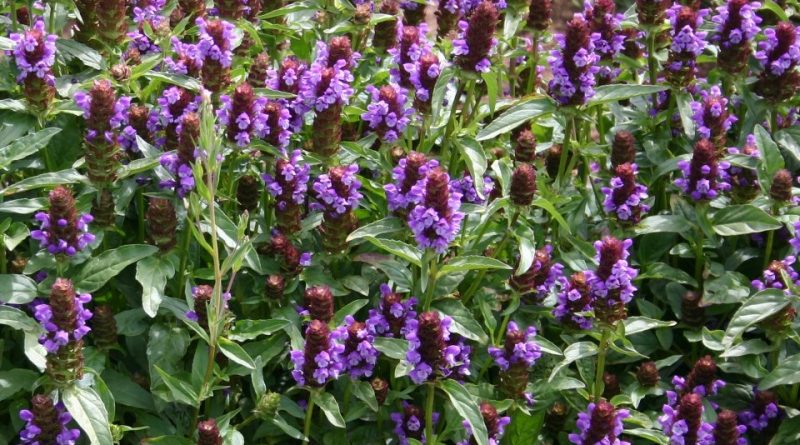 Etymology –
The term Prunella comes from prunella or brunella, the Italian name of these plants, probably attributed to the color of the bracts of the inflorescence.
The specific epithet vulgaris comes from vúlgus volgo: very common, ordinary due to its large diffusion, banal.

Geographical Distribution and Habitat –
Prunella is a plant found in cold and temperate-cold areas of Europe, Asia and North America, as well as being widely naturalized all over the world.
This plant is also present in boreal Africa and Australia.
In Italy it is common throughout the territory. In the Alps it is present on both sides. On the other European reliefs connected to the Alps it is found in the Black Forest, Vosges, Jura Massif, Central Massif, Pyrenees, Balkan Mountains and Carpathians.
It is present everywhere in the rest of Europe and in particular it is also found in Transcaucasia, Anatolia, Mediterranean Asia and the Maghreb.
Its preferred habitat is that of meadows, pastures, grassy places, up to the edge of the bushes, where it grows on preferably calcareous substrate but also siliceous with neutral pH, medium nutritional values ​​of the soil which must be on average humid, attending the vegetative plans: hilly , mountain and subalpine, from sea level up to 2000 m. sl.m .. 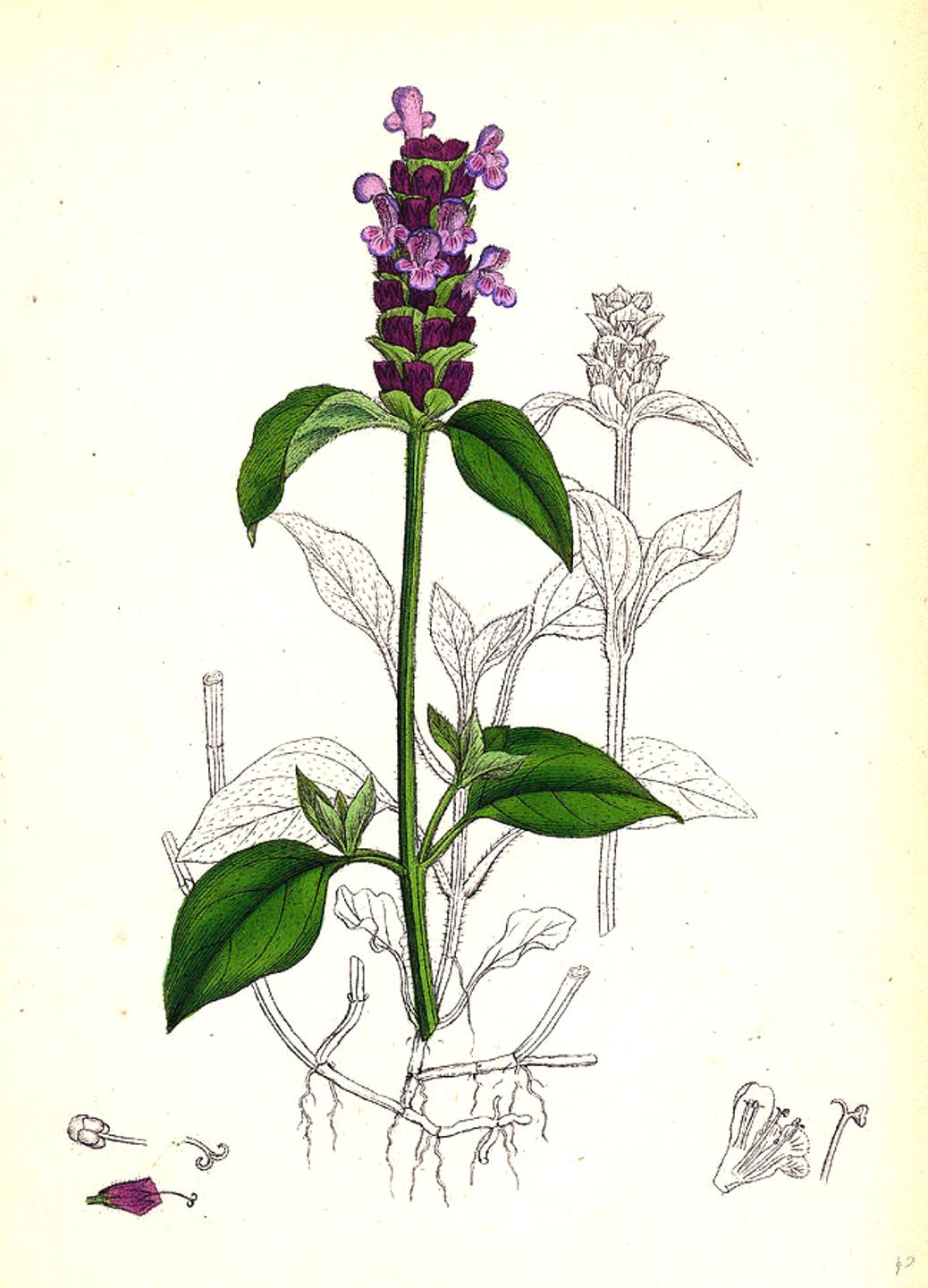 Description –
Prunella vulgaris is a biennial or perennial 4-35 cm tall plant, little pubescent, equipped with a creeping rhizome.
The stems are often squared, with villosity on the edges, erect-ascending, little branched and sometimes rooted if in contact with the ground.
The leaves are ovate-elliptical in shape, with a full or coarsely crenated margin, up to 50 mm long and up to 25 mm wide, with basal laminae arranged in a rosette, wedged, equipped with a petiole about 10 mm long; cauline laminae arranged in pairs, opposite with short petiole, 5 mm long and sometimes almost sessile; at the apex of each stem there is a single inflorescence about 3-5 cm long, which overlooks a pair of leaves and various heart-shaped bracts.
The flowers have a purplish-violet color but sometimes white, up to 15 mm long; the calyx has 5 long teeth, curved, shaggy and the corolla with trilobo lower lip and hood upper lip.
The antesis occurs from April to September.
The fruit is a microbasial (tetrachenium or tetranucula) with mericarp of 2.2-2.3 x 0.9-1.1 mm, ellipsoids, light brown in color with darker longitudinal nerves and prominent whitish apiculture.

Cultivation –
Prunella is a spontaneous, widespread plant that is practically not cultivated. However, it grows in soils with neutral pH, both on limestone and siliceous substrates.
Pollination occurs through insects such as diptera and hymenoptera (entomogamous pollination.
The seeds, falling to the ground, after being transported for a few meters by the wind (anemocora dissemination) are subsequently dispersed mainly by ants-like insects (myrmecoria dissemination).
The seeds have an oily appendage (elaisomes, substances rich in fats, proteins and sugars) which attracts ants during their movements in search of food.
However, it can also be grown as an ornamental plant, so much so that in gardens it can be found as a border plant and as a ground cover. Ultimately today this is the most frequent use for this species.
In any case, for food or pharmaceutical uses the edible parts are gathered between June and October; they are dried in an airy place and then kept in paper cans or bags.

Uses and Traditions –
Prunella vulgaris is a plant with great diffusion, with many species and hybrids can easily be formed from this plant when different species grow together (by some authors these hybrids are considered varieties).
A similar species is the Prunella grandiflora (L.) Scholler, known as Brunella maggiore, which differs in the larger corolla (2 – 3 cm) and in the fact that it does not have the two reniform bracts at the base of the spicastro (spike florale ); it is also free of stolons.
This plant contains some substances of interesting pharmacological and food use and in folk medicine, it is also called false basil.
There are: tannin, resinous compounds, bitter substances, rosmarinic acid, oleanolic acid, betulinic acid, various polysaccharides.
The healing properties of this plant are of the type: antibacterial, astringent, diuretic, stomachic, antispasmodic and tonic.
Prunella vulgaris uses all parts of the plant, excluding the root, which are harvested in early summer.
It is used in folk medicine as a mouthwash, as a vulnerary, to treat high blood pressure, headaches and conjunctivitis. For external use it can serve as a wound healing for not deep wounds. It should be noted, however, that this healing property derives from the fact that the corolla, seen from the side, looks like a sharp sickle, and in accordance with the well-known “doctrine of signatures” it was believed (around 1600-1700) that these plants had the power to heal wounds of similarly shaped weapons.
In the industrial field, dyes can be obtained from this plant.
Finally, it has an important ecological role also because it is a honey plant and therefore sought after by bees for its nectar.

Method of Preparation –
In the kitchen, Prunella is used to flavor grappa (a bitter but pleasant taste), while young leaves can be used as a salad.
For curative use, infusions can be prepared.
The infusion is obtained by using 40 grams of the plant and 1 liter of water.
It is prepared by placing the dried leaves in a bowl and adding the boiling water and then leaving to infuse for 10 minutes.
After which the ax is cooled and the liquid is used to gargle against the inflammations of the mouth (mouth ulcer, stomatitis) and throat (laryngitis and pharyngitis), to sterilize and cleanse small wounds or cuts, to perform vaginal lavage.
In the recommended doses it has no side effects.