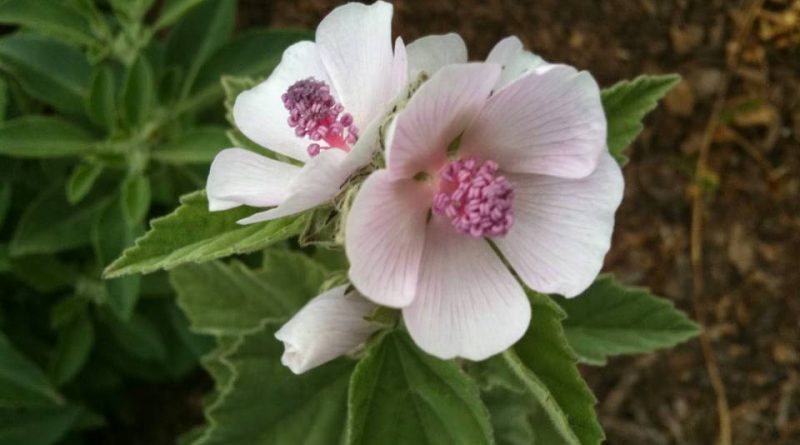 The common altea (Althaea officinalis L., 1753) is a herbaceous species belonging to the Malvaceae family.

Systematic –
From a systematic point of view it belongs to the Eukaryota Domain, Kingdom Plantae, Magnoliophyta Division, Magnoliopsida Class, Subclass Dilleniidae, Malvales Order, Malvaceae Family, Subfamily Malvoideae and therefore to the Genus Althaea and to the Species A. officinalis.

Etymology –
The term Althaea comes from the Greek ἀλθαία àlthaía, name used by Theophrastus and derived from αλθαινω altháino I doctor, risano, for the medicinal properties of some species; this genus is already mentioned in Pliny: altea, bismalva. The specific epithet officinalis derives from offícina, medieval laboratory: usable in pharmaceuticals, herbal medicine, liquor, perfumery and the like.

Geographic Distribution and Habitat –
The common altea is a plant widespread in most of Europe where it grows in humid places, along the ditches, canals, banks, around the country houses. It also lives in the presence of brackish water, from 0 to 1200 m s.l.m .. 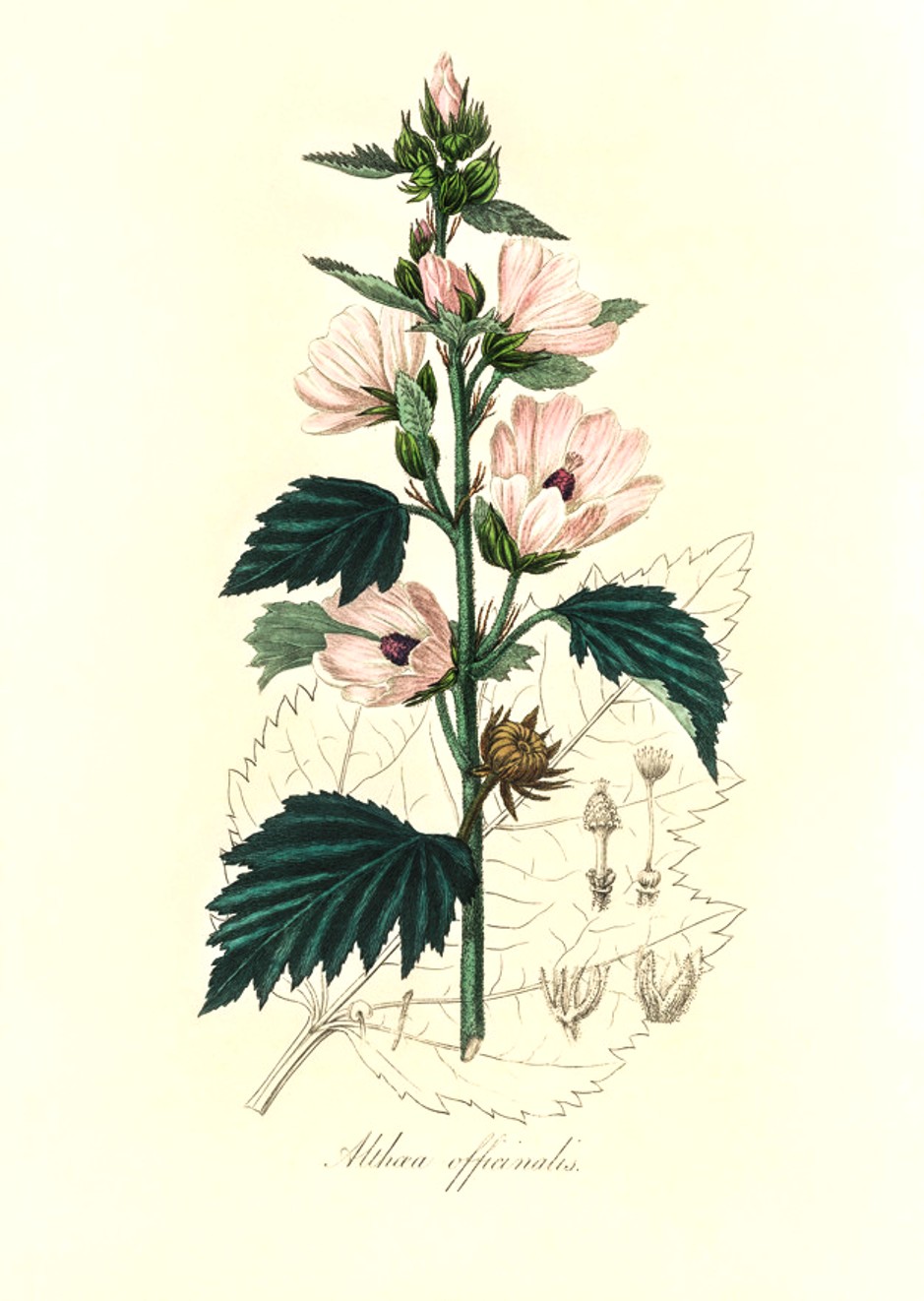 Description –
Althaea officinalis is a perennial herbaceous plant with a cylindrical fusiform fleshy root, whitish inside and yellowish outside; the stems are tomentose, erect and numerous, simple or slightly branched, up to 1.5 m tall. The leaves have a short petiole with stipules, they are alternate, palminervie, they have an oval lobed lobe and a crenate margin, tomentosa on both faces and are whole or tri-pentalobate: the central lobe is greater. The flowers are 3-5 cm, carried by axillary peduncles or terminals, with a calyx to 5 ÷ 8 bracts welded at the base, chalice with 5 divisions, corolla with prefixed conception with 5 rose petals, which alternate with the divisions of the glass. The Antesi is in the period between May and August.
The fruits are densely pubescent, formed by numerous achenes arranged circularly close to each other, with 10-20 cocci, reniform.

Cultivation –
Althaea officinalis is a plant that is easy to grow on condition that the soil is always kept moist and well fertilized. The fertilizer, preferably organic, should be put from May to September. The sowing must be carried out towards the end of June in seedbeds and then at the end of March, the bud is planted, in a final dwelling, taking care however that it is a sunny place but at the same time well protected from drafts. The complete flowering of the altea, you will see it in the middle of summer. The plant, however, only flourishes for two seasons and then it is advisable to renew the plant. The plant can suffer from rust and then you must alternate fertilizers with pesticides. The soil must always be watered abundantly but you must be careful not to stagnate the water. For details of the cultivation technique refer to the following sheet.

Uses and Traditions –
Althaea officinalis, along with other Malvaceae, was used in antiquity as food. The Althea was considered a delicious food for the Romans, while it was used in times of famine by the Greeks, Turks and Syrians.
The healing properties of the Althea officinalis were already known in the ninth century BC, Greek medicine was widely used. The active ingredients were obtained from the roots that, in the past, were pulverized and used in the preparation of soft candies called “pâté de guimauve” and indicated in the inflammations of the cord and in case of cough.
This plant is mentioned in one of the Capitulars of Charlemagne and was widely cultivated throughout the Middle Ages. In those times the soothing and emollient qualities were used to treat swollen and infected sores, for this purpose it was cultivated in the gardens of the monasteries.
Prospero Alpino (1553 ÷ 1616) medical-botanist, who spent a long time in Cairo and wrote the “De medicina Aegyptiorum” (1591) and the “De plantis Aegypti” (1592) informs us that even the Egyptians used this plant for the purpose food. Quotes we find in Horace, Martial, Virgil, Dioscorides, Pliny, which enhance their medicinal properties.
Althaea officinalis is a medicinal herb and officinal herb; it is a sweetish, mucilaginous herb with an emollient, decongestant, expectorant and antiseptic action. The mucilage of this plant has shown strong hypoglycemic activity, so in subjects receiving insulin or oral hypoglycemic agents it can further reduce blood glucose levels. It has been used, from traditional medicine, for the treatment of inflammation of the oral cavity and pharyngeal cavity, of the digestive tract, of the urinary tract, in case of peptic ulcer, wounds, burns, boils, abscesses, inflammation of the eye, as a liniment for chapped hands, chilblains and insect bites.
In times past the decorticated root of this plant was given to children to chew to encourage teething.
The common Altea is used in modest quantities in alcoholic and non-alcoholic beverages, in sweets, candied fruit, baked goods, jellies, extracts of the roots are used in sweets, also from the root was extracted the juice that was the main ingredient of marshmallows .
It is also used as an ornamental plant in gardens and vegetable gardens and is also a good melliferous plant.

Preparation Mode –
The common Altea, as mentioned, can be used in small quantities for the preparation of alcoholic and non-alcoholic beverages; it can also be used in desserts, candied fruit, baked goods, jellies; In the confectionery field, in fact, the extracts of the roots are used as flavoring in the preparation of sweets.
For the phytotherapeutic use the parts of the plant that are used are the root and leaves (the latter more rarely). The roots are harvested during the autumn period and are then dried in the sun or in an almost cold oven, while the leaves are harvested during the flowering period (towards the end of April). The common altea is also used in the cosmetic field for preparations to moisturize the skin and combat couperose.
The common altea is used in the form of infusions, decoctions, macerates and poultice and its main uses are diuretic, anti-inflammatory and cicatrizant. The roots are used to prepare remedies for gastrointestinal disorders (gastritis, colitis, etc.); the leaves are more often used in the treatment of disorders of the pulmonary and urinary systems (bronchitis, pharyngitis, catarrhal states, cough, cystitis, urethritis, renella, etc.).
The intake of common altea at high doses or in any case for long periods of time is not without side effects (nausea, vomiting and disorders at the gastrointestinal level).
Furthermore, as mentioned, intake is contraindicated in subjects with diabetes and treated with insulin and hypoglycaemic drugs because the herbal remedy could enhance its effects. It is also advised against the use of altea common to pregnant or nursing women.