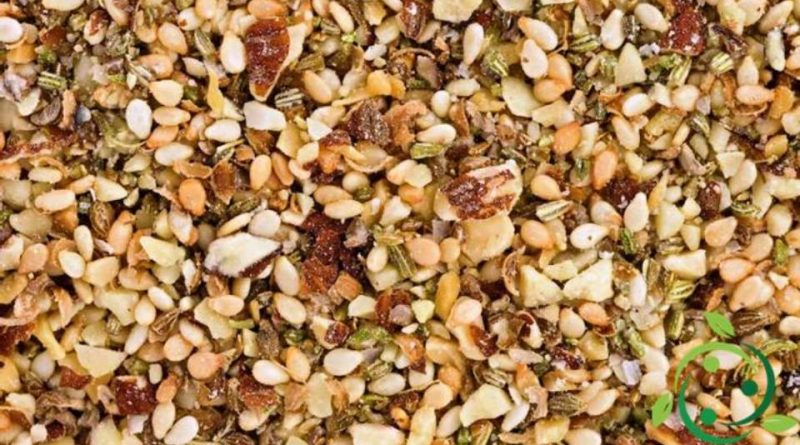 Dukkah is a dry blend of spices, dried Ethiopian dried herbs and fruits, however spread throughout North East Africa.

Origins and History –
The word dukkah, or also dukka or duqqa, in Egyptian means to break or to step on.
Dukkah is a dry blend that came out of the borders of Egypt, quite common in the Middle East and has also become famous in other countries such as Australia and New Zealand. Its characteristic is that it contains a lot of dried fruit, such as walnuts, peanuts, pistachios, almonds and walnuts.
This mixture, in Egypt, was traditionally used by poor people in humble pitas, bread soaked in oil, to give some substance and protein to their diet. In fact, in the tradition it was used to taste it by dipping Arab bread first in extra virgin olive oil and then in the mixture.
Today dukkah is also put on salads, simple cooked vegetables, in pasta, meat or fish, creams or yogurt to exponentially improve its flavor.

Description –
The dukkah is a mixture with a mixed powdery consistency and small coarser fragments, also linked to the level of shredding and of a light brown – reddish color.
The composition of this mixture is somewhat variable but normally revolves around the following basic components:
– hazelnuts or chickpeas or other dried fruit;
– sesame;
– pepper;
– coriander;
– cumin;
– salt.
However, other ingredients may be present such as dried oregano, sweet paprika and others.

Active principles –
As is evident, the percentage of the various components of Dukkah depends a lot on the starting raw materials, so there is no standard data sheet of the nutritional values ​​and substances present in this spice.
This is due not so much to the variability of the components, which in dukkah are used in somewhat standard percentages, but for the variety of the ingredients and also for the difference in characteristics, often of the spices that make it up as they also come from somewhat different cultivation systems .
Obviously for the composition of the individual spices or components, refer to the data sheet.

Properties and Uses –
Dukkah is a mixture that is usually used to dip the pieces of Arab bread already wet in oil that are eaten as a snack or aperitif. Instead of bread, pieces of watermelon can be dipped in summer.
Like other spice blends, it was born out of the need to increase both the flavor and the nutritional value of food, often of the poorest sections of the population.
Today, however, it is used in salads or on vegetables and is often used to bread pieces of lamb or chicken, prawns and fish in order to form a crunchy and tasty crust.
The presence of hazelnuts or chickpeas or other dried fruit, sesame, pepper, coriander, cumin or other components gives particular therapeutic properties to be evaluated, from time to time, according to the real composition of the Dukkah mixture.

Preparations –
For the preparation of the dukkah we can say that it is quite easy since its ingredients are found in any supermarket; it is also fast enough to prepare as it takes about 3 minutes and, moreover, it can be used in many dishes.
One of the typical preparations is presented here for the preparation of this spice mixture.
In this case the ingredients are:
– 500 g of sesame seeds;
– 250 g of coriander seeds;
– 120 g of minced cumin;
– 125 g of walnuts (or other dried fruit);
– Salt and pepper.
Remember, however, that innumerable variations can be added to this basic recipe, to one’s own taste.
For the preparation, proceed as follows:
– put the seeds and dried fruit in two separate containers and heat them for 5-10 minutes in the oven at 250 ° until they color and release the spicy aroma. Put them in a robot with salt and pepper and operate until they are chopped but not pulverized. Do not mince them too much otherwise the dried fruit releases the oil and turns everything into a paste. In some versions are added: paprika, fennel seeds, pepper.
If you don’t have walnuts or hazelnuts or peanuts, you can replace them with cashews, almonds, pine nuts or pistachios. Sunflower, pumpkin or fennel seeds are welcome. Even spices allow for all the variations you want; nothing prevents you from adding black pepper, spicy paprika, turmeric or coriander.
As far as conservation is concerned, it is evident that, not having a wet ingredient in which unwanted bacteria can develop, the dukkah mixture resists up to 1 month in a tightly closed container.
Besides, it is advisable not to go because the dried fruit can become rancid, while the spices and herbs lose their aroma.
The mixture thus obtained can be used to bread pork and fish before cooking on the grill to obtain a crunchy and tasty crust. It can be added to marinades with yogurt for meat. It can be put on boiled potatoes or spread on salads together with a pinch of sumac.
If you want to stay on the more national flavors, you can grill the vegetables you have at home, adding a little oil, vinegar, salt and, above, a generous amount of dukkah.
The dukkah can also be inserted on any vegetable cream, for example pumpkin, asparagus, peas or artichokes; as well as in tomato paste where it improves the taste.