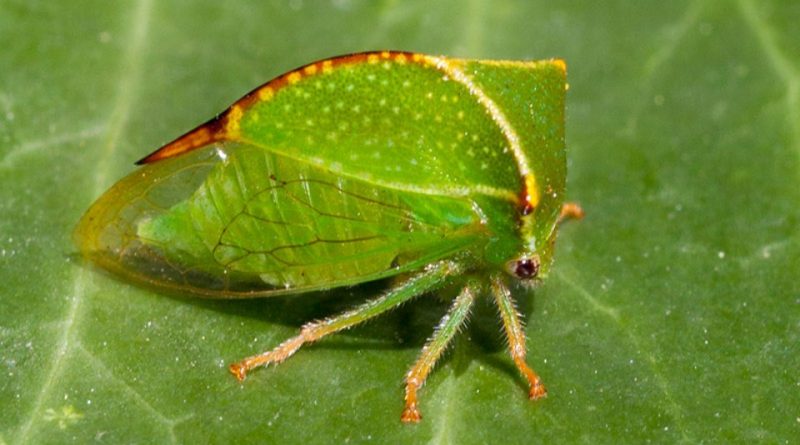 Systematic –
From a systematic point of view, it belongs to the Eukaryota Domain, Animalia Kingdom, Sub-Kingdom Eumetazoa, Phylum Arthropoda, Subphylum Tracheata, Superclass Hexapoda, Insecta Class, Subclass Pterygota, Superorder Paraneoptera, Order Rhynchota, Suborder Homoptera, Infraorder Cicadomorpamidae, Membramacha family, Membracinae and therefore to the genus Stictocephala and to the species S. bisonia.
The term is synonymous:
– Cicadella buffalo.
Its common name derives from the singular shape of the body and thorax of the adults, whose pronotum is detected and triangular in shape with the basal part expanded towards the head (the two apices seem horns) so as to make it resemble a buffalo.

Geographical Distribution and Habitat –
The Buffalo treehopper is an insect with origins in areas of North America but now present throughout southern Europe.
In Italy this insect is widespread especially in the northern regions and lives at the expense of plants such as vines, apple trees, pear trees and other fruit trees.

Morphology –
The Stictocephala bisonia, at the adult stage, measures 8-10 mm in length and recognizable by its green – ocher color.
On the pronotum there are two pointed processes on the sides and a pointed central faired prominence facing backwards.
At the nymph stage, the insect is similar to the adult, with a green color but without wings.

Aptitude and biological cycle –
The Buffalo treehopper winters in the egg stage, within the cortical tissues of small vine branches and other arboreal and shrubby plants (fruit bearing, hawthorn, willow, poplar, ash, walnut); arrived in the period of April-May the neanids drop to the ground and migrate towards the leaves of spontaneous plants (in particular fabaceous plants such as medical and clover) where they feed by sucking the sap and where they perform many moulting. These reach maturity in about 6-8 weeks, which corresponds roughly to July.
During the period of July, the adults go to the vine and the fruit trees where they exercise the trophic activity on the branches, on the petiole of the leaves and on the spine of the bunch and on which mating takes place and subsequent oviposition. To attract females, males produce ultrasound and therefore not perceptible to humans.
The spawning occurs in late summer, a period in which the females make incisions on the bark of the vine or other host plants, by means of the robust ovipositor, where they lay 6-12 eggs. On average, each female can lay 100 to 200 eggs. The incisions can be recognized as they are 3-4 mm long and almost always arranged in pairs parallel to the axis of the twig.
In this way, the insect performs only one annual generation.
The activity of this insect, in the case of massive presence, is manifested above all on life and is determined by the nutrition bites generally made on herbaceous twigs.
The punctures, which are made around, in the shape of a ring, cause a characteristic strangulation of the shoots which, sometimes, by reaction of the tissues can lead to hypertrophic swellings.
In these cases, especially in the Vine, in the distal part of the twig, there is also the chromatic alteration of the leaves, which turn yellow-reddish in color, and crumpling of the same margins downwards.
Annular constrictions can occasionally also appear on the bunches, with the part below the constrictions that do not mature and remain green.
Further damage may be due to oviposition due to the robust insect ovipositor. In fact, inside the cortical layer of the twigs, small cancers or deformations are generated that hinder the normal performance of the physiological functions.
To these manifestations can be added the effects of other fungal pathogens that are inserted in these wounds.
The damage can obviously be more relevant in the young seedlings of the nurseries, due to the deformations and the decomposed growth.

Ecological role –
To contain the infestations of Stictocephala bisonia it is advisable to remove and burn, after pruning, the branches that show signs of oviposition.
Furthermore, oviposition can be impeded by applying greasy bands of sticky substances around the trunks; in this way it prevents the ascent of the females who are about to reproduce.
In nurseries and young plants it is appropriate to eliminate spontaneous herbs, with particular reference to legumes, while in grassed plants it is advisable to carry out periodic mowing to limit the development of the juvenile forms of the insect.
Chemical control is not recommended, either because of the known disasters on the useful entomofauna, or because it is somewhat difficult even when carrying out a large number of chemical interventions. Furthermore, on plants in production, the chemical control is rarely justified, due to the slight damage caused by the insect.
It should also be remembered that this phytophagous can be controlled by the hymenoptera Polynema striaticorne which is a parasite of its eggs. This hymenoptera can be introduced into the orchards, practicing the inoculative biological control system, that is, using the twigs with already parasitized eggs.