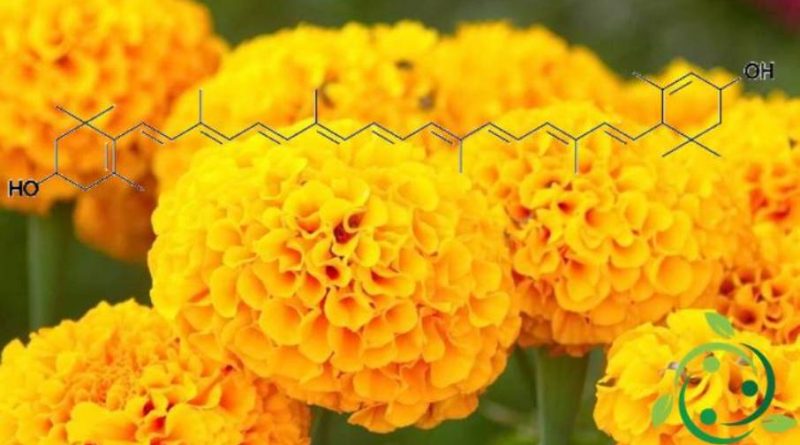 Lutein, whose term in the official IUPAC nomenclature is: β, ε-carotene-3,3′-diol and whose brute or molecular formula is: C40H56O2.
Lutein, known as E161b, is a xanthophyll in the European code for food additives.
Lutein is a substance of natural origin, known for its antioxidant and eye protection properties and is present in brightly colored foods such as fruits and vegetables, particularly in green leafy vegetables and orange and yellow foods.
From the commercial point of view the main source of lutein is made up of Tagetes erecta flowers. Lutein, in the form of palmitic diester (Helenen or Helenium), is contained in the petals of these flowers, which are widely cultivated for this purpose in Latin America, and from which it is extracted with solvent. An extract is thus obtained at a concentration of 5-15% which can be used as it is or subjected to saponification to obtain lutein in the form of free alcohol.
Lutein is widely used in the food industry (as a natural dye) and in the zootechnical industry, where it is added to feeds intended for feeding the hens to accentuate the color of the egg yolk.
As with other animals, humans cannot synthesize lutein and must therefore obtain them through food.
Once taken through the diet, this substance is concentrated in the macula, ie in the central area of ​​the retina of the eye, where it absorbs natural blue light, protecting it from harmful UV rays.

It is therefore no coincidence that in some studies lutein has been shown to be effective in preventing age-related macular degeneration, which recognizes one of its main risk factors (along with cigarette smoking, factors) in excessive exposure to the glare of the sun. genetic and nutritional imbalances). This disease is characterized by a degenerative process affecting the retina. In subjects older than 55-65 years living in industrialized countries, age-related macular degeneration is the main cause of progressive and irreversible loss of visual function.
In smaller quantities, lutein is also present in the crystalline lens and in this regard it is attributed the ability to counteract cataracts (a disease caused precisely by the clouding of the lens of the eye).
In humans, the daily requirement of lutein is estimated at 4-6 mg (to satisfy it, for example, 50g of spinach per day).
The use of lutein, according to the appropriate indications, has generally proved to be safe and well tolerated. The side effects described were very rare and clinically insignificant.
Among the contraindications the use of lutein is contraindicated in case of hypersensitivity to the active ingredient.
Furthermore, intestinal absorption of lutein could be compromised by the simultaneous intake of active ingredients and foods such as cholestyramine, colestipol, mineral oils, orlistat, beta-carotene and pectin.
On the contrary, the simultaneous use of medium chain triglycerides or some vegetable oils, such as corn, would seem to increase the intestinal absorption of lutein.