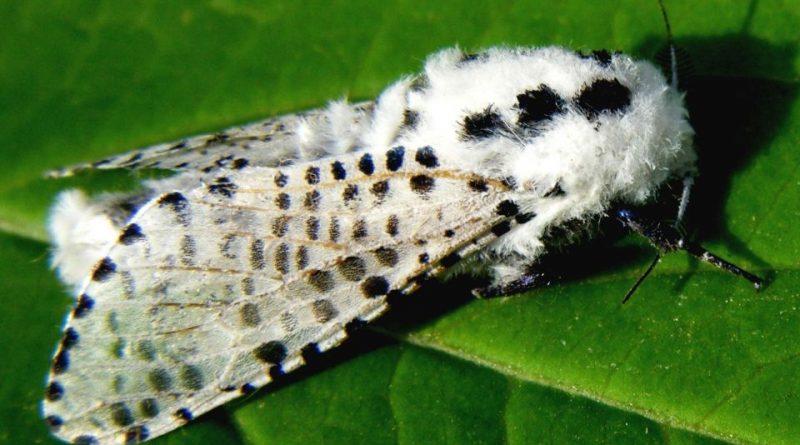 Geographical Distribution and Habitat –
The Leopard Moth is an insect with a wide Palearctic spread: it is present in Europe, in North Africa and in northern Asia and was introduced, accidentally in North America and South Africa.
The larva of this insect is xylophagous and feeds on numerous plant species, including some fruit trees such as: plum, apricot, almond, peach, cherry, apple, pear and olive. 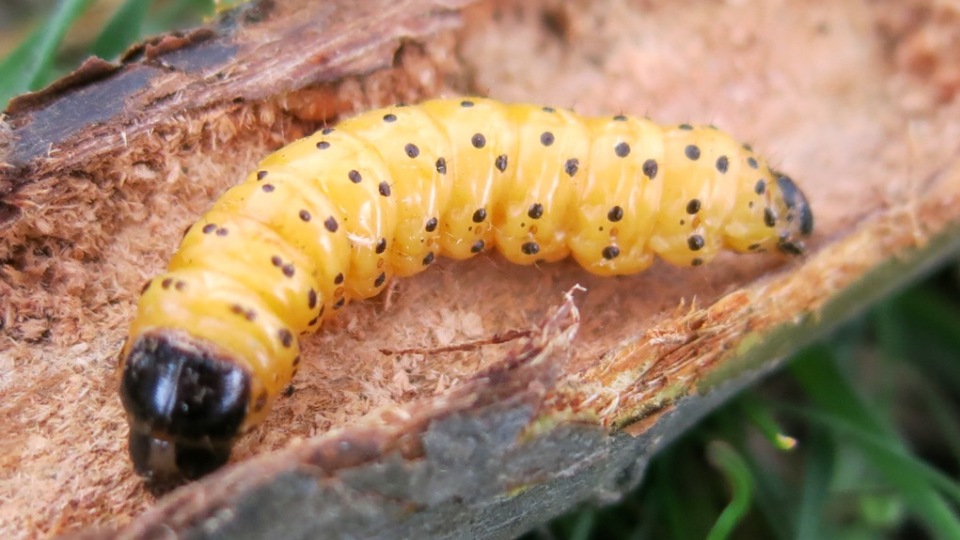 Morphology –
The Zeuzera pyrina is recognized for having, as an adult, a wingspan that fluctuates around 70 mm and even more.
The wings are whitish in color with black spots and bluish reflections; the chest, which is also white in color, is covered by a velvety down and on which we see six black spots arranged in two rows.
The abdomen is dark and elongated.
This insect has a certain sexual dimorphism which, in addition to its size, is distinguished by the shape of the antennae, which are thinner in the female. The male’s antennas are larger with the exception of terminal articles.
The eggs can be recognized because they are laid in groups of several hundred and measure around 1 x 1.3 mm, and are initially light yellow in color and then turn towards pink as the embryonic development progresses.
Newly hatched larvae have a pink color; after which the abdomen and chest become cream-yellow in color, with numerous black dots on the back, while the head becomes shiny black; when they reach maturity they measure 50 – 60 mm in length.
The nymphs measure about 40 mm in length and have a brownish-yellow color.

Attitude and biological cycle –
The Zeuzera pyrina begins its biological cycle after wintering as a larva both in the first and in the possible second winter, inside the excavated tunnels. The flicker interval is wide.
In fact, adults fly in the period from late May to September, with maximum attendance between June and July.
The oviposition is carried out by the females or in old tunnels or in crevices of the bark or, still in lesions of different nature. Each female can lay an average of 5-700 eggs, but it has been ascertained that, in exceptional cases, a female can even lay over 2000 eggs.
Once born the larvae penetrate into the shoots that characteristically wither or in the young twigs, where they dig tunnels in the medullar area. The attack consists of a small hole 2 or 3 mm in diameter through which the larva enters the trunk. Afterwards, it gnaws the wood underneath the cortex creating a chamber about 30 mm in diameter and 5 mm deep.
Once this chamber is created, the larva digs an ascending tunnel in the trunk of a diameter of 5–7 mm. At the bottom of the gallery the larva turns into pupa. After the incubation period, which can last from 2 weeks to more than a month depending on the climates, the pupa moves up to the entrance of the tunnel, breaks the now dried bark, leaves the shell stuck and flies away.
In this period the larvae emerge from these tunnels several times, attacking woody organs of greater diameter.
It is possible to monitor the activity of the larvae through the clearly visible exit holes and the rosure that come out of these that collect at the foot of the plant or at the edges of the holes.
This first generation of winter larvae and in the following summer can:
– flicker, developing a generation a year;
– remain at the larval stage also the 2nd year; in this case they pass the second winter as larvae and flicker in the summer of the 3rd year, making a generation in two years.
For this reason the cycle of Zeuzera pyrina comes to differentiate according to the climatic characteristics of the regions where it lives. In continental Europe the cycle is biennial, with wintering at the protected larva stage inside the galleries. In the Mediterranean regions, two cycles overlap, one annual and one biennial. Because of this complexity, flickering lasts for a fairly long period. The beginning of the flights takes place in May, by the wintering generation, while the adults of the annual generations flicker in late summer until September-October.
The Zeuzera pyrina is a rodilegno which, unlike the Cossus cossus, is distinguished by the type of damage and the organs affected; in fact it hits the cimali, digging tunnels in the center of the shoots.
The damage, as described, is due to the trophic activity of the larvae that dig tunnels on the tops; they attack the shoots and branches, especially the younger ones, and then move, in the more advanced larval stages, also on the older branches of greater diameter, on the large branches and on the stem.
The damage is manifested by the drying up of the affected shoots, loss of mechanical resistance of the affected woody organs (twigs, small branches and young stems) which can break due to the action of meteoric agents or vegetation loads.
Furthermore, a general deterioration of the affected organs and plants can occur, especially if they are young plants; finally, it is recalled that the fungi causing caries and cancers are inserted in the wounds caused in the plants.

Ecological Role –
Leopard Moth is a phytophagous and polyphagous species that lives at the expense of various plants such as: Pomacee, Drupacee, Olive, Fruit Trees in general, Forest and ornamental Hardwood.
The larvae that, as mentioned, overwinter inside tunnels dug in the medullary area of ​​the trunk and branches, preferring trees of Acer, Fagus, Alnus, Ulmus, Tilia, Salix, Corylus, Fraxinus, Crataegus, Platanus, Quercus.
The damage is particularly relevant in the fruit sector of the genera Malus and Prunus and, in southern Italy, on the olive tree.
The containment of Zeuzera pyrina, especially in recent years, has undergone considerable changes also in relation to the renewed knowledge on the principles of agroecology and parasitic biocoenoses.
We have thus passed from the chemical fight, which is carried out in spring, to the appearance of the first damage on the shoots and until the larvae remain on the herbaceous twigs, with treatments with endotherapic insecticides such as Azinfos-methyl, Phosphamidone, also active chitin-inhibitors Teflubenzuron and Triflumuron applied approximately 3 weeks after the start of the flights, to the guided and biological fight.
The fight against this insect is carried out starting from monitoring with sexual traps, in order to know the real consistency of the flights and the period of the flicker peaks, to carry out ovicidal treatments or against the young larvae: the treatment is generally carried out after about 3 weeks from the start of flights and repeated if necessary after 15-20 days.
For details of the biological fight against Zeuzera pyrina, see the following page.