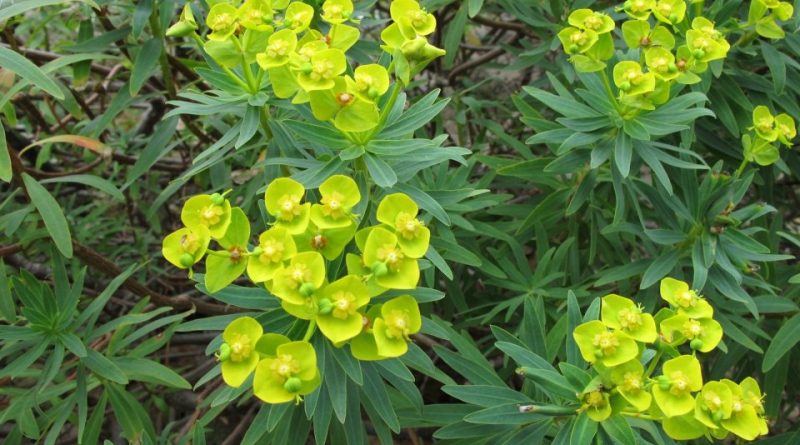 The Euphorbia arborea (Euphorbia dendroides L., 1753) is a shrub species belonging to the Euphorbiaceae family.

Etymology –
The term Euphorbia comes from “Εὔφορβος Euphorbos” Euphorbus, Greek physician of Juba II king of Numidia, who – according to Pliny – discovered the medicinal virtues of this plant; the name Euforbo derives from ἐῧ éu bene and from φέρβω phérbo to nourish or from φορβή phorbé nourishment: well fed. According to the Treccani from the classical Latin euphorbium / euphorbia.
The specific epithet dendroides comes from the Greek δένδρον déndron tree and from the Greek εἷδος eídos semblance: of arboreal aspect.

Geographical Distribution and Habitat –
The Euphorbia arborea is a plant widespread in the Mediterranean basin to the west up to the coasts of Mediterranean Spain and to the east up to the Aegean; it is also present in North Africa in Algeria and Libya, in Palestine and in the Canary Islands. This species became naturalized in Western Australia and southern California.
In Italy it is present on the Tyrrhenian, Ionian and low-Adriatic coasts (Liguria, Tuscany, Sardinia, Lazio, Campania, Puglia, Basilicata, Calabria, Sicily).
The Euforbia arborea is a thermophilic essence of tropical origin, it lives in arid and above all calcareous environments. It thrives in arid and especially calcareous coastal environments, on cliffs and cliffs near the sea, from 0 to 700 m. 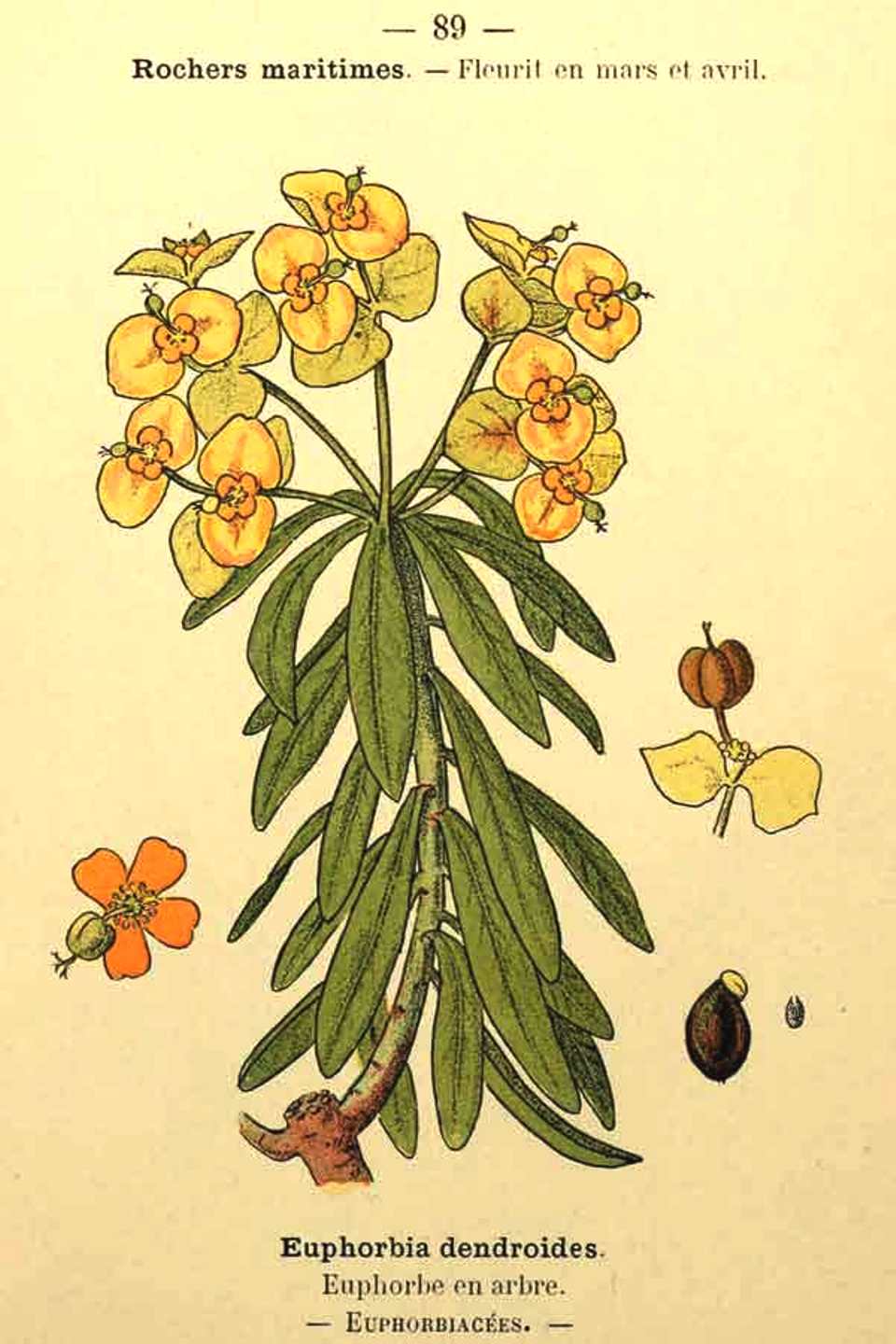 Description –
Euphorbia dendroides is recognized for its shrubby aspect that develops between 0.4 and 1.8 meters. It carries many rigid branches of reddish color without leaves in the basal part; the branches, if torn, secrete a white latex that is irritating to contact with the skin.
In winter and spring, it forms real spherical green cushions. In summer it is presented in the form of shrubs without leaves and skeletal appearance.
The leaves are alternate lanceolate in color from glaucous green to reddish, up to 7 cm long; they are placed in the upper part of the branches where they remain from the first autumn rains until the beginning of the summer, a period in which they turn red before falling.
The inflorescences are umbrella-shaped with bracts (small leaflets at the base of the flowers) of rhomboid shape, composed of yellow-gold flowers.
The anthesis is in the period between February and March.
The fruits are smooth capsules (tricarpellar coccaria) of 5-6 mm that contain flattened seeds, gray, smooth, 3 mm long. They mature between May and June.

Cultivation –
As for the cultivation technique, we remind you that this plant can be propagated both by seed and by cuttings.
For the propagation by cuttings it is necessary to wait for the end of flowering, while for that through seed during the autumn season. In nature, the dissemination is guaranteed by a mechanism for opening the fruit which projects the seeds at a certain distance from the mother plant.
The planting of the seedlings should be done in autumn, so that during the winter the roots will have time to grow. Before using cuttings, remember to use gloves to avoid coming into contact with the irritating latex.
For the planting, it is necessary to prepare holes that are slightly larger than the earthenware. The distance of half the final width must be left between one plant and another.
If you choose to proceed with the cultivation in pots, you need to prepare a layer of gravel to be placed on the bottom. This way you will have the right drainage to the plant. the substratum, in this case, should be prepared by mixing universal soil with sand.
For pruning, remember that it is not necessary to proceed with this technique except to shorten branches to prevent the plant from spreading too far. This operation is recommended during the autumn period.

Uses and Traditions –
Euphorbia dendroides is a characteristic species of the Mediterranean scrubland and coastal garrigue, which under these conditions undergoes the phenomenon of estivation, ie it has the vital phase (production of flower and fruit leaves) in winter until spring. When the vital conditions become critical for the heat and the arid in summer, there is a phase of complete stasis of the vegetation, including the fall of the leaves.
This plant generally reproduces by anemogam pollination, but there are also documented cases of zoogama pollination by insects, as well as by saurians, such as the Balearic lizard Podarcis lilfordi, which visits Euphorbia dendroides to feed on its highly concentrated nectar.
Euphorbia dendroides is a “tertiary wreck” which probably, in a tropical climate, was widespread in a much larger area than it occupies today, and which disappeared from many areas with the glaciations of the Quaternary or Neozoic Era .
It is the only species of the genus Euphorbia with a shrubby habit present in the Mediterranean basin, therefore easily distinguishable from other congeners. Since there are 9 other species of Euphorbia that have this same bearing and are all endemic to the Macaronesia Islands; this would suggest that E. dendroides also originated in these archipelagos.
Regarding its preservation, there are no protective notes, on the contrary it is sometimes considered a pest, but it is nevertheless included in several biodiversity conservation sites.
As for its active ingredients and its properties, in the seeds of this plant we find tocopherol, fatty acids (in particular linoleic acid), sterols. Also present are saponins, euphorbone, vegetable wax (candelilla wax), di- and tri-terpenes, resins.
No cosmetic uses are known for this species, which contains an irritating latex. On the mucous membranes, especially those of the eyes, tiny drops can cause painful and persistent irritations; sometimes irritation can occur due to simple nebulization in the air of the latex itself, for example, when cutting the plant.
The species is however the subject of research for the antioxidant activity of tocopherol, present in it.
The latice secreted by the plant is so stinging that it can be used, like the latex of Ficus carica, to burn the leeks and the warts.
The seeds and dust of the roots have purgative and emetic-cathartic properties. For external use they are rubefacient (they cause redness of the skin), revulsive and stinging, properties that were once used to treat rheumatic pains.
In the folk medicine of the distant past it seems that the very diluted latex was used internally as an energetic purgative and, at even greater dilutions, as an emetic.
Due to the characteristics and properties of latex, Euphorbia dendroides is counted among the fish-toxic plants.
At one time this species was used for freshwater fishing.
It was also used for the purification of tanks and water troughs from leeches and infesting aquatic insects. After the treatment, for a certain period, the water could not be used to water the animals, since they refused it.
It is known that certain oriental peoples used it against the bite of snakes.
From many African populations, the latex was considered a kind of truth serum: inoculated in the pupils of the alleged offenders, if these were also temporarily blinded, as happened punctually, the unfortunates were considered responsible for the crimes attributed to them.
Finally a note of ecology of this plant. In case of fires the aerial part of the plants is completely destroyed, due to the high combustibility of the wood. After the passage of the fire, however, Euphorbia dendroides tends to expand considerably thanks to both the reconstitution of the foliage, preferably of young individuals, and the propagation by seed. The fire therefore seems to favor the propagation of this species, so that a long period without fires can reduce the presence in the vegetation of a territory, as the young plants have considerable survival difficulties with the progressive closure of the foliage of the surrounding vegetation.

Preparation Mode –
It has no food uses since the whole plant is toxic.