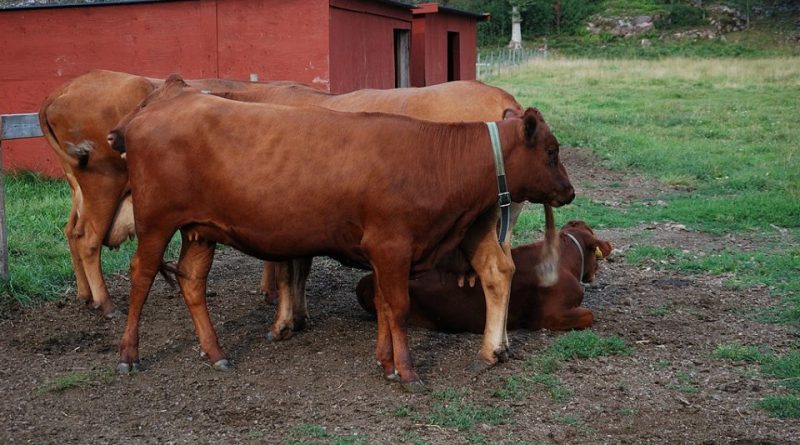 The Swedish Red Polled is a cattle breed (Bos taurus Linnaeus, 1758) originally from Sweden and related to Norwegian acorne breeds.

Geographical and area distribution –
The Swedish Red Polled is one of the few remaining Swedish breeds. It was usually bred in the Swedish province of Dalarna and along the west coast of the country. Later it spread to the areas of Bohuslän, Dalsland, Gästrikland, Hälsingland, Närke, in the islands of the Stockholm archipelago, Uppland, Värmland and Västmanland.

Origins and History –
The Swedish Red Polled is a traditional Swedish breed. In 1912 the first genealogical book was founded, which allowed the first spread of the breed.
In the late 30s of the last century it was present not only in the province of Dalarna but also in Bohuslän, Dalsland, Gästrikland, Hälsingland, Närke, in the islands around Stockholm, Uppland, Värmland and Västmanland, for a total of about 30,000 heads.Next , in 1937 a new breed, the Swedish Polled (Svensk Kullig Boskap or SKB), was created with the intention of merging the Rödkulla breed with the Fjällras, a traditional Swedish breed of mountain cattle. However, the breeders did not accept the new classification and continued to maintain separate bloodlines as before.
In the 1960s a breeding association was founded (the Sveriges Rödkulleförening), however, despite this, the population decreased dramatically. In fact at the end of the 70s it had fallen to the minimum of about 20 head of pure-bred cattle; from that moment the efforts for the conservation of this breed began.
Similar breeds from Finland and Norway (Ostlandsk Roedkolle and Vestlandsk Raudkolle) were used in the recovery process.

Morphology –
The Swedish Red Polled is a breed characterized by a full red coat that in some cases can vary between brown and ocher-colored and can sometimes have white or black marks on breasts, legs and head. They are cattle without horns and horned animals may not be registered in the herd book.
Presents a rosy musk.
The weight fluctuates, also depending on sex between 350 and 600 kg, with an average height at the withers of 120 cm.
This breed is characterized by strong legs and hooves. They are cold-resistant and can stay outdoors for most of the year, also having good general health.
They are lively animals and of good character, with the very fertile female and good mother.

Production aptitude –
The Swedish Red Polled is a breed mainly for milk production but is also used for meat production.
A cow of this breed produces an average of 5,000 liters of milk a year, about half of what a dairy cow from modern dairy breeds produces.
They are however animals that use forage well and tolerate the intense cold of the northern regions well.