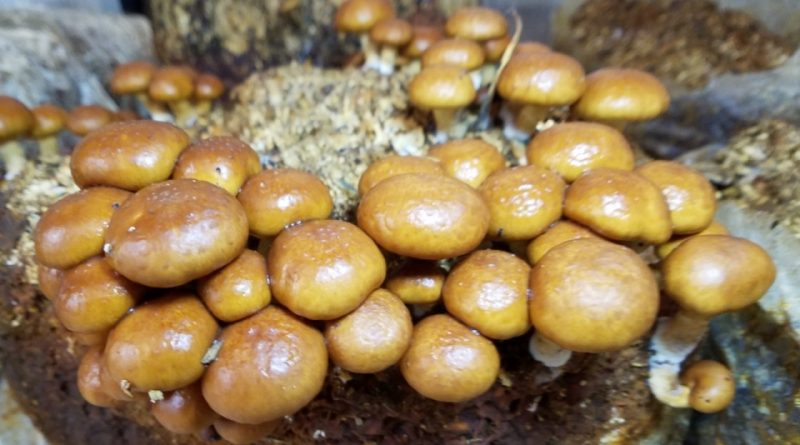 Geographical Distribution and Habitat –
The Nameko is a mushroom that is born in groups, even very numerous ones, on broadleaf stumps and is harvested in summer and autumn. Its origin is however mainly of a commercial nature being one of the most cultivated and most popular mushrooms especially in Japan.

Recognition –
The Pholiota nameko is recognized as it is a small mushroom with a cap, with a diameter between 3 and 6 cm, which is convex and cinnamon-colored, with a slightly gelatinous cuticle. The hat is hygrophanous, therefore variable in color depending on the humidity but, in any case, always smooth. The stem has the same color as the cap and is from 4 to 8 cm high, with a membranous ring precociously transient. The lamellas are more or less dark yellow-cinnamon. The flesh is whitish with a pleasant fungal aroma.

Cultivation –
Nameko is a particularly widespread and cultivated mushroom in the East and in Japan in particular. For the details of the cultivation technique, see the following sheet.

Uses and Traditions –
The nameko mushrooms, are particularly known and available in nature to clumps on trunks of various essences. The Pholiota nameko, also known as yellow family, is a mushroom considered good edible. This mushroom is particularly consumed in China and also in Russia, where it is often sold as opёnok (Russian: опёнок) or plural opjata (Russian: опята). In the United States, the fungus is sometimes called butterscotch mushroom.

Preparation Mode –
The nameko is a mushroom that is widely consumed in various recipes and preparations. It can be preserved in oil, where preservation enhances the flavor of the nameko which is very appetizing. The namekos have an aromatic smell and a sweet and pleasant taste. It is an excellent mushroom if consumed as an appetizer or as an accompaniment to main courses. It turns out to be an excellent ingredient for cooking soups and risottos. It is also used as an ingredient in misoshiru (miso soup in Japanese) and in nabemono, also called simply nabe, which is a cooking style and preparation of this unique dish of Japanese cuisine.