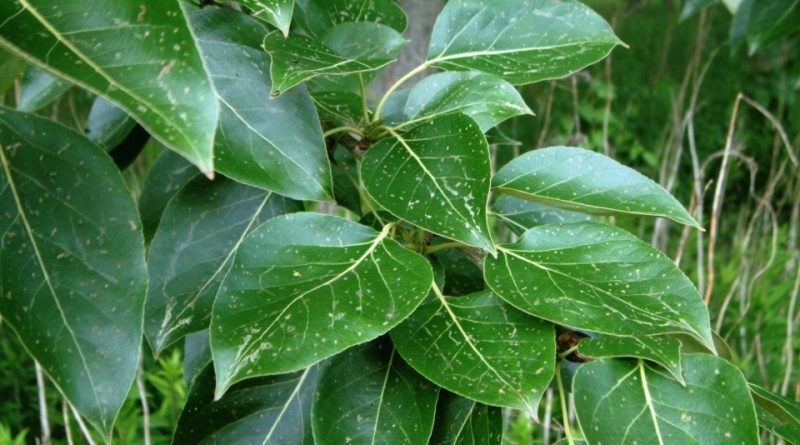 Etymology –
The term Populus comes from the Greek πάλλω pállo jump, shake, tremble: due to the behavior of the branches under the action of the wind.
The specific epithet balsami fera comes from the Greek βάλσαμον bálsamon balsamo (derived from the Hebrew basam perfume, spice, connected to the Aramaic busma and the Arabic basham) and from φέρω phéro bring: which produces aromatic resin or has balsamic qualities.

Geographic Distribution and Habitat –
The balsam poplar is widespread on a Palearctic range and is present in North America, from Newfoundland to Alaska, south of New England, Iowa and Colorado.
Its natural habitat is that of the boreal and mountain highlands and in the alluvial plains and reaches its best development in the alluvial plains in deep and sandy soils humid with river bottoms, banks of streams, edges of lakes and marshes. 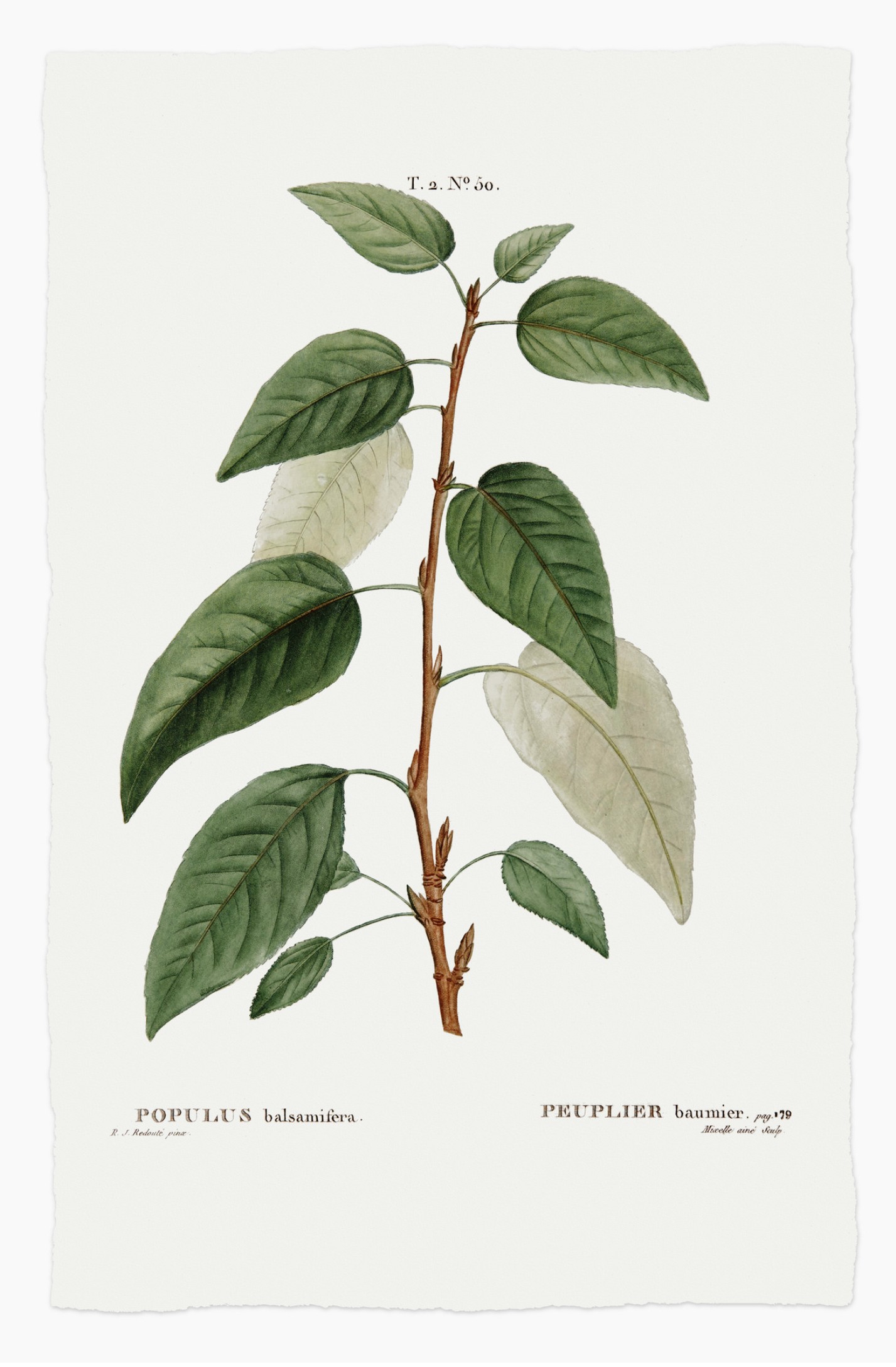 Description –
Populus balsamifera is a large tree with narrow, open crown and erect branches and fragrant and resinous buds with a strong balm smell.
It is a fast-growing, generally short-lived plant, although 200-year-old trees have been found.
The trunk is straight and the branches are erect and sturdy and the bark is smooth and gray, with resinous, scented and sticky shoots that open to give leaves that are finely toothed in the shape of a heart.
The leaves are dark green in color and are shiny on top and silvery or brown underneath.
It is a dioecious species, therefore both in the male and female form.
The catkins appear before the leaves emerge.
The antesis is between April and May.
The seeds are cottony and are blown away by the wind.

Cultivation –
Populus balsamifera is a tree known for its strong and sweet fragrance, which emanates from its sticky and resinous buds. The smell has been compared to that of balsam fir.
This plant is harvested in nature for local use as a food, medicine, and source of materials.
However, it is an easy plant to grow that grows well in heavy, humid and cold soils; however it prefers deep soils, with neutral pH, rich and well drained.
This tree does not like shade and tolerates competition with other plants poorly.
It is a fast-growing and generally short-lived plant and is a pioneer species, which invades reclaimed land, old fields, etc., but which, as mentioned, poorly tolerates competition with other trees.
Remember that this plant has a very extensive and aggressive root system that can invade and damage drainage systems. Also, if grown on clay soils, they should not be planted within 12 meters of buildings as the root system can damage the building’s foundations.
The plant propagates by seed which must be sown as soon as it ripens in spring.
The seed has an extremely short life span and must be sown within a few days of ripening.
It is advisable to sow on the surface or simply cover the seed slightly in cold seedbeds.
The transplant in open field must be carried out at the end of summer.
It can also be propagated by wood cuttings formed in the current season; these must have a length of 20 – 40 cm, and must be rooted in late autumn in a sheltered bed outdoors or directly in the open field.

Customs and Traditions –
Populus balsamifera is a plant that has been used for some time in the medicinal field but also for edible use.
For edible use the inner bark is used which is often dried, ground into powder and then used as a thickener in soups etc. or added to cereals when making bread.
Catkins are eaten both raw and cooked and have a bitter taste.
For medicinal use it is a plant that was already used by several Indian tribes in North America who used it to treat a variety of ailments, but especially to treat skin problems and lung diseases.
In modern herbal medicine it is appreciated as an expectorant and antiseptic tonic.
The leaf buds are antiscorbutic, antiseptic, diuretic, expectorant, stimulant, tonic.
The buds of the leaves are covered with a resinous sap that has a strong turpentine smell and a bitter taste. These are boiled to separate the resin and the resin is then dissolved in alcohol.
Resin is a folk remedy, used as an ointment and detergent for sores, rheumatism, wounds, etc.
It is also made into a tea and used as a remedy for sprains, inflammation, muscle aches, etc.
For internal use it is instead used in the treatment of lung disorders and cough.
The buds can also be placed in hot water and used as inhalations to relieve a congested nose.
The cortex is cathartic and tonic, and although no specific mention has been seen for this species, the cortex of most, if not all members of the genus contains salicin, a glycoside that likely decomposes into salicylic acid in the body.
The cortex is therefore anodyne, anti-inflammatory and febrifuge. It is mainly used in the treatment of rheumatism and fevers, and also to relieve the pain of menstrual cramps.
From the inner bark a tea is obtained which is used as an eye wash and in the treatment of scurvy.
Among other uses, it should be remembered that the light and soft wood of Populus balsamifera is used as a paste and for construction. The resinous sap (or balsam of the tree) comes from its buds, and is sometimes used by bees as a disinfectant for the hive.
The branches containing the resinous buds are sometimes blown away by spring windstorms, and herbalists of many cultures seek them out for medicines. These sticky spring buds are a highly prized ingredient in medicinal ointments and other herbal preparations in North American and European indigenous herbal traditions.
Finally, from an ecological point of view, many animals use the twigs of Populus balsamifera as a food source. The leaves of the tree serve as food for the caterpillars of various moths.

Preparation Method –
The balsam poplar is a plant that boasts various uses both in the food field but above all in medicinal and herbal medicine.
The inner bark is often dried, ground into a powder and used as a thickener in soups etc. or added to cereals to make bread.
Catkins are eaten both raw and cooked.
Both the buds and the bark are used in various ways for medicinal uses and often used both externally and internally.
Tea is also obtained which is used by various folk traditions for various remedies.