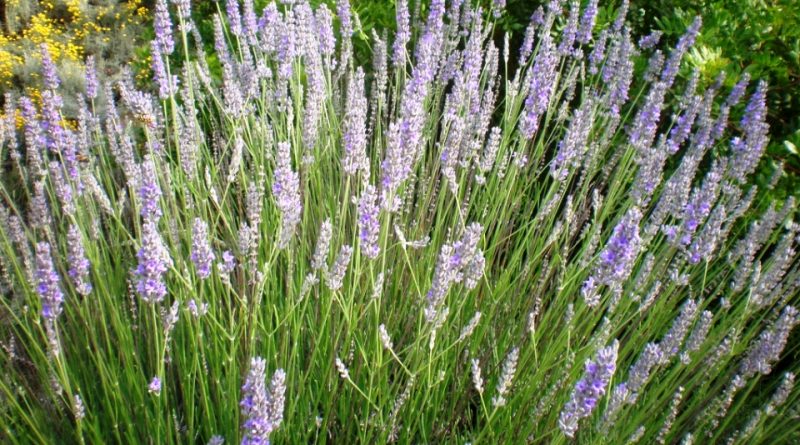 Etymology –
The term Lavandula is the diminutive of lavender (to wash).
The specific intermediate epithet comes from intermediate, halfway between two extremes, in reference to the characteristics of the two species of origin.

Geographic Distribution and Habitat –
Lavandula × intermedia is a hybrid species between the two species Lavandula angustifolia and Lavandula latifolia and therefore like these species widespread in the Mediterranean basin (also in the area of ​​Macaronesia), in North Africa and in Asia from the Arabian Peninsula up to ‘India.
The habitat is typical from temperate to subtropical.

Description –
Lavandula x intermedia is an evergreen shrub that grows up to 1.2m by 1m, with slow growth.
The leaves along the caule are arranged in the opposite way; they are often found bundled at the base of the plant. The leaves are colored ashy green. The lamina can be whole linear, lanceolate or pennatifida / pennatosetta.
The inflorescences are terminal with the flowers grouped in thin thyrsoid spikes at the end of long scapes. In the inflorescence there are persistent bracts, sometimes even colored and arranged in an opposite way or in a spiral; while the bracts are minute or absent. The number of flowers arranged in whorls varies from 2 to 10 or only one but in this case without bracts.
The flowers are hermaphrodites, zygomorphs, tetramers (4-cyclic), that is, with four whorls (chalice – corolla – androecium – gynoecium) and pentamers (5-meri: the corolla and the chalice have 5 parts).
The antesis is between July and September, and the seeds ripen from August to October.
The fruit is a schizocarp composed of 4 hairless and smooth nugs. The nuculae are provided with areoles and have various shapes, sizes and colors. Dehiscence is basal or lateral.

Cultivation –
The Lavender is a plant that should be grown similarly to other lavender species.
The propagation, of course, is not by seed (as it is a hybrid) but to reproduce the same hybrid it is necessary to proceed by cuttings.
The cuttings must be semi-woody, 7 – 10 cm long and placed to root in the shade between July and August.
Usually a high percentage will root within a few weeks.
It is a rustic plant, which grows spontaneously. It is resistant to both heat and cold, although it suffers from frost (it grows up to 600 m a.s.l. and hardly tolerates the cold of winter). In the sun it will be more luxuriant, as can be seen from the wonderful lavender fields of the South of France.
The most important prerequisite for growing lavender in the garden is therefore to identify a suitable area, sufficiently sunny, ventilated, not humid, away from other plants that could limit their development.
Watering must be regular, but never abundant. Water only if the soil has been dry for a few days. In fact, it does not need a lot of water and on the contrary it fears stagnation that lead to root rot.
To grow luxuriantly it needs a lot of light and little water and a well-drained soil that avoids the formation of dangerous stagnations for the health of the plant.
During the growing season, between March and May, the soil can be fertilized to favor the development of the aerial parts of the plant and obtain even more abundant blooms.
When growing for maximum essential oil content, the plant must be placed in a very warm and sunny position and will have higher yields in light sandy soils; the fragrance is particularly pronounced in chalky soils.

Customs and Traditions –
Lavandula × intermedia is an aromatic plant grown industrially for the production of essential oils.
The essential oil obtained from the flowers is exquisitely scented and has a very wide range of applications, both at home and on the market. It is commonly used in soap making, in the production of high quality perfumes (it is also used in “Eau de Cologne”), it is also used as a detergent and cleaning agent, food flavoring, etc.
When growing the plant for its essential oil content, it is best to harvest the flowering stems as soon as the flowers have wilted. The aromatic leaves and flowers are used in potpourri and as an insect repellent or to safeguard the linens in the closets.
It is also said to repel mice.
Lavender is also a commonly used herbal remedy.
The essential oil obtained from the flowers is anti-halitosis, antiseptic, antispasmodic, aromatic, carminative, cholagogue, diuretic, nerve, sedative, stimulant, stomachic and tonic.
It is not often used internally, although it is a useful carminative and nerve. It is mainly used for external use where it is an excellent tonic and tonic – if rubbed on the temples, for example, it can cure a nervous headache, and is a delicious addition to bath water. Its antiseptic properties also make it useful in treating burns, sunburns, sunburns, bites, vaginal discharge, anal fissures etc, where it also soothes the affected body part and can prevent permanent scar tissue formation.
Essential oil is used in aromatherapy.
Lavandula × intermedia, like other plants of the same species, can be used as a condiment in salads, soups, stews, etc.

Preparation Method –
Lavandula × intermedia is used both for medicinal use, for the production of essential oils at industrial level and for some food uses. It has a very aromatic flavor but it is too strong so it should be used in small quantities.
Fresh or dried flowers are used as tea. Fresh flowers are also crystallized or added to jams, ice cream, vinegars etc. as an aroma. An essential oil of the flowers is used as a food flavoring.