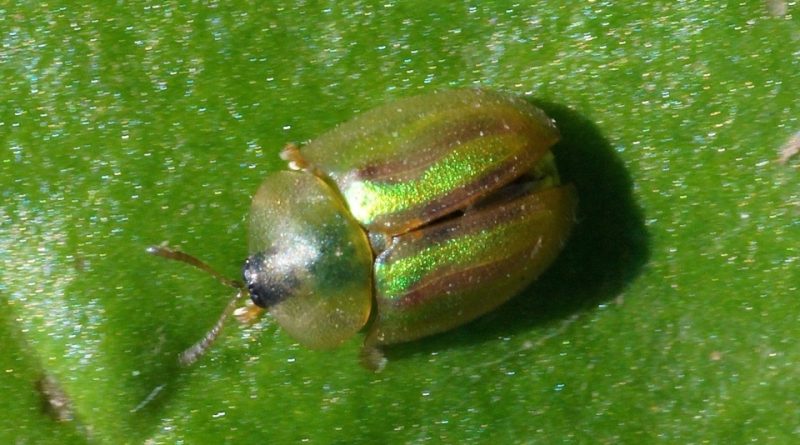 La Cassida (Cassida vittata Villers, 1789) is a beetle belonging to the Chrysomelidae family.

Geographical Distribution and Habitat –
The cassida vittata is a beetle widespread in Europe and that in Italy is particularly widespread in the central and southern regions. It is widespread, also in the Near East and in North Africa.
This insect lives on beet plants, on spinach, Atriplex halimus, Chenopodium album and other Chenopodiacee.

Morphology –
The Cassida is a long beetle, at the adult stage, about 5-6 mm, with a typically oval and convex shaped body.
The prothorax and the elytrons completely cover all parts of the body; the elytra are more or less dark green, dotted, have two parallel bands of metallic green, while the lower part of the head and the body are black.
The larvae are greenish in color, with a tendency to bluish, oval and depressed dorso-ventrally and with a body adorned with typical spiny formations.
The eggs are yellow, oval in shape with smooth corion laid in groups that can reach up to a dozen.

Attitude and biological cycle –
The Cassida vittata winters in the adult state in various shelters, such as ditches, dried herbaceous and shrubby vegetation, stones, stones, heaps of leaves, etc.
Arrived in the period of April, we begin to see the adults who first colonize the crops concerned along the edges or neighboring areas.
After about a week, the mating starts which are followed by the egg-laying on the underside of the leaves.
The eggs are hatched after an incubation period ranging from a few days to about a week; from these come out the larvae which, first live on the inferior page and, having completed a first moult, pass over the upper one.
The larvae, after 4 stages of development, pupate on the leaves to give the first adults after about a week.
In ordinary environmental conditions the insect performs 2-3 generations per year and sometimes, with more favorable conditions, it is able to complete a fourth one.

Ecological Role –
The Cassida vittata, as mentioned, lives at the expense of the leaf apparatus of which the adults devour irregularly roundish areas inside the flap. The larvae make erosions on the underside and then repeatedly pierce the parts between the secondary ribs.
In the initial period of the infestations these insects can affect limited areas, inside or on the edges of the crops, subsequently expanding, with the passing of the season and of the generations, to oil stain.
The cassida can therefore cause damage, with both stages feeding on the leaf parenchyma causing holes, consequent to the laceration of one of the two epidermis left intact.
For the containment of this insect it is necessary to intervene in the presence of actual infestation, limiting the interventions to the initial outbreaks. These interventions are normally carried out through foliar interventions, possibly combined with the simultaneous control of other phytophagous plants such as the Altica.
As a rule, up until now we have operated with possible chemical interventions or to contain outbreaks of infestation or to limit the damage when the attack is now generalized over the whole cultivation.
The use of agro-ecological techniques, such as the reduction of cultivation specializations, the intercropping with species unappetizing from the altic, the reduction of nitric fertilizations and other devices can contribute considerably to the improvement of biocenosis.