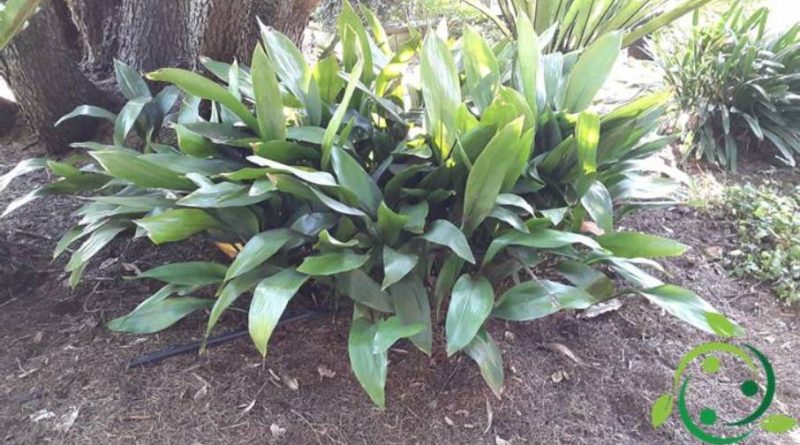 How to grow the Aspidistra

The aspidistra is an ornamental plant with origins in East Asia, in an area between Japan, China and the Himalayas and with some species originating in Africa.
In this card we will see how to cultivate the Aspidistra considering that it is a very robust species and adaptable to any type of climate and situation.
The Aspidistra is a plant that has a fleshy rhizome and large, hard, dark green and intense leaves, shiny and evergreen. In some species, as in the Aspidistra lurida, the leaves are streaked with white.
The characteristic of the flowers is that they grow almost in contact with the earth, they are not showy, often hidden by thick foliage, which suggests that some people never grow flowers. The flowers are purple-brownish in color, sometimes with light speckles; the flowering period is summer, after which blackish berries form.
Among the most widespread species of the Aspidistra we remember: the A. elatior, the A. typica, the A. caespitosa, the A. linearifolia, the A. tonkinensis and the A. filthy.
The Aspidistra can reach a height of about 70 cm and is a very long-lived plant.
Its cultivation can be carried out both in pot, where a well drained universal soil is to be prepared, and in the open ground. In the latter case it is good, especially in areas with not too harsh climate, to place the plant away from the shade of trees or shrubs; it is also advisable to add to the soil, where it will be grown in the garden, if it does not have these characteristics, peat, sand and inert draining material.
In general the Aspidistra is however a very rustic and long-lived plant, it adapts to any type of soil or exposure but, as mentioned, prefers shaded position and never the direct sun; in fact too intense solar rays cause a noticeable slowing down of the growth and a discoloration of the leaves.

The plant can withstand climates with considerable temperature ranges that can range from -5 ° to +40 ° C; in any case, however, he fears strong frosts.
If cultivated in pot, as regards the fertility of the soil, the Aspidistra needs a monthly fertilization in the summer with mineral fertilizer diluted in the water of the waterings.
If, on the other hand, it is grown in the garden, it is advisable to fertilize with mature manure or other well-humidised organic substance at the beginning of spring, taking care to mix the fertilizer well in the growing medium. The operation is then repeated every year over the same period.
As for water supplies, the Aspidistra is not very demanding, being a plant that resists well to short periods of drought, the waterings in summer must be done when the soil is dry, while they must be reduced in winter.
For plants grown in pots remember to carry out repottings at the end of autumn only if the roots have occupied all the available space.
The multiplication of this plant takes place by division of the tufts, carrying out the operation in the spring period, potting or burying the new plants immediately; moreover, if fresh fruits are available, they can be sown in autumn.
Finally the adversities that can affect this plant. In unfavorable environmental conditions, the aspersters can be attacked by cochineals and aphids, especially if fertilizers based on nitric nitrogen are used, which in general should never be used; in poorly drained soils, radical rots can occur due to fungal attacks. In addition, mite attacks are frequent in the apartments.