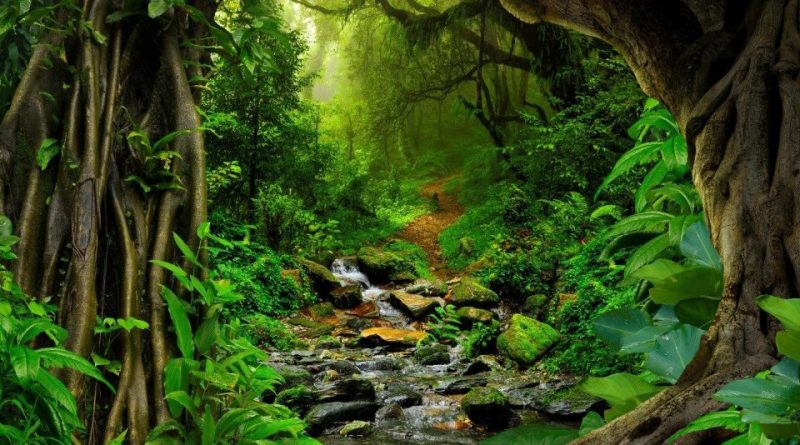 The tropical rainforest of Xishuangbanna is a natural area located in the province of Yunnan, in southern China.
It is one of the best preserved tropical forests in the world. It covers an area of ​​approximately 2,402 square kilometers, and is divided into many subtypes of vegetation, 58 of which are extremely rare and grouped by no less than eight types. Of these subtypes, fifty-eight are considered extremely rare; more than 3,500 types of plant species have been scientifically recorded here.
For its naturalistic value and for its high biodiversity this area is extremely important as it represents a real gene bank.
In the 2,402 sq km, the tropical rain forest of Xishuangbanna also hosts an immense number of fauna species. There are 200 specimens of Asian elephant, tigers, monkeys and leopards. Moreover, within this forest the Hani ethnic group lives with its typical houses made of mud, stone and bamboo. The forest is divided into many subtypes of vegetation.
Ultimately, this immense natural park has three main thematic characteristics: the first is obviously this forest still in its natural state, the second is represented by the flight of peacocks, particularly numerous in it, and the third by the ethnic customs of the Aini of ethnicity Hani.
The park is one of the largest breeding grounds for peacocks in south-eastern Asia, where more than 3,000 peacocks live. Peacocks are one of the main tourist attractions of this forest.
In the park there are many rare and oddly shaped trees. It seems to be in a large botanical garden. You can see a tree “eaten” from another tree here. “It is a phenomenon in which a” tree eats another tree “. The Banian fig lives as a parasite in another tree, wrapping it from above, drawing water and nutrients and becoming bigger and bigger. Slowly the wrapped tree becomes dry due to the lack of sunlight and water, and the fig of the banian takes its place. For this reason the locals call the fig of the banian “the ungrateful tree”.
But the most striking feature of this species (although not exclusive, as typical of other taxa of the genus Ficus) is the constant and massive production of aerial roots, which originate from the branches of adult individuals. These grow slowly downwards, also exploiting the humidity present in the atmosphere, until they reach the ground and penetrate it, becoming, in appearance and function, a real stem. The meaning of the new trunk is not so much to form an independent tree, but to act as a support for the growth and horizontal expansion of the branch that generated it. In this way the Banyan widens continuously outwards, the area covered by the foliage reaching incredible dimensions: it becomes a “forest tree”, composed of a large central stem, and countless secondary stems, like columns of a temple, of variable size and age.
In addition, some types of rare ferns and other precious species such as the podocarp grow in the tropical rain forest of Xishuangbanna.
But, as mentioned, the Hani live in the tropical rainforest of Xishuangbanna. The Hani are an ethnic group belonging to the 56 ethnic groups officially recognized by the People’s Republic of China. The Hani ethnic group, which is concentrated in the province of Yunnan, has a population of more than one million inhabitants. The Hani wear very beautiful traditional costumes, generally blue or black, and build their houses, of two or three floors, on the slopes of the hills, using materials such as bamboo, mud, stone and wood. They are polytheists and practice ancestor worship. They regularly hold rituals to honor the gods of heaven, earth, dragon tree, their villages and even their ancestors.

The Hani believe in the god of the village gate and those who live in Xishuangbanna often hold ceremonies in honor of this deity.
Within the Hani ethnic group we find the Aini, a subgroup of the Hani ethnic group that have slightly different customs.
The Aini is an ethnic branch that loves the black color and that for superstition avoids the white. In the Aini society men are more important than women, to whom the heavier manual jobs belong. The Aini boys choose their wife on the basis of two principles: dark skin, a symbol of beauty and a sign of good health, and sturdy legs, which represent strength in agricultural work. Girls with white and too thin skin are not very successful, while those with dark skin are the most popular. ”
Like all Chinese ethnic minorities, the Hani ethnic group also has its own traditional festivals.
Unfortunately this delicate balance between nature, traditions, peoples and cohabitation is about to be questioned by the “Western” man who is invading these territories with plantations of the rubber tree.
Rubber tree plantations for rubber production supplant all forests in the Chinese province of Xishuangbanna and are beginning to invade the highlands. Scientists fear that the expansion of rubber plantations to feed the voracious Chinese tire industry, the largest in the world, will destroy the Xishuangbanna ecosystem, the province with the largest variety of flora and fauna.
Until three decades ago, high mountain jungles and forests covered about 70 percent of Xishuangbanna, almost hiding China’s borders with Laos and Myanmar. Already in 2003 the surface was reduced to 50%. Unfortunately with the increase in rubber prices, almost every tree has been cut down to make room for rubber trees.
Of the immense Chinese rainforests there remains only some isolated protected area or at best after the slaughter of the rubber trees, the land remains uncultivated. In short, the Chinese rain forest has its days numbered. The official estimates of the Chinese government speak of 334 thousand hectares used in the cultivation of rubber, equal to 43% of the area of ​​the province, but we know that unfortunately this is a piloted data and it is probably much higher.
On the other hand, the Chinese consumption of rubber is very high: around 2.35 million tons in 2007 alone, of which more than 70% are imported from Thailand, Malaysia and Indonesia and other south-east Asian countries that implement the same deforestation policy to make room for the precious and much more profitable rubber trees.
Chinese economic growth is the continuing threat to forests: in addition to satisfying the immense internal demand, companies such as Goodyear, Continental, Michelin and Bridgestone produce about 330 thousand tires (and derivatives) with ever-expanding plants. According to estimates by China Rubber Industry Association, by 2010, around 780 thousand tons of rubber, 30% more than the current one, should be produced.
Unfortunately, the land available is limited, because the rubber grows well in the tropical or sub-tropical belt, areas that exist only in southern China. Since 1963 the race of private individuals who bought the land and allocate them “for other uses” has been unstoppable, destroying almost all of the Chinese rainforest. The gray-green rows of rubber replace the rainforest: of course the Asian fauna composed of elephants, tigers, peacocks and green monkeys is at risk.