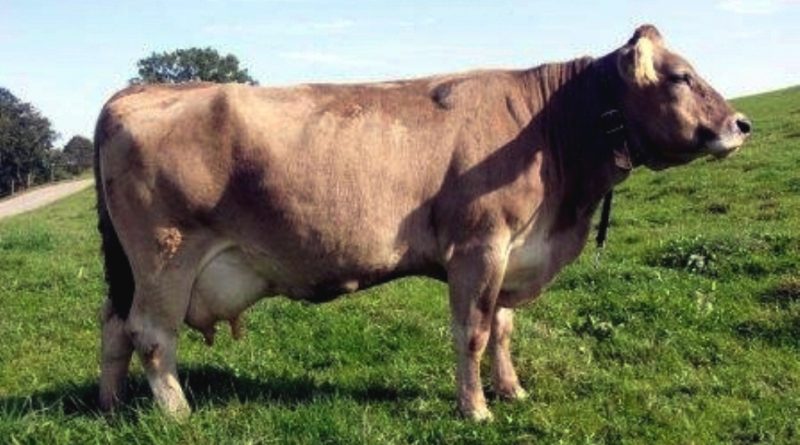 The Brown Mountain is a bovine breed (Bos taurus Linnaeus, 1758) bred in Germany, in particular in Upper Bavaria and in Baden-Wurttemberg, in a dual attitude.

Geographical and area distribution –
Brown Mountain is a breed that is bred in purity especially in the hilly and mountainous areas of Upper Bavaria and Baden-Wurttemberg.
Therefore, the Brown Mountain is mainly found in the south of the federal territory from Lake Constance to Garmisch-Partenkirchen, in the rugged mountain and alpine regions, as well as in the area of ​​pasture and fodder cultivation. Increasingly, however, Brown Mountain has aroused much interest, especially over the past few years due to its characteristic advantages throughout Germany.
The main distribution area of ​​the Bruna Tedesca cattle breed is in the south of Germany with the Allgäu region, a milk production area with a long tradition of cheese processing.
Thanks to the exceptional production capacity of cheese from the milk of the Brown Mountain, there has been a notable contribution to the excellent quality of the innumerable dairy specialties for which the international dairy industry of the Allgäu is famous both at home and abroad .

Origins and History –
The Brown Mountain is native to southern Germany, where it is called Deutsches Braunvieh or Allgau. Its introduction began in the 1700s directly from neighboring Switzerland. The roots of Brown Mountain can however be traced back to the so-called bos brachyceros originating in the Caucasus and the Middle East and probably crossed in Europe with the Uro (Bos taurus primigenius). Subsequently the cattle of this breed present in the southern German area was repeatedly crossed, in the XIX century with cattle coming from the Swiss Brown Swiss. Subsequently various vicissitudes related to the lack of proper descendants, due to the strong sales of cattle, the losses due to rinderpest and the food competition for the expanding dairy industry, the cattle heritage of the Allgäuer region was increasingly replenished from other brown cattle from Austria and Switzerland. In 1893, brown cattle breeding was mainly determined by Swiss bulls and only in small part by Tyrolean and Vorarlberg cattle, from which finally an independent and important breeding developed.
Recently the Brown Mountain was later improved with Brown (USA) blood. In Germany, Brown Mountain represents about 10% of the registered cattle. The Genealogical Book was established in 1893.

Morphology –
The Brown Mountain is characterized by a dark brown coat (darker than the Bruna Switzerland) which has darker shades in the bull.
However, for a long time the external characteristics, such as mantle, shape and direction of the horns, etc., are in the background. The muzzle is black with a white halo. The horns are short, fine, clear and black on the tip. The calves have a gray color until the age of three months.
In general this breed has a good conformation, a good balance of the relationship between milk and meat production, even if milk production prevails and is characterized by less harmonious and beautiful animals than Bruna Switzerland.
The selection, however, allowed a noticeable improvement in the udder and the lactose characteristics, maintaining the qualities of the breed which are the rusticity and the exploitation of the coarse fodder of the region.
The adult cows of this breed weigh on average 650 kg.

Production aptitude –
The Brown Mountain cows are characterized today by their high performance potential with an exceptional protein content and an unsurpassed protein quality (kappa casein B).
Due to the regional orographic specificity of the Alpine landscapes, their average performances are increasingly provided by larger farms.
In intensive farming they show their full capacity with a milk production that can reach over 13,000 kg.
The high profitability of the Brown Mountain cows does not derive only from the good revenues linked to their high performances, but also, in large part, from the lower costs of milk production.
In general, therefore, these cattle have an excellent rusticity and dairy aptitude. Breeding conditions are better than those in Switzerland and Austria.
The average production of the controlled cows (with 1990 data) was 5,393 kg, with 3.98% fat, 3.43% protein. Meat production performance is also moderate.
In summary we can say that the Brown Mountain bovine breed has: high milk production, high protein content and excellent production and quality of the cheeses. All this with a high efficiency in the transformation of basic feed and local pastures.
Furthermore, these cattle are characterized by a long life, good performance and health of the animals that are characterized by strong limbs (suitable for the inaccessible areas where they are bred), calm temperament and high adaptability and climate tolerance.