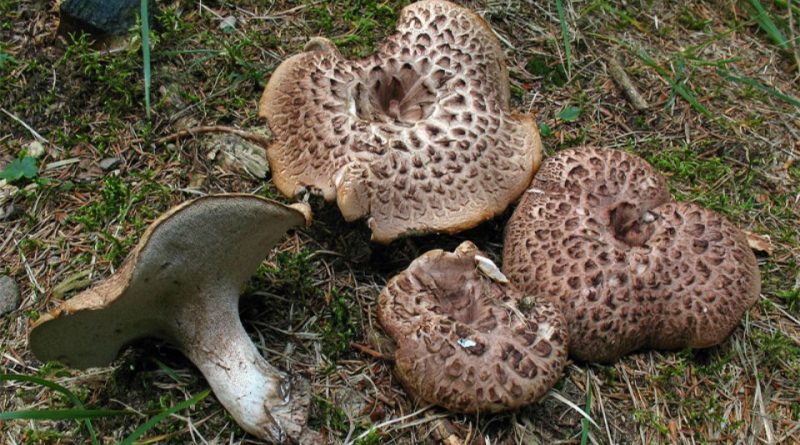 The shingled hedgehog or scaly hedgehog (Sarcodon imbricatus (L.:Fr.) Karsten) is a basidiomycete fungus of the Bankeraceae family.

Systematics –
From a systematic point of view it belongs to the Eukaryota Domain, Fungi Kingdom, Phylum Basidiomycota, Basidiomycetes Class, Thelephorales Order, Bankeraceae Family and then to the Genus Sarcodon and to the S. imbricatus Species. The term Hydnum imbricatum L. 1753 is synonymous.

Etymology –
The term Sarcodon comes from the Greek σάρξ, σαρκός sárx, sarcόs meat and from the Greek ionic ὀδών odón tooth: therefore with fleshy spines. The specific epithet imbricatus derives from imbrex embrice, tile: for the scales of the cap arranged as overlapping tiles.

Geographical Distribution and Habitat –
Sarcodon imbricatus is a symbiont fungus that grows gregarious in mountain conifer woods: it bears fruit in the period between summer and autumn. 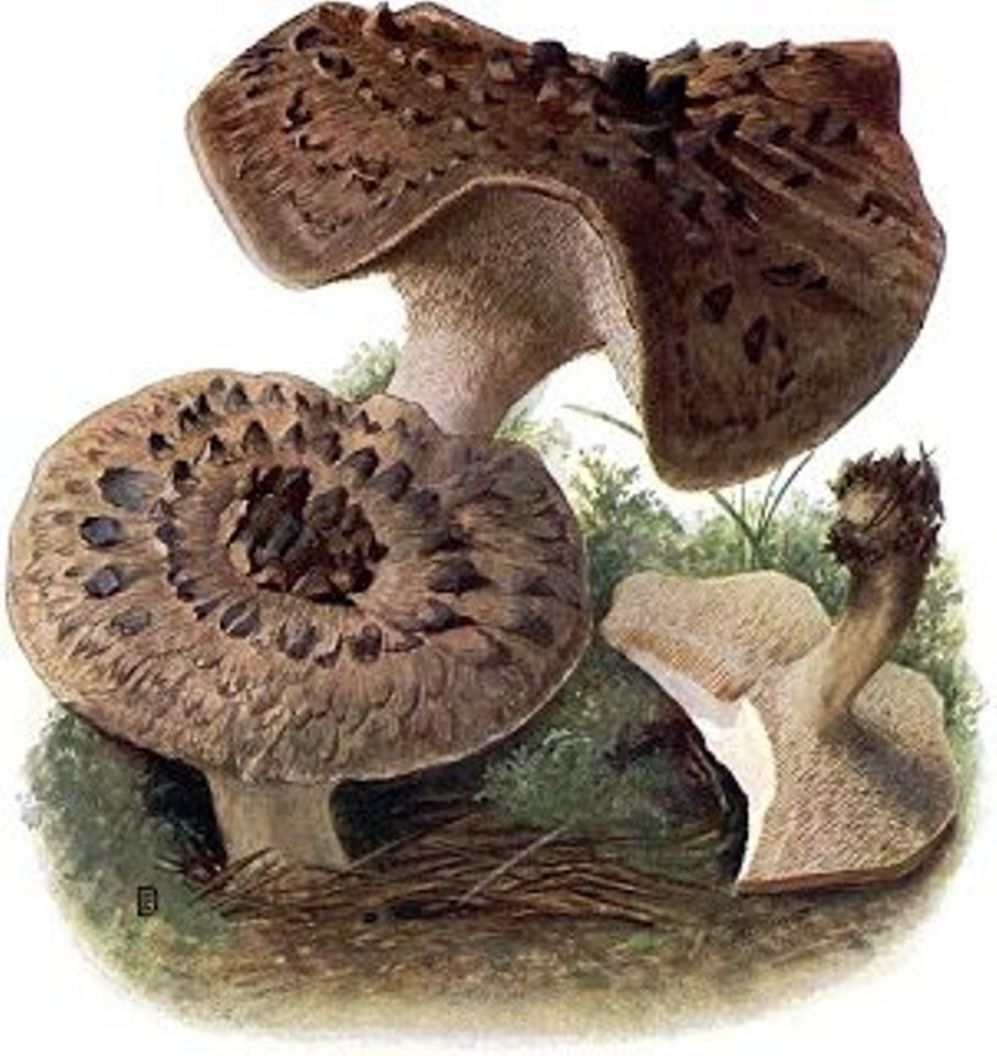 Recognition –
The shingled hedgehog can be recognized by the convex or flat cap of 6-30 cm, sometimes depressed in the center, with initially finely fluffy and then shiny surface, with wide flaky, concentric, darker brown plates than the bottom of the cap, gray-brown , persistent or a little deciduous.
The spines are decurrent, about 1 cm long, dense, whitish at the beginning and then from gray-brown to brown.
The stem is short, thick, 5-8 cm x 1.5-2.5 cm, of a gray-brown color.
The flesh is whitish, then light gray-brown, thick, consistent, with a bitter taste, a strong and unpleasant odor in the adult fungus.
At the microscope, spores of a reddish-brown color can be seen.

Cultivation –
Sarcodon imbricatus is not a cultivated mushroom.

Uses and Traditions –
This fungus also known by the common name of Lingua de vacca is considered by many seekers to be a brown and scaly variant of the Hydnum repandum; in fact it belongs to a completely different genre.
It could be confused, to a summary analysis, with Sarcodon versipelles and Sarcodon leucopus which are not edible; moreover very old and bleached specimens could occasionally be confused with Polyporus squamosus, which however has pores under the hat, instead of spines.
It is a fungus that is considered by many an excellent dry seasoning, reduced to powder. Instead it is a very mediocre mushroom if eaten fresh.

Preparation Mode –
–The Sarcodon imbricatus is an edible aromatic mushroom but exclusively as a seasoning, dried and reduced to powder; it is in fact poor from fresh. It lends itself very well to being used as a flavoring; great for dressing sauces, soups or risottos. If it is used in the mixture it is advisable to use little because this mushroom tends to prevail over the other aromas, canceling and canceling the other aromas.
It is also advisable to preferably consume young specimens and it is advisable not to consume specimens that are too old, as they become too leathery and slightly indigestible; in this case it is advisable to pre-dry them before drying them.
Precisely because of this characteristic and because its smell recalls that of the stock cube, it is also called “mushroom nut”.