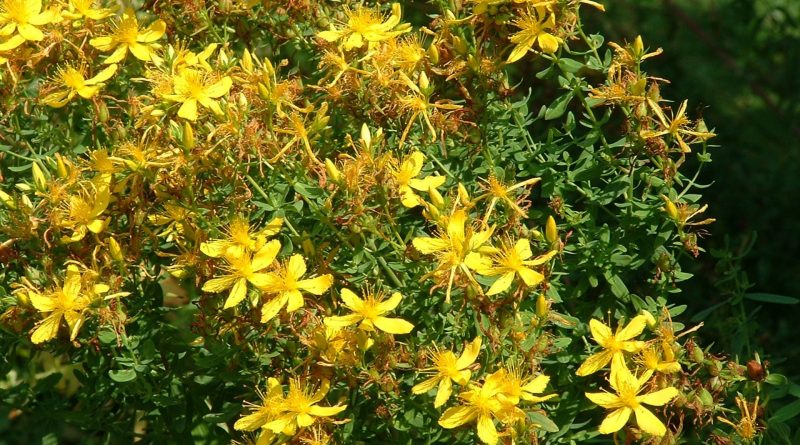 The hypericum (L.) or St. John’s wort or scacciadiavoli (Hypericum perforatum L.), is a medicinal plant of the genus Hypericum with antidepressant and antiviral properties.

Etymology –
The name of the genus from the Greek “yper” = above and “eikon” = image to mean “I cast out images, shadows, distance spirits”. Linnaeus, on the other hand, attributes a different etymology, deriving the name from “yper” = above and “eicos” = similarity, since an element similar to an image is visible on the petals; “-Ico” dates back to the verb “eico” = I look similar to, I appear. The specific name refers to the punctuation of the leaves, which when viewed against the light appear to be perforated by many small holes.

Geographical Distribution and Habitat –
It prefers sparse and bright woods, however outdoors all year round, as it does not fear the cold. Originally from the British archipelago, it is now widespread in all regions of Italy and throughout the world. It prefers sunny or semi-shady and dry locations such as abandoned fields and ruderal environments. 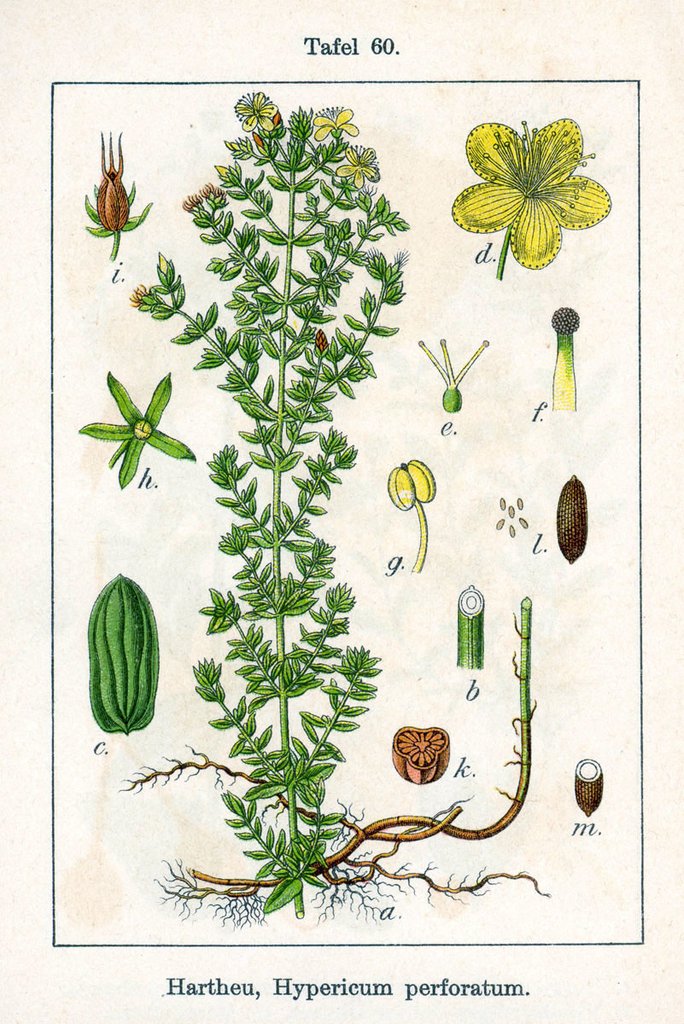 Description –
It is a semi-evergreen, glabrous perennial plant, with an erect stem crossed by two longitudinal strips in relief. It is easily recognizable even when it is not in bloom because it has leaflets that appear pricked against the light, in reality they are small oily vesicles from which the name perforatum derives, while at the edges are visible blackheads, glandular structures containing Hipericin (hence the name red oil grass), these glandular structures are present above all in the petals. The leaves are opposite oblong. The golden yellow flowers have 5 delicate petals. They are gathered in corymbs that reach their maximum flowering around June 24 (recurrence of San Giovanni) from which the popular name of “St. John’s wort”.

Cultivation –
For the cultivation technique, consult the following card.

Uses and Traditions –
This grass blooms along the edges of the fields, woods and lanes, in the hills and meadows, from July to September, and bears the popular names of Pilatro, Mille buchi, Parforata, Pirico or Piriconi. These popular denominations demonstrate its great importance as a medicinal plant.
It reaches a height of 25 – 60 cm, is very ramified and blooms in large inflorescences with yellow-gold selvedges. To recognize it with certainty, if you crush a completely open flower; a red juice will flow from it.
For the preparation of herbal tea and baths the entire flowering plant should be used, while for San Giovanni oil only flowers are used.
The ancient popular beliefs linked the blood-red balsamic juice of flowers with the blood and wounds of our Lord Jesus Christ. San Giovanni oil is actually the best oil for wounds given the analgesic, anti-inflammatory and healing effect. A legend of this herb (which boasts of such majestic folk names) recounts: «When the Lord’s favorite disciple had been mortally saddened at the foot of the cross, he gathered the seedlings bathed in sacred blood to give them to the faithful in memory of death of our Savior. »The red juice gives the mysterious impression of a drop of the Savior’s blood hidden in the red mood of golden yellow flowers. On St. John’s Day, a symbol of sacred powers of light and warmth, the Hypericum in bloom (St. John’s Wort) shines with superb splendor. In past times the maidens wove them crowns, and those who danced around the fire of San Giovanni, had to wear a garland on their heads called the crown of St. John. During this night full of mysteries, twigs were also thrown into the water, and the young virgins guessed based on the re-flowering of dried flowers, if they would get married in the coming year.
In Upper Austria there was an ancient custom according to which the farmer placed the St. John’s wort in the middle of two slices of bread to offer it to the beasts to keep diseases away from them. Unfortunately this custom is now cultivated only among a few religious families. All this shows us how much esteem the Hypericum had enjoyed since ancient times. Iperico’s ingestion of the herbal tea is recommended in nerve alterations and nervous disorders of all kinds, in trauma and stress injuries.
With the Hypericum, trigeminal neuralgia is fought, drinking three cups of herbal tea a day and rubbing the sore areas with oil (San Giovanni oil) for a certain period. It is called “Arnica dei nervi” a tincture of Hypericum that can be prepared on its own and applied with good results against nervous diseases, neuritis, neuroses, nervous weakness and insomnia. With the use of Hypericum they also heal pronunciation disorders, restless sleep, hysterical attacks, sleepwalking as well as nocturnal enuresis and depressions. Experience has taught me that against all these disorders it is not only the internal application through herbal tea, but also the external application of the Hypericum sitz baths (see “Preparation method”). They are six per week, followed by a foot bath each time. This treatment is advisable in all disorders due to nervous dysfunctions.
Developmental girls should drink two cups of St. John’s Wort tea a day; it promotes the development of the female organs and eliminates irregularities in the menstrual period. A very appreciated simple is the Oil of San Giovanni. He should never miss at home. It is easy to prepare it yourself. It maintains its healing power for two years and is applied with good results both on open wounds, recent lesions, hemorrhagic effusions, glandular swellings and, as a cosmetic, on the rough skin of the face, both as an effective balm against back pain , lumbago, sciatica and rheumatism. In order to have the best home remedy for burns and burns on hand, the flowers are soaked in linseed oil. This oil is also used against sunburn.
Babies with abdominal pain settle down as soon as their tummy is massaged with a little St John’s oil. I know a peasant woman who treats all injuries with San Giovanni oil, even those of domestic animals. One day her husband had slipped his hand into a car, seriously injuring himself. Saint John’s oil packs soon freed him from all pain and his wounds healed without problems.
– Another farmer instead treated with the St. John’s oil a bad wound at the foot of his horse.
A doctor found the swelling of an abdominal lymphatic gland in an eight-year-old girl. Every time the child was exposed to the cold, she suffered a stomach ache, finally even every day and especially in the morning. The mother of the child had read in the previous edition of this book that the Hypericum oil was used against glandular swellings. Whenever the child complained, she massaged her tummy with the aforementioned oil and after a while everything had passed.

Preparation method –
Herbal tea: Scald a teaspoon filled with Vi of liter of boiling water and let it rest briefly. San Giovanni oil: The flowers picked during a sunny day should be bottled, without compressing them, up to the neck, and then covered with refined oil olive. The closed bottle is left for a few weeks in the sun or near the stove. After a while the oil will turn red. It is filtered through a cloth, the residues are squeezed out, the oil is stored in dark glass bottles. For burn injuries, instead of olive oil, the linen is used. Hypericum Tincture: In a liter of brandy, two handfuls of flowers are soaked in the sun, allowing the bottle to rest for three weeks in the sun or near a heat source.
Sitz baths: A bucket of Hypericum (stems, leaves and flowers) to which cold water is added until it is filled, it is left to rest for one night. Before the hip bath, bring the contents back to the boil and then add it to the bath water. Duration of the sitz bath: 20 minutes (see General notes under “Sitz baths”).