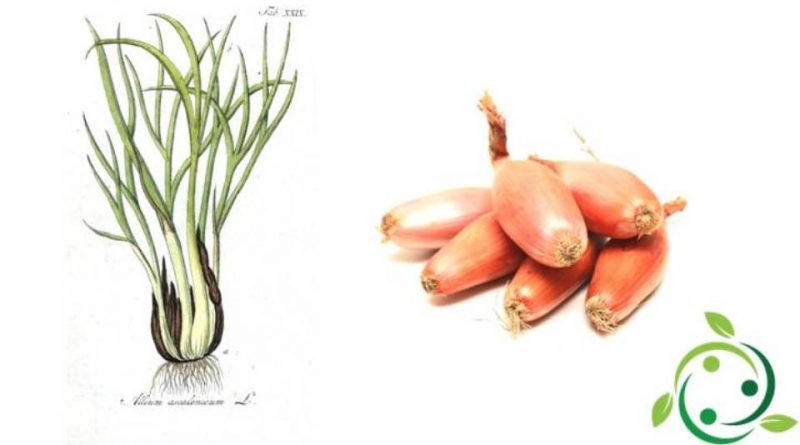 Shallot or shallot (Allium ascalonicum L.) is a herbaceous species similar to onion and used both as a spice in cooking and for therapeutic purposes.

Origins and History –
The Shallot, which has a flavor halfway between garlic and onion, albeit more delicate, was once the “poor” companion especially of the Romagna farmers.
The name of this species seems to derive from Ascalon, a city of ancient Palestine where, in addition to its probable origin, its cultivation began for at least 3000 years.
The shallot was already in use among the Roman peoples and, according to some scholars, it would have been brought to Europe by the peoples who migrated from the Middle East, including the Celtic peoples. In fact, the term allium is a Celtic word meaning “burning”. Mentioned since ancient times – the quotations from Ovid and Boccaccio are famous – the shallot is therefore the protagonist of a pluri-millennial, peasant and rural history: in the Liber de Coquina written in the 13th century. at the Angevin court in Naples, it is indicated as an ideal condiment for meat and as a substitute for onion, leek and garlic.
There are two main varieties of the shallot: the gray-skinned one and the golden-skinned one. The first variety is characterized by a slightly oblong shape, intense aroma and particularly hard skin. The golden-skinned one is divided into three varieties cataloged according to the shape of the bulb: long, semi-long and round. We particularly remember the IGP shallots of Romagna and the Campodimele shallots.
In addition to food purposes, this vegetable has numerous therapeutic properties.

Description –
Shallot is a plant of about 20-30 cm in height with cylindrical leaves.
Shallot varieties all resemble onions (botanically considered a variety), but unlike these they have a composite bulb (not unique). The inflorescence is, as in all species of the genus Allium, formed by multiple trimer flowers.
It has small and black seeds.

Properties and Uses –
The shallot, although the young green leaves of the plants are very tasty and can be used chopped in place of the chives, is mainly cultivated for its bulbs, edible to 70%. In general, the same leaves are never collected in large quantities precisely because this would reduce the agricultural yield of the bulbs.
The bulbs have a less intense flavor than the onion, more aromatic and slightly garlicky, but, unlike garlic, they are not too acrid. In general, precisely because of its delicate and characteristic aromatic contribution, the shallot is proposed as a substitute for onion for the preparation of appetizers and serving dishes in the most refined cuisine or more attentive to delicate tastes (it also has the advantage of making the breath).
The shallot is consumed both cooked and raw, although the latter use is more recommended because, for example, in sautéed potatoes, of which it is suggested as a base for soups or risotto, the shallot tends to become bitter. The shallot also contains slightly less water than the onion, therefore it is more subject to charring during cooking.
Shallot, in Europe, is used in the preparation of salads, omelettes and savory pies (such as Quiche), but is mainly used to flavor different types of preparations, such as appetizers, side dishes and fine sauces such as Bordolese or Bernese; in Northern Europe, and in particular in France, for example, shallots have always been used after being pounded in a mortar and mixed with butter or cream cheeses, to accompany grilled fish or meat. In Italian regional cuisine, finely hand-cut bulbs are present in many sauces for tagliolini or egg noodles. In Mediterranean cuisine, shallots are sometimes used instead of lemon to flavor raw seafood.
In Central Asia, where the oldest varieties originated, shallots appear as a fundamental ingredient of Iranian cuisine; for example, it is one of the herbs used in the typical Sabzi polo, a dish served for the Iranian New Year.
In Southeast Asia, shallots are widespread in all the kitchens in the area: interchangeably with onion, they are used as the basis for many pickled preparations, salads and fries (in southern China and Indonesia, slices are eaten thin fries such as chips) and is finally a fundamental spice to flavor fried rice, momo (from Nepalese rolls and many dishes from southern India: in these areas, shallots are much more frequently than in other regions of Asia distinct from onion and has a role of main ingredient in dishes such as sambar (a dish based on lentils) and Vathal Kuzhambu (another dish of Tamil cuisine); shallots collected in red vinegar are common in many Indian restaurants, served with sauces and papadum on the seasoning tray.
Also eaten raw, the shallot maintains its therapeutic properties and brings benefits to hair nails contributing to their strengthening.
Among its main properties and therapeutic uses we mention:
– Antioxidants: it has a good content of antioxidant compounds, in addition to vitamins it contains quercetin and kaempferol, two substances that are released when the shallot is crushed and which in turn produce another substance, allicin. This compound seems to be able to intervene effectively on some types of cancer such as lung, stomach, colon and breast cancer.
– Anticancer: according to the University of California, diets rich in foods belonging to the Liliaceae family are associated with a lower risk of developing tumors.
– Cholesterol: allicin also has another very important property for our health, it is also able to lower the levels of bad cholesterol in the blood with beneficial effects in the prevention of arteriosclerosis and heart disease such as heart attack and stroke.
– Lowers blood pressure: potassium and allicin, combined together, have beneficial effects on hypertension. Potassium is an electrolyte with vasodilating properties and is therefore able to relax the walls of the blood vessels allowing a greater flow of blood. Allicin, on the other hand, releases nitric oxide into the body which reduces blood pressure.
– Diabetes: the allyl sulphide contained in this vegetable has properties useful for regulating blood sugar levels, therefore the consumption of shallots is recommended for those suffering from diabetes.
– Good for the brain: shallots contain folic acid which is essential for the proper functioning of the brain and mental health.
– Pregnancy: in the right doses, folic acid is also important for pregnant women as it prevents malformations of the neural tube in children who are to be born.
Its properties are linked, as mentioned, to the particular composition.
Shallots have been reported in the scientific literature to contain more flavonoids and phenols than any other member of the onion family. Among the flavonoids, plant substances and antibiotic action, anthocyanins appear in particular, substances that give the bulb a purple color, very useful for capillaries and for circulation in general, and quercetin, a molecule studied in the field of experimental oncology and pressure regulator diastolic (the least).
The volatile components responsible for the aroma are instead retained by the sheath that surrounds the bulb, and are activated when it is incised. The enzyme allinase, which is part of the defensive system that Allium plants adopt to combat herbivores, is responsible for the catalysis of the chemical reactions involved in the production of volatile compounds that give these foods the characteristic aromas, smells and tear-producing properties. In particular, the latter include allyl sulphide, a volatile thioether which has a diuretic and disinfectant effect (vermifuge and bactericidal). For its potential disinfectant effect, in the Indian tradition, shallots, mixed with sugar (even unrefined, such as jaggery), is used as a home remedy for sore throats.

Preparations –
Before using the shallot, the external part (of paper consistency) must be eliminated and the ends cut. Shallots must never be put under water to mitigate the burning sensation they cause to the eyes, since this negatively affects their taste.
Also, for its storage, it is best to avoid the refrigerator and plastic bags. Shallots can also be kept for a long time in a cool place such as the pantry, but only in paper bags. Alternatively, you can put it in jars in oil. To prepare the shallot in oil, first clean it thoroughly by removing the peel. Then it is covered with coarse salt for a couple of days and then washed and placed in a jar full of vinegar for 15 days. Finally, it is washed again and placed in a jar sterilized with extra virgin olive oil and pepper. So it can be kept for up to a year.
The shallot is used very often in the oven preparations inside a vegetable pan or to flavor meat or fish. It can replace the onion in a sauce or it can be used as an extra ingredient to give more flavor and aroma. It is excellent in soups and broth for its delicate and aromatic taste.
It can also be stewed alone in a pan with aromatic herbs, or caramelized or sweet and sour. It is a fundamental ingredient in the preparation of two famous sauces, the Bernese and the Bordeaux, and is also very good in the meat sauce. The green leaves of the shallot can be cut thinly and added to salads. It is also good to eat raw, in fact for many years the peasants have consumed it together with bread and wine from its fields at the snack time.