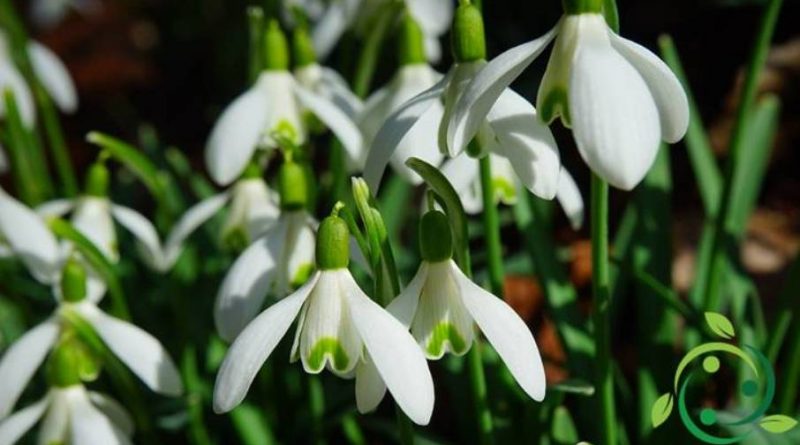 How to grow Snowdrops

Snowdrops are a genus of herbaceous plants belonging to the Amaryllidaceae family. Among these species the most widespread is that of Galanthus nivalis which is native to a vast area of ​​Europe, limited to the west by the Pyrenees, to the north by Poland and to the south by Turkey; this species was introduced in other regions and largely naturalized.
Snowdrops, also known as “morning stars” are small bulbous plants found in Italy between 0 and 1500 meters above sea level, in the northern regions; in the south and some islands (excluding Sardinia) the snowdrops grow only in the high mountains.In this sheet we will see how to cultivate the Snowdrop respecting its climatic and pedological needs.
The Snowdrop is a fairly rustic plant, very resistant to cold, which is grown in the garden for ornamental purposes to adorn borders and winter flower beds.
The Galanthus nivalis is recognized for having the lower part of the bulb of whitish color (similar to a clove of garlic) from where small contractile collated roots are generated which penetrate the ground for a few centimeters. From the apical part, radical or inferior leaves and upper leaves are generated, both of a bright green-bluish color.
The lower or radical leaves are small membranous sheaths; the upper ones 10 – 20 cm long and 3 – 7 cm wide are in the shape of a ribbon with a rounded apex. The leaf lamina has a fleshy consistency, is covered by an evident smooth central rib and is covered by a thin layer of waxy bloom. The upper leaves, paired two by two, sprout from the ground forming very decorative ribbon-like tufts.
The flowers are hermaphroditic, actinomorphic, generally solitary and with an unpleasant smell; they have the shape of small white bellflowers carried by erect peduncles that protrude from the underground bulbs. Each floral peduncle is accompanied by a small transparent spate that is 3-4 cm long, serrated at its end and provided with two green and brilliant ribs. the corolla has the shape of a star and is formed by petals about 20 mm long. Snowdrop flowering begins in winter starting in January and continues until March.
Pollination is entomophilous and occurs through bees. After fertilization, fruits are formed that are ovoid fleshy capsules of about 7 mm that contain numerous seeds, very small and elliptical, provided with a particular excrescence called strophe, very appetite by ants.

For the cultivation of snowdrops it is necessary to choose partially shaded because these plants do not like the direct sun. As mentioned, they are plants that resist cold and frost very well. The preferred soil is made up of moist, heavy soils, rich in organic and very draining substances.
The Snowdrops do not have, generally need of irrigation interventions, as they vegetate and bloom in a period in which the demand is assured by the rain water; in any case in particularly dry periods it is advisable to water them regularly to favor their flowering and vegetative development.
For nutrient inputs, they are plants that are satisfied with the elements present in the decomposing material typical of soils and the climatic moment where they are to be cultivated.
The multiplication of snowdrops can take place both by seed, by bulbs or by division of the tufts.
If you want to start from the bulbs, they should be planted in autumn in a soft, soft soil, rich in humus and cleaned from weeds; the depth of positioning of the bulb must be at least 5 cm deep with the apexes facing upwards. In addition, the roots of the bulbs must be carefully covered with earth to allow rapid rooting. Once the installation phase is over, you must immediately irrigate. Subsequently, once the plant is formed, it does not require particular maintenance interventions but only periodic scerbature and the division of the cloves every 2 years.
Snowdrops do not require proper pruning but, also for aesthetic reasons, they must be cleaned of dried or rotten leaves and withered flowers.
As for diseases and pests we remind you that the Snowdrops do not fear the common animal parasites but can be subjected to fungal or cryptogamous diseases in the presence of too compact and poorly draining soil.