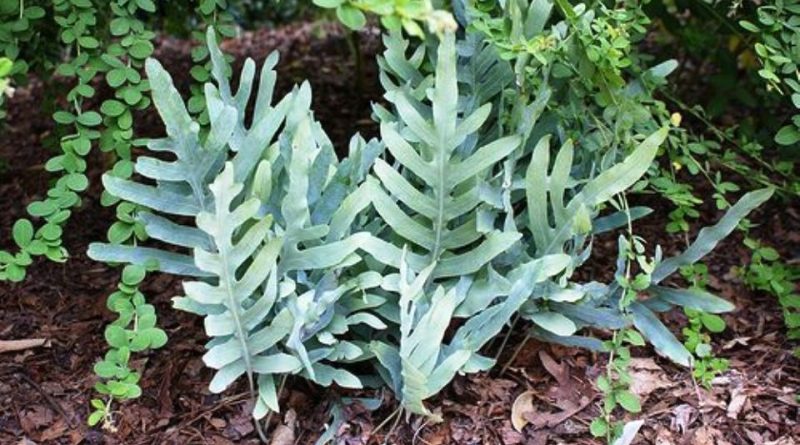 The Golden polypody (Phlebodium aureum (L.) J.Sm.) is a fern belonging to the Polypodiaceae family.

Etymology –
The term Phlebodium comes from the ancient Greek phlebo, an element forming words that means “one or more veins”.
Aureum d’oro, from gold aurum: due to the brown-golden color of the scales.

Geographic Distribution and Habitat –
Phlebodium aureum is an epiphytic fern native to the tropical and subtropical regions of the Americas.
It is present in an area that includes the eastern area of ​​the continents, extending north in the United States to Florida and the extreme south-east of Georgia, and south through the Caribbean (Bahamas, Puerto Rico and Lesser Antilles) and South America. north and east to Paraguay. It is the only Phlebodium species found in North America; the other species are all confined to South America.
Its habitat is rarely terrestrial as it usually colonizes tropical rainforests and dwarf palms of subtropical forests. It is common in the rainforests of the Caribbean and northern South America. It grows in various habitats in Florida, including swamps and can therefore apparently tolerate a wide range of microclimates. Its restriction in the tropics and subtropics is easily explained by its intolerance to any climate with the presence of short and light frosts. High light levels are also critical for the growth of this species and its deciduous habit allows it to invade relatively arid areas.
From an altimetric point of view it grows at an altitude of 900 – 2,600 meters in Peru and at an altitude of 1,200 – 2,200 meters in Guatemala. 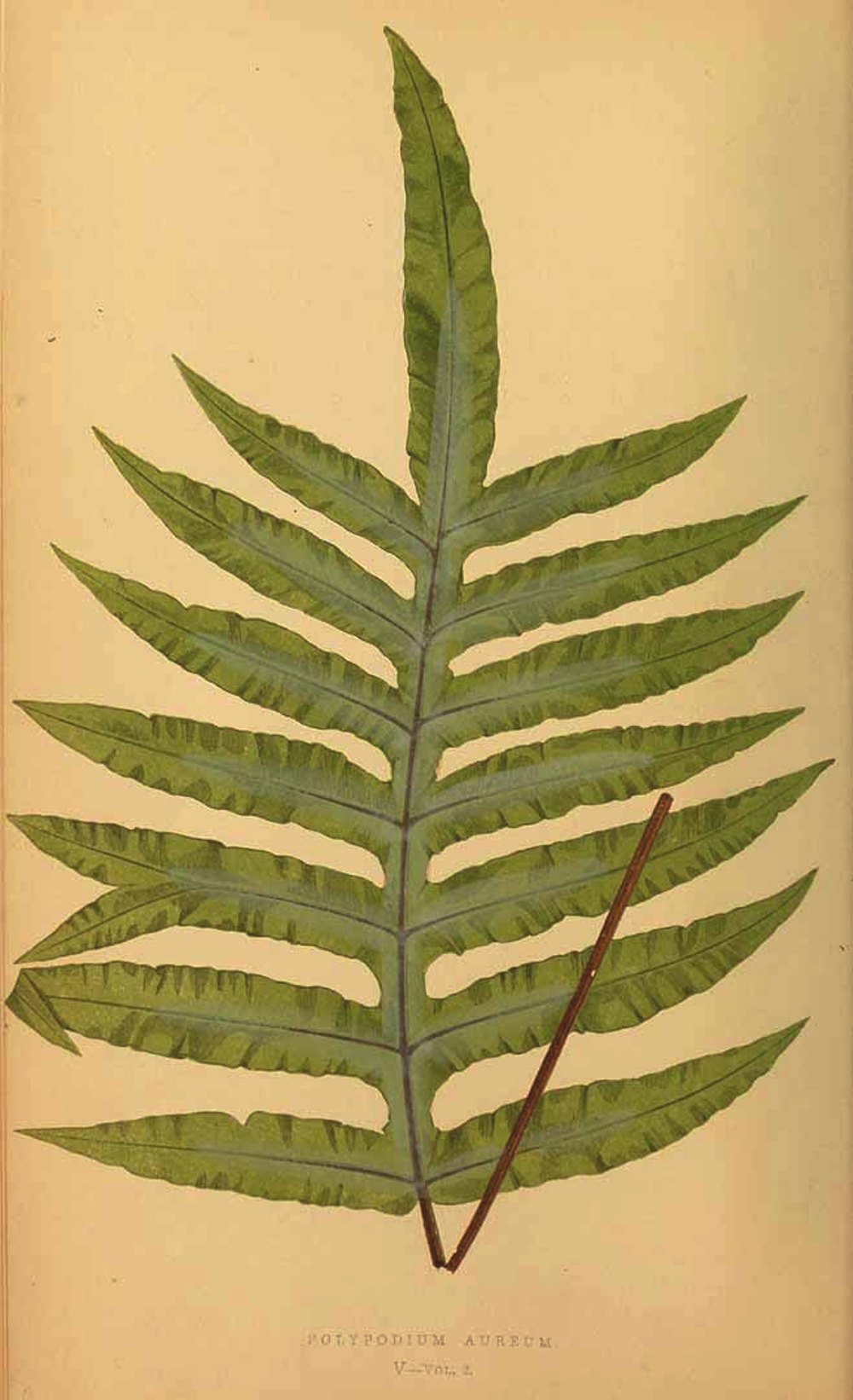 Description –
Phlebodium aureum is a rhizomatous fern, with a creeping rhizome 8–15 mm (rarely 30 mm) in diameter, densely covered by the golden-brown scales that give the species its name.
The fronds are large and pinnatifid (deeply lobed), 30-130 cm long and 10-50 cm broad, with the presence of up to 35 fins; these vary in color from bright green to glaucous green and have wavy margins.
They have several round sori running along each side of the midrib of the fin, and the tiny spores are wind-blown. The fronds are evergreen in areas with rainfall all year round, semi-evergreen or briefly deciduous in areas with a marked dry season.

Cultivation –
The Golden polypody is an epiphytic, or occasionally terrestrial, fern that is sometimes harvested in the wild for local medicinal use. It is sometimes grown in Honduras and semi-grown in Mexico for medicinal purposes.
The rhizomes are sold in local markets in Mexico, where it is known as ‘Calaguala’.
It can also be grown in greenhouses in non-tropical climates if the night temperatures do not drop below about 5 ° C. Several cultivars were selected with leaves ranging in color from gray-green to silver-green to blue-green or with crystal or very wavy frond margins.
The plant propagates by rhizomes or spores.

Customs and Traditions –
Phlebodium aureum is a plant that is used above all in the folk medicine of the peoples of Central and South America and well adapted to cultivation and is appreciated both as an ornamental plant and in herbal medicine.
There are no known edible uses.
Decoctions of this fern have been used as a panacea in Central American folk medicine. These tonics have been prescribed for a multitude of ailments, ranging from asthma to heart disease. Modern medicine has also studied P. aureum, often using the deprecated synonym Polypodium leucotomos.
The oral consumption of “Polypodium leucotomos” extract has also been studied for the treatment of dermatological disorders including melasma, vitiligo, psoriasis, light polymorphic rash, atopic dermatitis, post-inflammatory hyperpigmentation, photoaging and skin cancer.
It has been shown that oral consumption of “Polypodium leucotomos” extract protects the skin from damage from ultraviolet light. Clinical studies have shown that “Polypodium leucotomos” extract provides photoprotection against the effects of both UVB and UVA light. A review of 19 human and 6 basic scientific studies showed that “Polypodium leucotomos” was well tolerated with a favorable side effect profile. Consequently, supplementation of “Polypodium leucotomos” was hypothesized as an additional photoprotection strategy. in combination with traditional UV filters, such as sunscreen.
It should be noted, however, that although no reports of toxicity have been found for this species, a certain number of ferns contain carcinogenic substances, so some caution is advisable.
Many ferns also contain thiaminase, an enzyme that deprives the body of its B vitamin complex. In small amounts, this enzyme does not harm people on an adequate diet rich in B vitamins; large quantities can cause serious health problems. The enzyme is destroyed by heat or complete drying, so cooking the plant removes the thiaminase.

Preparation Method –
Phlebodium aureum is used for medicinal purposes, especially in popular medicine in Central and South America. Here the rhizome is used for both febrifugal and sweating purposes.
A decoction is used as a remedy for coughs and kidney disorders.