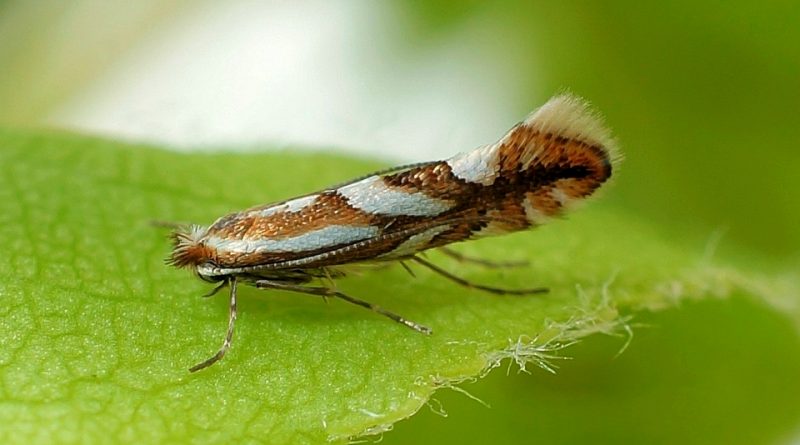 Geographical Distribution and Habitat –
The spotted tentiform leafminer is a widespread insect in much of Europe, with distribution from east to Ukraine and central Anatolia. It is also present throughout North America including Nova Scotia, Quebec, Ontario, Wisconsin and California.

Morphology –
The adults of this insect are small butterflies (5-10 mm of wingspan), with front wings of intense ocher color with oblique white silvery stripes and with edges, especially distal ones, finely fringed.
The larvae are white-yellowish; these make endophyte life and can reach a length of 4-6 mm.
The eggs, almost transparent, are laid under the leaves in plaques, difficult to identify.

Attitude and biological cycle –
The spotted tentiform leafminer is one of the leaf miners of the Melo. This moth spends the winter at the chrysalis stage, especially in the leaves infested with mines.
In the period between late March and April appear the adults that mate and lay the eggs that give rise to the first generation.
The larvae of this generation and their mines appear between the end of April and the first half of May; the adults of this generation flicker towards the second decade of June.
These give rise to the second larval generation that will give rise to new adults in the period of late July; from these the larvae of the third generation will be born in the period of August, which will flicker at the end of the same month, and from this will thus be the fourth generation at the end of the summer; from this we will have the wintering chrysalises.
The Phyllonorycter blancardella is a hyper metabolite insect for which it presents two types of larvae: larvae of the 1st type with an expanded, triangular and apode head; 2nd type larvae with legs and pseudozampe and eruciform body.
The Phyllonorycter blancardella is a leaf miner that causes damage to the leaves where the Litocollete digs characteristic tunnels, called pticonomi.
In correspondence of these elongated galleries the leaf curls, assuming a convex appearance, towards the upper page; this phenomenon is consequent to the activity of the larva that, inside the mine, weaves a transversal silky texture between the two outer margins of the mine itself. The tension of the threads and the growth of the mesophyll cause the characteristic arching towards the upper page of the mine, with the detachment of the lower epidermis.
The trophic activity of the larvae, inside the leaf blades, is not regular, in fact they erode the palisade to areas and leave the upper epidermis; for this reason the eroded area appears transparent (whitish) compared to the contiguous ones that remain green.
Following the presence of the larvae, the mine appears as an ovoid bulge of the upper page, dotted with whitish patches and, at the mine, the lower epidermis appears raised (pticonomio). The attached leaves are slightly deformed; in the case of heavy infestations, but rarer, phylloptosis may occur.

Ecological Role –
The Phyllonorycter blancardella is a leaf miner that attacks plants of Apple, Pear, wild shrub Rosaceae (Crataegus) and some stone fruit.
For the fight against this moth, in the event of serious infestations, for which it is necessary to intervene specifically against the Litocollete, the following methods of guided struggle must be implemented. It is therefore necessary to monitor the presence of this insect with the help of sexual traps. The traps must be placed in the orchards in the third decade of March, with a number of traps of 1-2 per hectare or per plot according to the company conditions.
A foliar sampling must be performed on this putno: the intervention threshold is very high, about 50% of infested leaves; or 2 mines per leaf with live larvae justify the intervention on the next generation (generally we intervene against the 2nd and 3rd generation). The intervention threshold is however very high; in some cases a catch of over 100 adults per week is still considered below the threshold.
It is also important to observe the presence of his natural enemies; among these we remember the Hymenoptera Braconidae of the genus Apanteles which are parasitoids of the larvae, inside the mines.