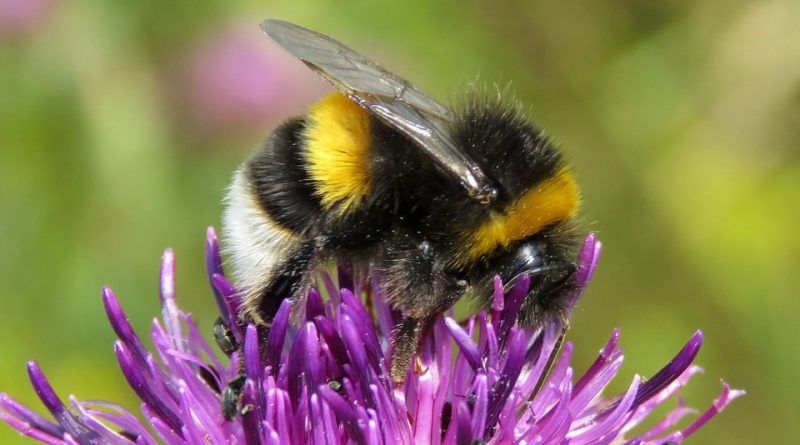 The terrestrial bumblebee, also known as a bumble bee (Bombus terrestris (Linnaeus, 1758)) is a hymenopteran belonging to the Apidi family.

Geographical Distribution and Habitat –
The terrestrial bumblebee is one of the most widespread bumblebee species in all of Europe. These insects live in open countryside and are important pollinators of many flowering plants.

Morphology –
The workers of the Bombus terrestris measure 1.5–2 cm, they are recognized by the white color of the last segment of the abdomen, which in the queen, which is larger and measures 2–2.7 cm, is instead yellow orange; the body is stocky and hairy and the presence of thick hair allows it to carry large quantities of pollen. Of the 3 pairs of legs, the front ones have a more aerodynamic shape and are suitable for reducing air resistance.
The terrestrial bumblebee is a very mild insect that only stings if threatened or forced.

Attitude and biological cycle –
The annual cycle of terrestrial bumblebees begins with the end of the hibernation of the queen that occurs at the beginning of the year, however in areas where winter is milder, these instead of remaining hibernated continue to feed on flowers present like those of ‘ivy.
The queen makes the nest, often in underground holes, like abandoned rodent burrows, on a background soft with moss, dry leaves, herbs, which she prepares, where she lays some eggs in a wax cell, leaving you, for nourishment of larvae, nectar and pollen; the larvae complete the development in ten to fifteen days, and after about another fifteen days, adult insects emerge from the nest: sterile females, which will help the queen in collecting pollen and nectar, and in preparing new cells.
The males, who reach sexual maturity within a few weeks, are born in the late summer period together with the new queens; these later leave the colony to mate, to die shortly after. In the same period instead the young queens find a place to hibernate or spend the winter, in mild areas, feeding.
On average, a queen’s life can reach a year while the workers live a few weeks.
On average, a colony can reach a number of individuals ranging from 60 to over 200.
The bumblebees feed on nectar and pollen taken from the flowers.

Ecological Role –
The Bombus terrestris, often also called generically bumble bee, is a pronube insect very useful for the pollination of plants, both of herbaceous and shrubby and arboreal species. For this reason, due to their high efficiency as foragers, they can be used for pollination of important agricultural crops. The bumble bees population is kept at bay, or threatened, by some ecological or anthropological factors.
Ecological factors include many insectivorous birds, which feed on them, as well as mice and other mammals, which damage their nests. An even greater danger derives from parasitic insects that feed on accumulated supplies, or from the same larvae.
Among the anthropological factors, which are putting the entire world population in crisis, we remember that of the destruction of its natural habitat and that of the use of pesticides which entail direct and indirect damages on this insect. Among the direct damages we obviously include that of direct deaths for the use of pesticides while among the indirect ones the confusing effect that many pesticides entail on Bombus terrestris, as on other bumblebees, reducing its ability to memorize paths between flowers and nest with decrease and collapse of the colonies due to malnutrition.
Other damages can be had, also because of the climatic changes, for sudden decrease or elevations of the temperatures that provoke in the plant a stress for which the production of pollen ceases and, consequently, the possibility of the bug of the spoils.