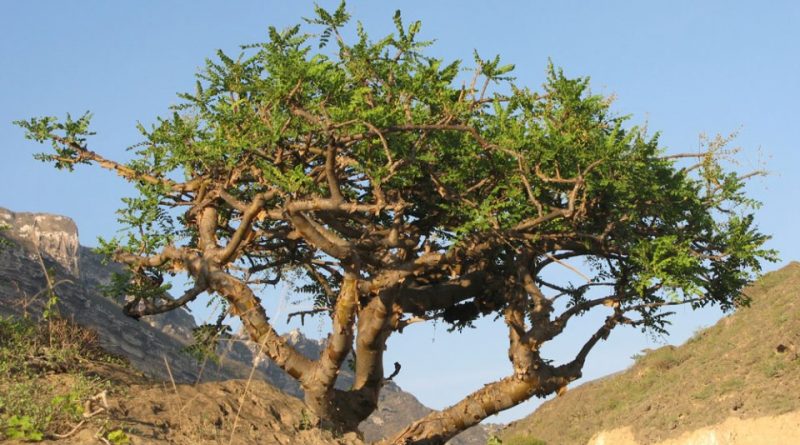 Myrrh (Commiphora myrrha Nees, 1883) is a shrub species belonging to the Burseraceae family.

Geographic Distribution and Habitat –
Myrrh is a shrub or small tree native to the Arabian Peninsula (Oman, Yemen) and Africa (Djibouti, Ethiopia, Somalia, northeastern Kenya).
Its habitat is that of the desert bush formations at an altitude of 250-1300 m, with a rainfall of 230-300 mm, mainly in areas with calcareous soil. 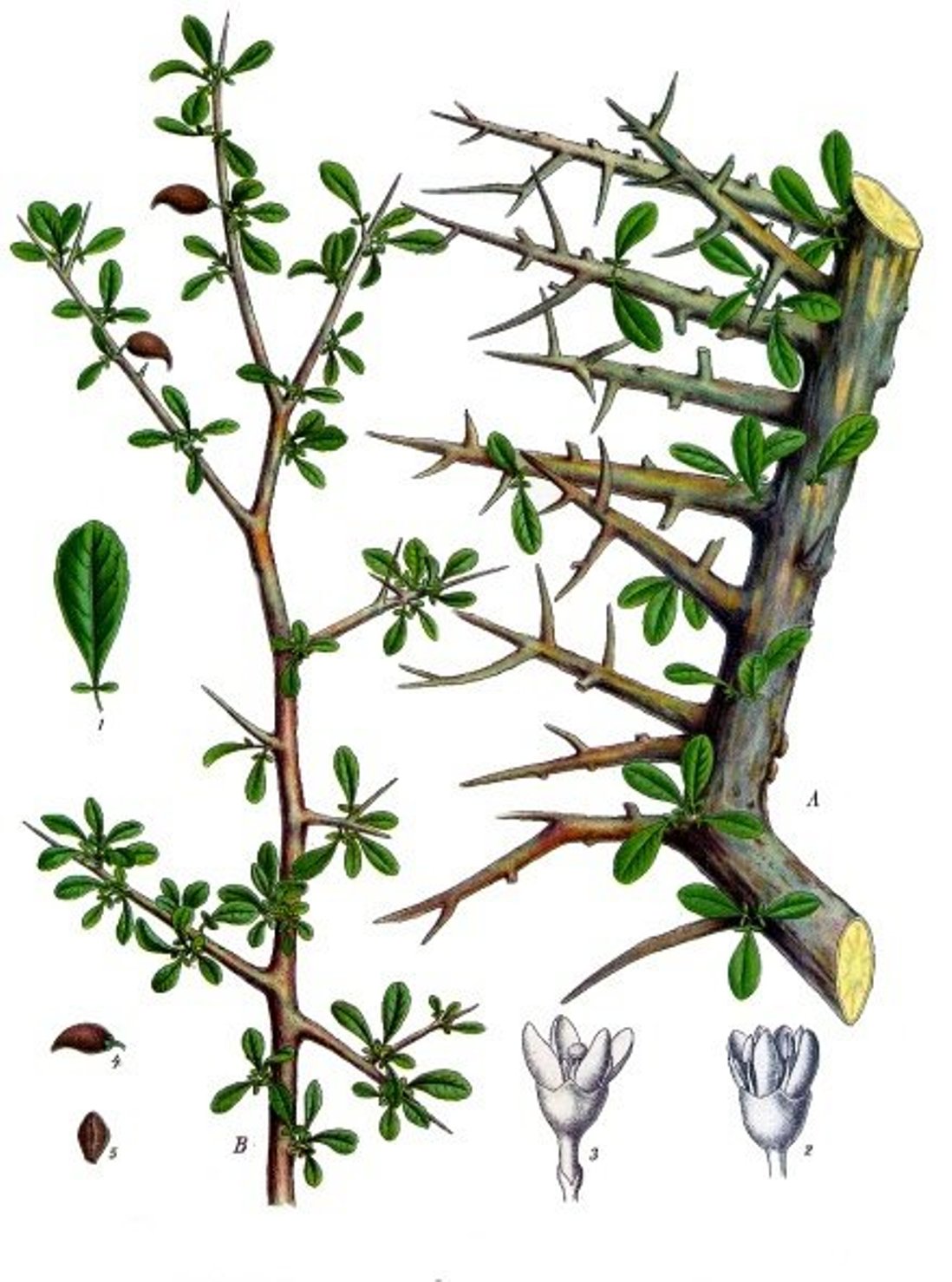 Description –
Commiphora myrrha is a plant that assumes the conformation of a shrub or small tree that grows to a height of about 4 – 5 m and a width of 1.5 m.
The leaves are oblong to oval and have 3 leaflets per leaf. Each leaflet is approximately 1cm long.
The flowers have four yellow-red petals and oval strokes.
The bark produces a fragrant resin.

Cultivation –
Myrrh is a plant that grows spontaneously in the drier and subtropical tropics, where it can be found at altitudes between 250 and 1,300 meters.
This plant is resistant to drought and frost. It propagates by seeds or cuttings. Plants prefer a minimum temperature that does not drop below about 10 ° C. [238
For cultivation it requires well-drained soil with a position in full sun and, moreover, it prefers shallow soils and is mainly found on limestone.

Customs and Traditions –
Commiphora myrrha is one of the oldest recorded medicines, having been used extensively in ancient Egypt. It is famous for being one of the gifts that the three Magi brought to the baby Jesus; today it is often used in modern herbal medicine. Myrrh is usually not grown, most are harvested in the wild.
From the bark of this plant, like other members of the genus Commiphora, exudes a fragrant oleoresin gum, similar to balsam, which is used to flavor fir desserts, baked goods, drinks, chewing gum and desserts. It is also used in perfumery and as incense. The resin promotes healing and relieves spasms, inflammation and digestive disorders. When taken internally, it treats dyspepsia, ear infections, tonsillitis, fever, etc. From the resin an essential oil is produced which is used for the treatment of skin and mouth problems. The plant is used externally for wounds, boils and mouth ulcers, and added to oral preparations.
The resin obtained from the bark of myrrh is a pungent, astringent, strongly stimulating, antiseptic and expectorant aromatic herb.
It is particularly associated with women’s health and purification rituals.
In addition, the slight astringency makes it a useful treatment for acne, boils and mild inflammatory skin problems.
The oil is intense amber in color with a warm, spicy, bitter and smoky aroma.
The constituents present in the plant are: volatile oil (erabolene, cadinene, elemol, eugenol, cuminaldehyde, numerous furan sesquiterpenes), resins (commiphoric acids, commiforinic acids, eraboresene, erabolmirroli, commiferina), gums, sterols, tannins.
Due to the presence of these substances, the best applications of myrrh include use for gargling, steam inhalation and shower.
As for toxicity, at high doses, myrrh causes increased pulse, increased temperature, heartburn, diaphoresis, vomiting and purgation.
It can also interfere with the absorption of many lipophilic drugs.
Other uses see this plant used in agroforestry uses, as it is an important species that protects the soil in areas subject to wind erosion.

Preparation Method –
The resin is collected from the cut branches and dried into a solid, which can be distilled to oil, ground into a powder for tablets or dissolved into tinctures.
It tastes and smells aromatic, but can be acrid and bitter. It is flammable, but it burns weakly and is used for perfumery and as incense during religious ceremonies. It was also originally used in embalming.