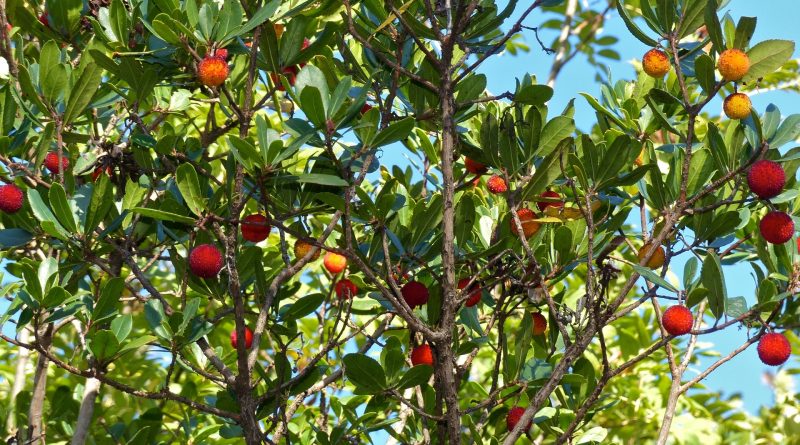 The arbutus (Arbutus unedo L., 1753), also known as albatross, is a bushy or small tree plant long enough to become secular and belonging to the Ericaceae family.

Systematic –
From a systematic point of view, the corbezzolo belongs to the Eukaryota Domain, the Kingdom Plantae, the Tracheobionta Substitution, the Magnoliophyta Division, the Magnoliopsida Class, the Ericales Order, the Ericaceae Family, the Arbutoideae Subfamily, and then the Arbutus Genus and Species A. unedo.

Etymology –
The term corbezzolo derives from the vulgar Latin * corbitjus, intersected by the mediterranean lemma (preindoeuropean) corba survived in northern Italy. This name comes in turn from the Greek name of the bush (κόμαρος – pron. Kòmaros) and from this many dialectical names of the plant (Marche, Calabria, Apulia, Campania), and also the name of Monte Cònero, headland on whose northern slopes The city of Ancona rises, and its vegetation is rich in rowan plants.
The epithet of this genus comes from the Latin arbuteus, derived from arbutus, also a lemma of Mediterranean origin (Preindoeuropeo). The origin of the species’s name, unedi, derives from Pliny the Elder who, in contrast to the appreciation that generally obtains the flavor of the fruit, claimed that it was insipid and that therefore after having eaten one (unum = one and edo = Eat) did not want to eat more.

Geographic Distribution and Habitat –
The beetle is a characteristic feature of Mediterranean scrub, where it forms pure complexes or lives in consortium with other thermophilic elements, as well as in stains at Mirto, Alloro, Leccio, Lentisco and Sughera; Its area runs from the Iberian Peninsula and from Africa to the Black Sea. It is spread in the western Mediterranean countries and reaches the southern coasts of Ireland.
It finds an optimal habitat in the woods, rocky places, walks and garlands, which in interglacial times colonized to distant areas from the present spreading area, so that today it is possible to find the Arbutus unedo in France on the Atlantic coast in south- West and in Italy in the Adige valley and on the Euganean hills, areas that have remained as wrecks. It prefers siliceous and vegetal soils at altitudes between 0 and 800 meters. The dumbbell is a xerophilic plant. 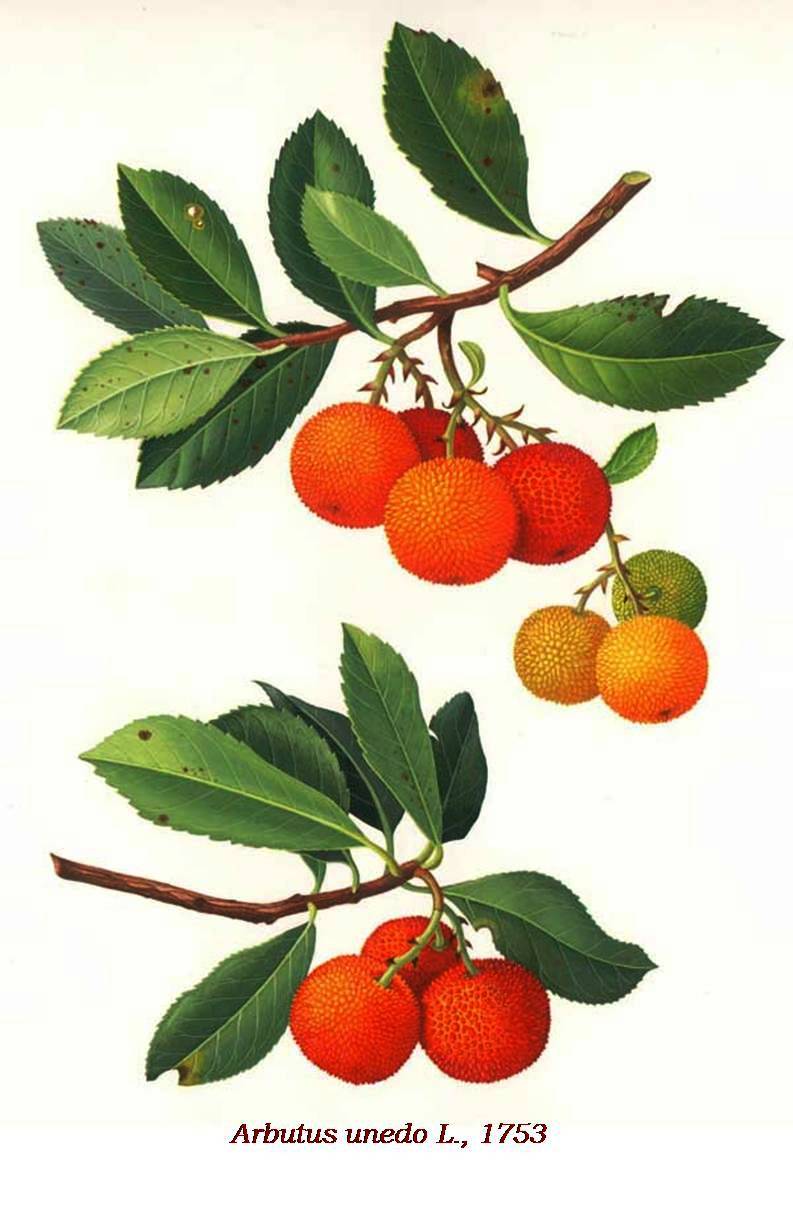 Description –
The Corbezzolo is a very branched evergreen shrub with reddish-reddish branches. It can reach a height of 1 to 8 meters. The leaves have the typical characteristics of sclerophilic plants. They have oval shaped lanceolate, they are 2-4 centimeters wide and 10-12 centimeters long with dented margin. They are thickened at the apex of the branches and have a short petiole. The foil is crunchy and is shiny and dark-green in the upper, while the bottom is clearer.
The flowers of this plant are clustered in pendants that can contain up to 20. The corolla is white-yellowish or pinkish, embossed and with 5 small teeth folded outwards wide 5-8mm and long 6-10 mm. The anthers are of deep dark red color with two yellow croissants. Are rich in nectar, and for this reason they are intensely visited by bees, especially when climatic conditions, during flowering allow it. For this reason, from an ecological point of view, the dumpling has a fundamental role since its flowers are the last honey of the season, precious for its particular taste, bitter and aromatic. This honey is also valuable because not always the bees are still active at the time of flowering, and not all the years it is possible to produce it, as the flowering occurs between October and November.
The fruit of the Arbutus unedo is a spherical berry of about two centimeters, fleshy and red at maturity, covered with tubercles quite rigid thick a few millimeters with u flavor between the acidity and sweetness also depending on their maturation status. Their maturation takes place between October and December, the following year with respect to the flowering that gives them origin. Since fruits have a scalar maturation, mature and lighter berries can be present on the same shrub. In fact, the same shrub can simultaneously accommodate flowers and ripe fruits beside the leaves because it is evergreen, which makes it particularly ornamental, for the presence on the tree of three lively colors: the fruit red, the white flowers and the leaves green .
Particularly interesting is the use of birch wood as it is an excellent home heating fuel and particularly valuable in use for roasts thanks to its aromatic characteristics. The bush is a very robust and heavy wood; After about 60 days of cutting can lose up to 40% of its weight.

Methods of Preparation –
The corbezzolo possesses many therapeutic properties, so that the Latins used to attribute magical powers to its fruits. As mentioned, they contain many tannins: as a valid urinary antiseptic, you can easily prepare an infuser of corbezzolo using about 6-7 grams of corbezzolo leaves for each cup of water, leaving them infused for 15 minutes. The inflorescence infusion will help you fight cystitis and inflammation of the bladder.
In the kitchen you can prepare a very tempting variant of the usual vinegar. To make marjoram vinegar, a handful of ripe ripe berries, 6 bay leaves and a liter of vinegar are enough: put laurel and berry in a bottle, add vinegar, carefully close the bottle and let the mixture rest in a Cool and dry place in the dark for about three weeks. The bushes will mature inside the bottle by reaching the red color that distinguishes them: you can use the vinegar to the dumplings to season salads of special taste or give it to friends, who will certainly appreciate the delicate gift of this rare fruit.
Garlic Jam is a delight for gourmet chefs who appreciate it: the crab is usually not found in the supermarket or in the market benches. You could have a tree in the garden or find these red fruits, now rare, wandering through the countryside. After collecting them, wash the needles and put them in a pot and cover them with cold water. Let them boil for about 20 minutes, then crush them by pressing a spoon on a tea strainer to separate the seeds and the pulp. Once the pulp is obtained (about 500 grams), add 140 grams of cane sugar (which should be less than one third compared to the weight of the crab) and the juice of half a lemon squeezed: boil in a boiled pot. Remember, it takes ten minutes to cook! Then just have to set up the table and invite your friends for a tea with jumbo jam.
Another preparation may be that of the deciduous bush that can be used as a tonic. The leaf infusion, in addition to being excellent against urinary tract infections, kidneys, fever and diarrhea, is astringent. You can dry and store the leaves of dandelion, to be left in cans, ready to use. And remember that the decoction of the rootstock root according to some studies is a valid ally in the care of artesclerosis.
In addition to fresh consumption, the dumplings can also be used to prepare different recipes such as pastry and jam.
The past of crabs consists in making a puree with or without sugar addition. The process for realization is very simple, you get a crusher or a passe and work the fruits that need to be well washed before. The past can be used for the preparation of sweets or consumed with the addition of sugar or lemon.
The juniper jam is made by creating a puree as for the past. The necessary ingredients are: Cucumber, sugar and lemon.
After making the puree add half the sugar by weight and a lemon for every kg of past, blend well and bring to a boil. If necessary add additional sugar. Once boiling, you can invade and then, sealed the cans, immerse them in lukewarm water and boil for 30 minutes.

Sources
– Wikipedia, the free encyclopedia.
– Treben M., 2000. The Health of the Lord’s Pharmacy, Tips and Experiences with Medicinal Herbs, Ennsthaler Publisher
– Pignatti S., 1982. Flora d’Italia, Edagricole, Bologna.
– Conti F., Abbate G., Alessandrini A., Blasi C. (eds.), 2005. An annotated checklist of the Italian vascular flora, Palombi Editore.
Attention: Pharmaceutical applications and surgical uses are indicated for information purposes only; they do not represent any prescription of a medical type; Therefore, no responsibility for their use for any curative, aesthetic or food use is considered.