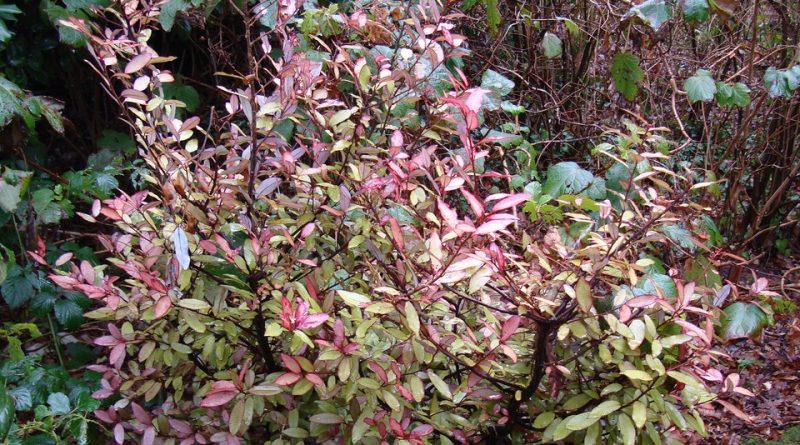 The mountain horopito or pepper tree (Pseudowintera colored (Raoul) Dandy) is a shrub species belonging to the Winteraceae family.

Etymology –
The term Pseudowintera comes from the Latin word pseudo, which in turn comes from the Greek pseydès “false” and from Wintera which is a related genus.
The specific colored epithet comes from color color: that is, a plant characterized by bright colors.

Geographic Distribution and Habitat –
The Pseudowintera colorata is an endemic plant of New Zealand, present in the various islands that compose it. It is distributed within lowland forests to the highest montane forests from 36 ° 30 ‘south to Stewart / Rakiura Island. A characteristic plant association for P. colored is found within Westland forests, where undergrowth plants such as Rumohra adiantiformis, Ascarina lucida, Pseudopanax colensoi, Pseudopanax edgerleyi and Blechnum discolor are found.
Its habitat is that which goes from the plain to the highest mountain forest, often in secondary vegetation and which tends to form secondary woods after the destruction of the forest in non-calcareous soils. 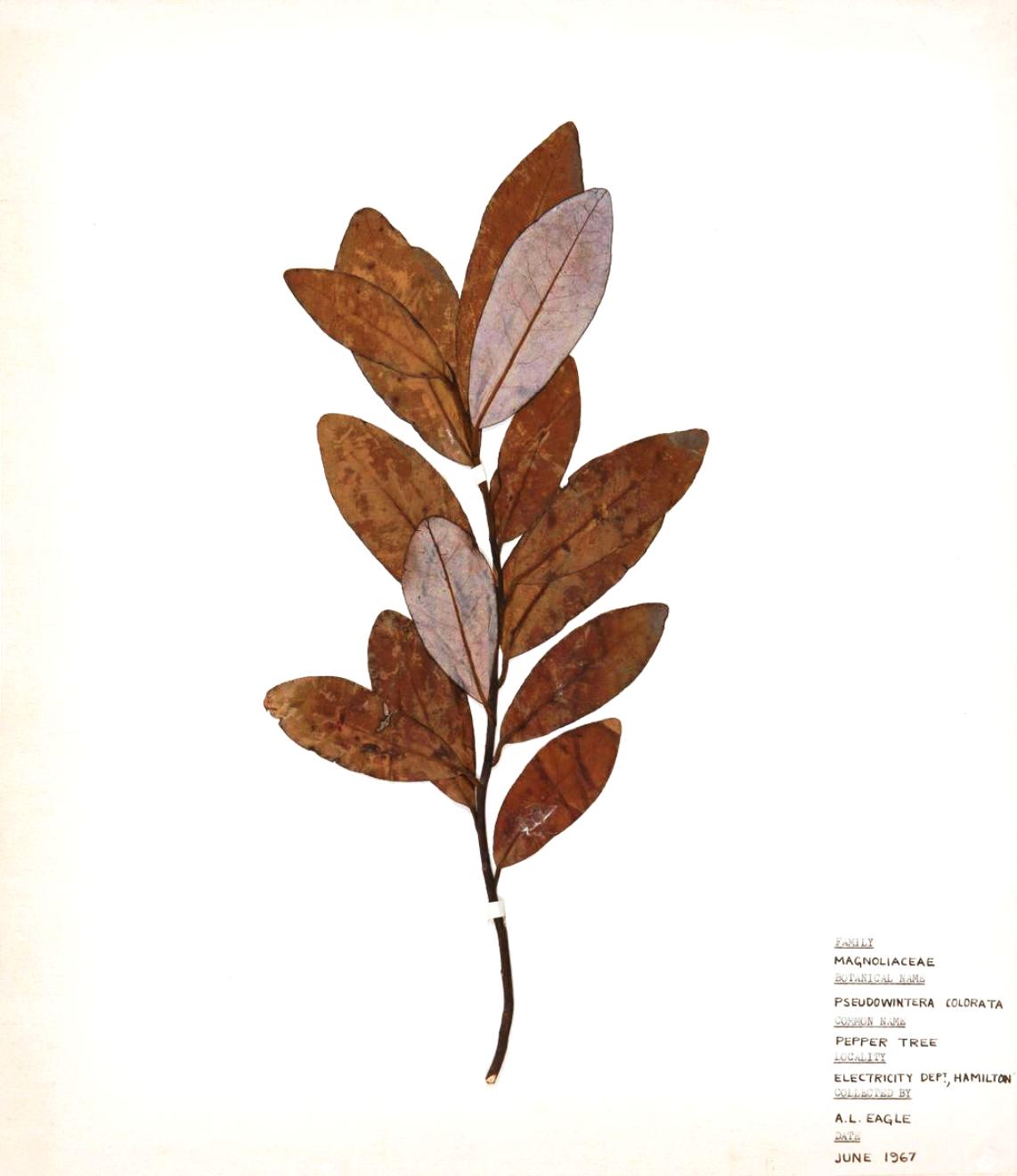 Description –
The Pseudowintera colorata is an upright evergreen shrub or small tree (1–2.5 m).
Its leaves are yellowish-green, spotted with red, with new leaves in the spring bright red.
Its flowers come out directly from the older stems rather than between the leaves. It is a very slow growing plant that lacks the specialized water conducting tubes found in almost all other flowering plants.
It is a plant that in order to defend itself from various parasites and insects, typical of the humid areas where it has evolved, has developed efficient integrated defense mechanisms. Consequently, it possesses a rich source of secondary metabolites which have an interesting range of biologically active properties.

Cultivation –
Pseudowintera colorata is a plant that is used in its natural state for local and commercial use as a medicine and for use in commercial cosmetic preparations.
This plant is also grown as an ornamental in gardens, especially appreciated for its beautiful evergreen foliage.
It is a plant with little resistance to cold, able to tolerate short periods with temperatures down to about -8 ° C when it is completely dormant.
It prefers a cool, moist location in well-drained but moisture-retaining organic soil and does not like alkaline soils.
It can also be grown in both full sun and partial shade.
Propagation occurs by seed which can be sown either immediately after ripening or even in spring.
If sown in seedbeds, the seedlings must be transplanted in late spring or early summer, after the last foreseen frosts. If these are grown in colder climates, the young seedlings must be sheltered from frost at least for their first winter.
The plant can also be propagated through cuttings in the summer.

Customs and Traditions –
The Pseudowintera colorata is a plant that like all Winteraceae is quite primitive, reflecting its origin among the first flowering plants. In New Zealand, this plant appears in the fossil record over 65 million years old.
It is called, in its areas of origin, pepperwood or mountain horopito because its leaves have a spicy flavor.
For this reason it is also cultivated as a spice, as an ornamental plant and as a traditional medicinal plant.
Pseudowintera colorata has long been used by the indigenous Maori people of New Zealand for both internal and external uses in traditional medicine and for many purposes. Already in 1848 it was documented in the treatment of skin diseases such as ringworm, or venereal diseases. “The leaves and tender branches of this shrub are bruised and soaked in water, and the lotion used for ringworm; or the bruised leaves are used as a poultice to rub the skin, or to heal wounds, bruises or cuts.”
Infection due to Candida albicans (Maori – Haha, Haka) is documented as a leading cause of death of Maori children, due to their “unsatisfactory diet”.
The juice of its leaves was put directly into the mouth, or alternatively the leaves were immersed in water to extract the juice and this decoction aimed to treat what we now call candidiasis.
The first European settlers in New Zealand also used it for medicinal purposes. For internal use, the leaves were chewed or prepared as a tea. “The leaves and bark are aromatic and pungent; the former are occasionally used by colonists suffering from diarrheal disorders.”
A decoction of the leaves was taken for stomach pain and was known as a “Maori Pain Relief” and “Bushman’s Pain Relief”.
There are reports of the use of bark in the 19th century as a substitute for quinine: “Its stimulating tonic and astringent properties are slightly inferior to winter bark.”
A French nun, Mother Aubert, went to live among the Maori in the late 19th century, and the native herbal remedies she later created became commercially available and widely used throughout the New Zealand colony.
The colored Pseudowintera was one of two ingredients in her patented medicine, Karana. In a letter to the Consul of France dated 2 December 1890 he described it as “superior to Quinquina [quinine] in the treatment of chronic stomach pain. It has been very useful to me in cases of weakness anemia, continuous diarrhea …. and in recovery from temperatures “.
The plant is aromatic and feels hot and stinging when chewed and tends to be ignored by most herbivores.
This species hybridizes with Pseudowintera axillaris where the two species are present in the same habitat.
Furthermore, both the Pseudowintera colorata and the Pseudowintera axillaris were probably used interchangeably for medicinal purposes by the Maori.
As regards its biochemical composition, the main biologically active chemical component isolated from the leaves of P. colored is the polygodial. The leaf of this chewed plant has a characteristic spicy taste and this is mainly due to the polygodial which confers spiciness on the tongue in concentrations up to 0.1 µg.
An ex vivo study used a mixture of this plant and anise (Kolorex) to inhibit the growth of C. albicans in the oral cavity. This research concluded that the antifungal action of Kolorex was constant against all species tested (including C. albicans, C. tropicalis, C. glabrata, C. guilermonii, C. parapsilosis and C. krusei) with minimal inhibitory concentration of 1:20 (diluted with sterilized distilled water) of Kolorex.
Another study concluded that a mixture of this plant (containing polygodial) and aniseed (containing anethole) protects the intestines of mice from colonization and spread of Candida albicans. After the mice were inoculated with C. albicans and treated with Kolorex, tests on intestinal samples showed that the mice treated with Kolorex had a very low concentration of C. albicans per gram of tissue. The data suggested that P. colored extracts and the aniseed product could exert an early competitive effect against colonization.

Preparation Method –
The Pseudowintera colorata is a plant that is mainly used for medicinal purposes.
An infusion of leaves has been used as a treatment for chest ailments. One tablespoon of the mixture is difficult to swallow, leaving a burning sensation in the throat and chest.
The decoction of the leaves is called “bushman pain reliever”.
The leaves are chewed to relieve toothache.
The leaves are pounded and immersed in water; the decoction is applied externally to cure skin problems.
The decoction is also applied to the breasts of mothers who wean their babies; the bitter taste dissuades the baby from breastfeeding.
The decoction of aromatic bark is anodyne, aromatic, astringent, tonic and has been used as a substitute for quinine.
Parts of the plant (unspecified) were occasionally used by settlers suffering from diarrhea.
The sap of the plant is traditionally used in the treatment of stomach pain and has excellent astringent and stimulating properties; anti-grumpy.
It has been shown that a decoction of the leaves strongly desensitizes man to the sensations of sweet and possibly also bitter taste, without affecting the sensitivity to salty and acidic properties.
Among other uses, the extract of the leaves is used as an ingredient in commercial cosmetic preparations as an antimicrobial.
The extract of the leaves and flowers is used as an ingredient in commercial cosmetic preparations as a conditioner for the skin.