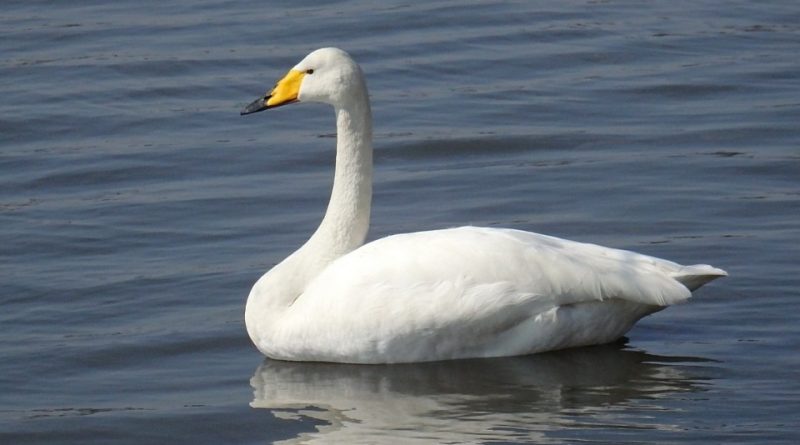 The Whooper Swan (Cygnus cygnus Linnaeus, 1758) is a bird belonging to the Anatidae family.

Geographical Distribution and Habitat –
The Whooper Swan is a migratory species, as it spends the summer period in Northern Europe and Asia (it reproduces above the 55th parallel) and the coldest periods on the coasts of southern Europe, in North Africa, Japan and China. In Italy it arrives only sporadically.
This water bird nests in Northern Europe especially in Scandinavia and in the tundra.
It is a bird of cold climates (from Siberia to Iceland), very frequent in Finland, it prefers brackish coastal waters. 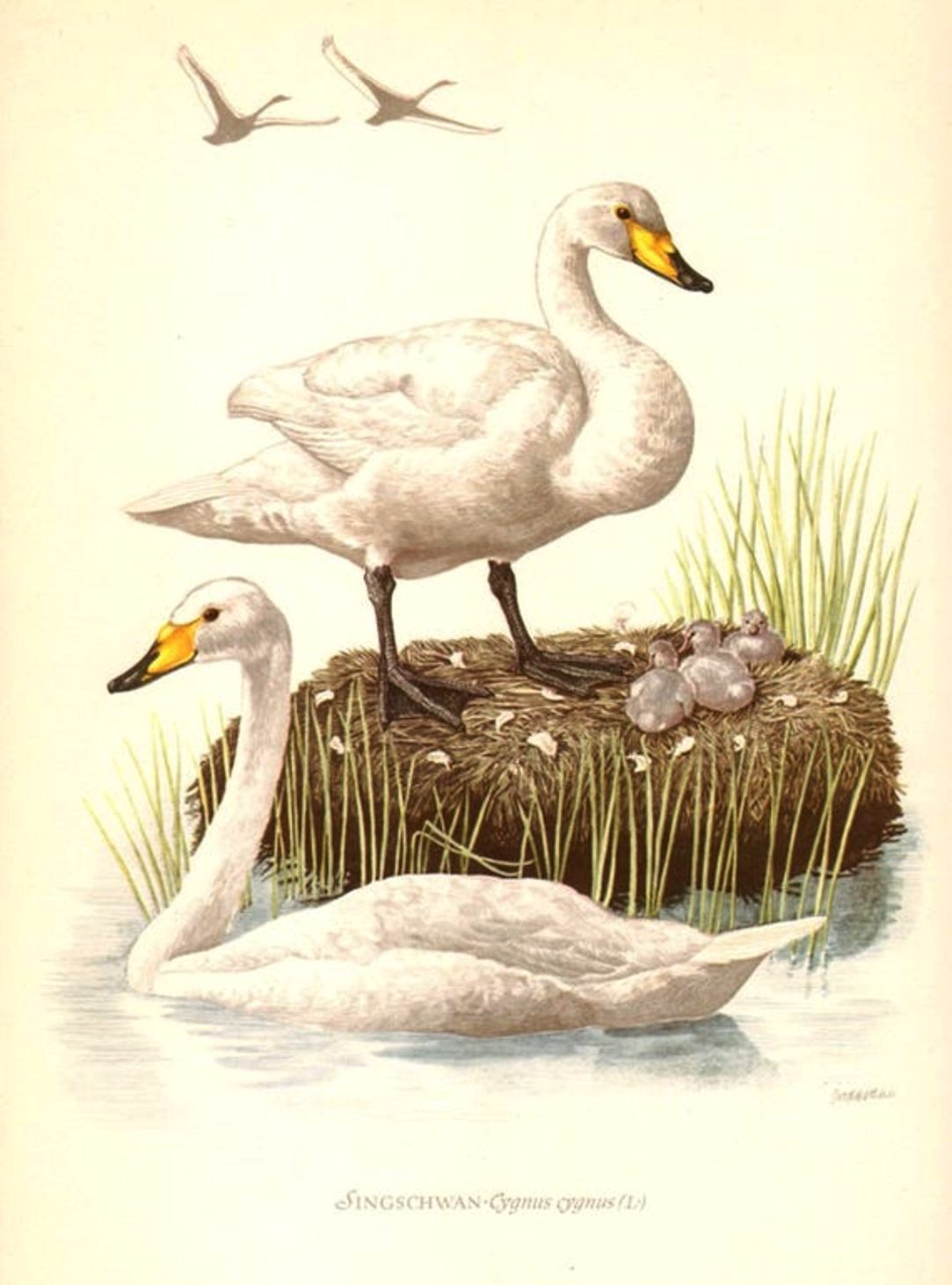 Description –
The Whooper Swan is a large bird with a wingspan of 205-235 cm, a length of 150 cm for the male and 150 cm for the female with a
Height of about 75 cm for a weight that varies between 3 and 12 kg.
It is also recognized for having the yellow beak with the black tip, with the adults having completely white plumage, and short webbed legs of dark color.
The young, until the end of the first winter, instead have gray plumage and their beak is pink where it will turn black, and whitish where it will turn yellow.
The characters that distinguish it from the Mute Swan are due to the absence of the bump above the beak, it has a much quieter flapping of wings during the flight, and has, as mentioned, the yellow and black beak instead of orange-red and black; it also keeps the neck straighter.
Among other things, the wild swan stands out from the real especially because it never lifts the thick plumage of the wings as it glides silently over the water, in the plastic and classic “swan pose”: in fact, it always wears lowered wings like wild ducks and this makes it less imposing than the real, despite having the same dimensions.

Biology –
Cygnus cygnus is a monogamous species that nests in areas of Northern Europe, where it nests in islets of marshy areas, in lake basins, in peat bogs and in the tundra.
For each brood, the female lays 4 to 7 whitish colored eggs, 11.2 x 7.0 cm in size, which hatch after 4-6 weeks of incubation.
Nesting occurs in isolated pairs

Ecological role –
The Whooper Swan, known more rarely known as “singing swan” or “musical swan”, is a very noisy bird: when excited, it emits a curious sound similar to a cough or a trumpet.
It is a gregarious species that flies in groups in typical V-formations or in swaying oblique lines.
As for its diet, as for the other swan species, it is essentially herbivorous; it feeds mainly on aquatic and marsh plants, which tear from the bottom or from the banks with its beak, through the long neck; in fact, depending on the species and age, they can feed by immersing the head up to a maximum depth of about 80 centimeters; sometimes they reach greater depths by immersing the front part of the body, while the rear part is elevated out – thus verticalizing the whole body upside down – using the legs to give impetus to get to this position and at the same time keep in balance in that position.
In search of food, however, it can also walk on land along the banks, thus feeding on herbs, leaves and seeds. However, they avoid going very far from the water.
As adults they can eat up to 3.5 – 4 kg (wet weight) of aquatic vegetation per day; to aid digestion, they sometimes ingest small quantities of sand, which in their intestine facilitates shredding. The diet is not strictly vegetarian: in fact, together with the herbs, they also swallow a good number of small aquatic animals associated with them (crustaceans, insect larvae and small snails).
Although moderately moderate in food intake, on contact with man and especially when young they are very fond of bread – always fresh, softened in water and in small bites – tending according to some scholars to nourish themselves beyond measure, with particular damage for the small swans, which risk becoming too large compared to the reach of the legs still in development, as well as favoring a dangerous growth in the wrong direction of part of the plumage, similarly still in formation; in this regard, white bread is considered particularly harmful, in its place wholemeal bread or wholemeal crumbled / chopped croutons in water is relatively preferable.
The possible harmfulness of bread as nourishment for swans is a matter of debate, although supporters of the traditional custom say that any problems are caused only by an excessive quantity or if bread was the main source of their nutrition – since swans, once satisfied, they stop feeding; the damage would be such and above all serious if they were given moldy bread instead of fresh or in any case edible by man too: particular danger to the health and life of swans is in fact represented by stale and moldy bread, since mold is poisonous to them.
According to the IUCN, this species is still at Least Concern (LC) level, therefore with minimal concern for danger.