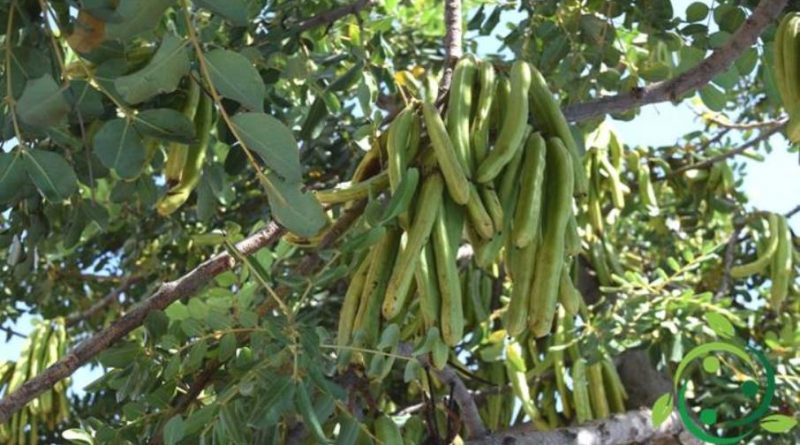 The carob tree (Ceratonia siliqua L., 1753) is a fruit tree belonging to the Fabaceae family. In this sheet we will see how to grow the carob, taking into account its climatic and pedological attitudes.
Cultivation of the carob, which is lost in the night of the times, is particularly popular in North Africa, Greece and Cyprus and, with lesser extension, in Spain, southern Italy and Albania. In Italy we find it above all in Sicily, although the economic relevance of this production is unfortunately in decline. Still there are still important carobas in Ragusan and Syracusan; Some industries are still active in these areas, which transform the carob middle grain into semi-finished products used in the confectionery and food industry. With its cultivation, the province of Ragusa covers about 70% of the national production.
From a farming point of view, the carob is a rustic plant, not very demanding, which grows well in arid and very calcareous soils. Its growth is slow and the species is very long.
It grows lush where there is the same citrus climate even though adult plants are more resistant to the orange and lemon chill, and can survive at -4 below zero for short periods.
As for the soil, it is an adaptable plant that grows well in different types of soil, both sandy and rocky soils and also in heavily calcareous soils.
What you can not bear is water stagnations that make its radical structure rot that is not damaged by an arid soil because it can go deep in search of water.
The caraboo endures drought and is not damaged even if it is necessary to water the young plants and it is advisable to give water to the adult plants if you want to increase fruit production. His rusticity also manifests itself in terms of fertilization.
In fact it is not necessary, for young plants it is advisable to fertilize with well-matured organic fertilizer.
In the cultivation of the carob to increase production fertilize the plants with manure and with a complete chemical fertilizer.
The pruning is reduced, only the dried, diseased branches and some inner branches are removed to give air to the hair.
The carob, as mentioned, is a goddess plant so every 20-25 female plants must plant a male plant.
Sometimes, so as not to have the male plant and so save space, some branches of male plants are grafted on the branches of female plants. This is an old practice used successfully today.
It is well known that the carob has a very slow growth and that for this reason it comes into production late. This slowness is due to many factors, the slow growth of the plant, its long vegetative period, its growing often without care in a marginal environment.

Propagation is carried out with seed and seed, after sprouting in spring in a protected environment, is transplanted when young seedlings have issued the second set of leaves. Fresh seeds have a high percentage of germination, while dry ones need to be bathed about 24 hours before sowing, until they reach twice their size in order to germinate.
If the plant grows untreated in marginal areas before it grows from 6 to 8 years old, and where the conditions are better it starts to fruition from 4 to 5 years.
Young carob seedlings can be grafted with other varieties of carrots more qualitative but in this case fruit production is postponed to 7 or 8 years.
This plant of such slow growth and fruition rewards the bearer’s patience with abundant production that in adult plants can exceed the quintal per plant.
In addition, the carob is a long-lasting plant that goes into full production from the twentieth year of age and passes the century, always being highly productive.
This plant has been living for many centuries and there have been cases of multi-century plants in the Mediterranean area that have been reported to have exceeded the quintals of fruits in just one season.
At one time the most appreciated part of the fruit was the flesh, whereas today it is the seed that is taken more into consideration because of the very sought-after flours and gums.
Therefore in the cultivation of the carob we prefer the varieties that produce more seeds than those that have few.
An old Italian variety with straight or slightly curved pods, lighter in color than the other cultivars and with great taste is “Adele”
In Spain, another “Casuda” variety is widely cultivated, which is collected in September and has straight pods with a good taste.
For seed yield, the Italian variety “Pasta” is the best one for both the number of seeds present in each pod, about 15, and the amount and flavor of the pulp.
In Sicily there are high-quality carob crops that, starting from selected varieties, produce flour and other products known worldwide.
Harvesting the mature carrube is the most delicate and costly part of the cultivation of this plant.
When the locusts ripen, in autumn, the tree is in full bloom because it prepares for the next fruit-making that will take place the following year.
So the baiters must be skilled and skilled in handling the long perches that make it possible to drop mature carrubs without damaging the flowering on specially positional soil.
This collection method is very ancient and even if we try to obtain cultivars where it is possible to collect mechanically by shaking the branches, most of the carrube is still collected today with this ancient system.
Fresh locust beans have a moisture content ranging from 10 to 20% and must be dried in a covered, dry and ventilated place to obtain a moisture content of not more than 8% so that they do not decompose.
With further processing the pulp is separated from the seeds to which the skin and the sprout are removed.
Subsequent seed processing is expected to be reduced to a fine powder from which the carob gum is obtained.
Instead, the pulp is chopped roughly or roughly and serves to create croquettes used to feed various types of pets.
It can also be used for human consumption, in this case it is toasted and further milled to create a fine powder marketed under the name of carob dust.