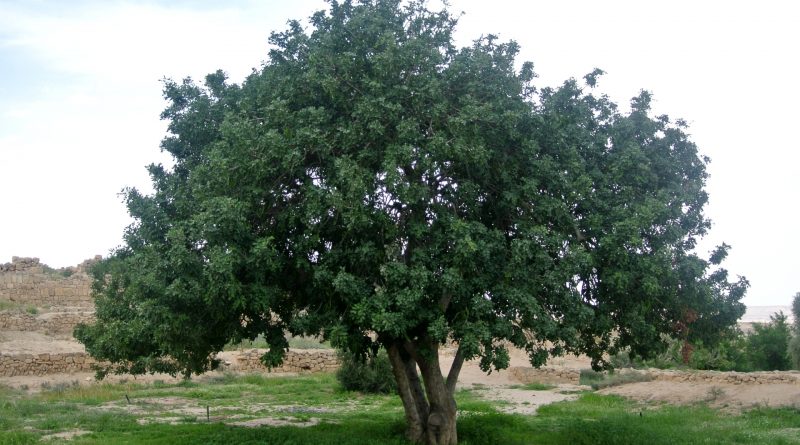 The carob (Ceratonia siliqua L., 1753) is an evergreen tree, mostly dioic (mostly with plants with only male flowers and trees with only female flowers) and rarely monophonic (with plants having flowers of both sexes). It forms Olea-ceratonion’s phytosociological association with Olea europaea.

Systematic –
From a systematic point of view Carrubo belongs to the Eukaryota Domain, the Kingdom Plantae, the Tracheobionta Subordination, the Spermatophyta Division, the Magnoliophyta Division, the Magnoliopsida Class, the Rosidae Subclass, the Fabales Order, the Fabaceae Family, the Caesalpinioideae Subfamily, the Cassieae Tribes and then the Genera Ceratonia and Species C Siliqua.

Etymology –
The name of the genus comes from the Greek “kéras” horn and “téno” I shield: horn protruded, probably in reference to the morphology and the consistency of the fruit; The specific name from the Latin “siliqua” = pod, always with reference to the fruits.
Carrubo’s common name seems to be due to the influence of the Arabs calling this “charruba” plant. In England it is named “St. John’s bread “, that is, bread of St. John, because in a passage of the Bible it is said that the saint, being in the desert, could survive nourishing locusts, which according to many would be locusts. This, as is known, is erroneous, since St. John ate the migratory locust, but the name remained.

Geographic Distribution and Habitat –
Carrubo is a spontaneous plant of the Mediterranean basin, we find it from Portugal to Morocco, in the arid areas of this region. In Italy it is spontaneous in the southern regions while it is native to Tuscany and north of this, where it is rare. The Carubbo is native to the southern basin of the eastern Mediterranean and Asia Minor; Has expanded with cultivation in all Mediterranean countries in the climaxic horizon of evergreen sclerofile, characterizing it with Olea europaea L.- Olivo, the hottest band of the Olio-Ceratonieto.
A.A. Claim that Carrubo arrived in Italy in the Middle Ages, through Spain, where he had been taken by the Arabs. Its presence in the spontaneous state, for example in Sicily, is considered to be the insolvitation of cultivated forms. According to other A.A. Has a much older history and the presence of spontaneous forms and typical plant associations with other native plants, confirm the native species of the species in southern Italy.
The habitat of this species, lucivaga and thermophilus, although not very related to the nature of the substrate, is that of lime calcareous terrain and dry stations; Spots, garlands, especially close to the coast; We can find it up to 600 m s.l.m .. 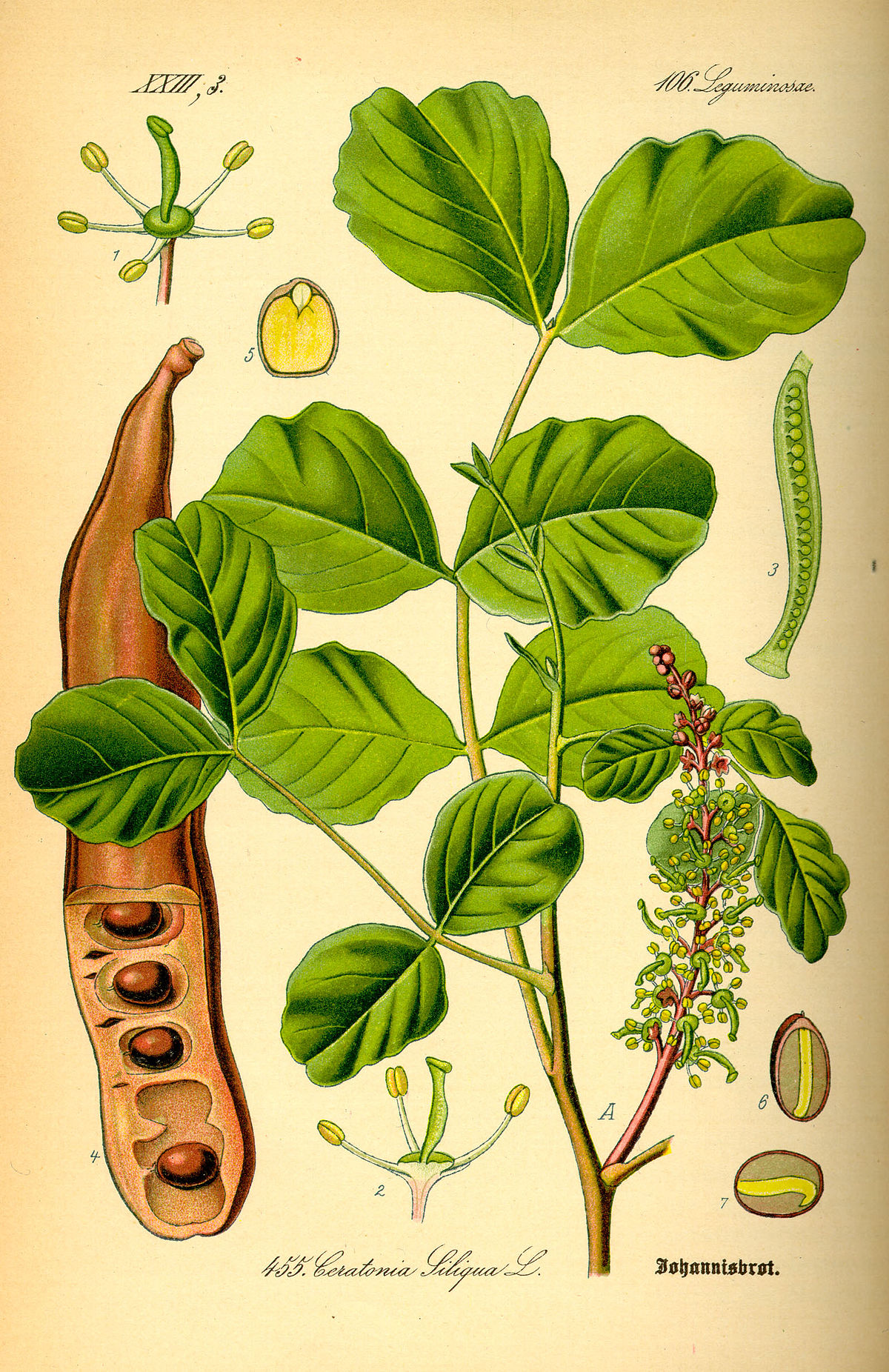 Description –
Ceratonia siliqua is an arboreal spruce tree species, branched up. Some specimens can reach a height of 10 m.
It has a vigorous stem, with a gray-brown bark, slightly cracked.
It has composed leaves, partially matched, with 2-5 pairs of robust, coriaceous, elliptical-obovate shades of dark green shining above, clearer in the lower, with full margins.
The carob flowers are fairly small, greenish, with papillary corolla; These are formed on short rays linear to the leaves of the leaves.
The fruits, called carrube or butteran, are large pods, called “lozenges” long 10 to 20 cm long, thick and pale, first of pale green color, and then dark brown maturation. These have a very hard outer surface, with fleshy, pasty and sugary pulp that hardens with the drying process. Within these, we find dark, crumpled and flattened seeds, very hard, very homogeneous in weight, called “carats” since they were used in the past as a measure of gold, since they are considered of constant weight.
Fruits are very persistent, so on the same tree there may be, at the same time, “dried” fruits of brown color and immature fruits of green color.

Cultivation –
For the cultivation technique consult the present sheet.

Preparation Method –
As for human nutrition, carob gum is used in the confectionery industry and in the food industry.
This ingredient, labeled with the E410, has the ability to absorb liquid up to 50-100 times its weight and is therefore an excellent and natural thickener.
This type of rubber is also used in the cosmetics industry, in pharmaceuticals, in detergents, in adhesives and in the textile industry.
The sweet pulp of this fruit, known from the earliest antiquity, is nutritious enough for certain peoples to make a major part of their life once.
The fresh flesh is very pleasant and has a slightly laxative effect; Dry, on the contrary, is astringent. From the fermentation it is possible to obtain alcohol, while the seeds provide clothes and industrial use tires. In addition, animal feed is prepared with locust beans; From bark and leaves can extract tannins.
The carob not only consumes the pulp of its many fruits, even its seeds, appropriately ground, give a sweet and protein flour that is used as a thickener and as a sweetener.
The infusion derived from this fruit served in antiquity to cure many diseases, was used to calm the cough, soothe the sore throat and lighten the voice.
Of this beneficial sugar juice make use of the Arabs to refine and strengthen after the ritual fast of Ramadan.
And it is a drink easy to produce just leave the broken locusts in cold water for a few hours to get a sweet and vivifying drink.