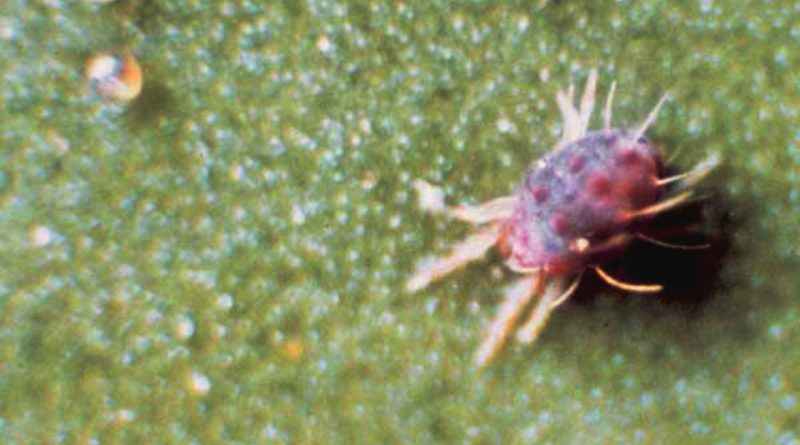 The new red spider or red citrus spider (Panonychus citri Mc Gregor, 1916) is a mite belonging to the Tetranychidae family.

Systematics –
From the systematic point of view it belongs to the Domain Eukaryota, Kingdom Animalia, Subarranean Eumetazoa, Phylum Arthropoda, Class Arachnida, Order Acarina, Family Tetranychidae and therefore to the Genus Panonychus and to the Species P. citri.

Geographic Distribution and Habitat –
The Panonychus citri is a mite that probably comes from Southeast Asia. Nowadays it is found all over the world, especially wherever Citrus plants are grown. The red mite Citrus is an economically important parasite, even if the damage it causes varies greatly between regions and seasons. In some areas it is considered a minor problem, in others a serious threat.

Morphology –
The Panonychus citri is very similar in appearance to the common red spider. The adult body is pear-shaped with a length that can vary from 0.3 to 0.5 mm; with a color that varies from dark red to purple with numerous white-pink bristles.

Attitude and biological cycle –
Panonychus citri is a mite also known by its names: in German by Rote Zitrusspinnmilbe, in French by Acarien rouge des agrumes, in Spanish by Acaro rojo de los cítricos and in Portuguese by Ácaro-purpúreo.
Each adult female lays between 20-40 eggs, 2-3 a day, for a period of 2-4 weeks, preferably along the main veins of the leaves. After a period of 1-4 weeks, the larvae hatch and spread on the plant; they begin to feed once they have evolved in the proton mica phase and within a few days become deuteronite and, eventually, adults. The larvae have only six legs, while all the other mobile phases have eight.
The nymphs of this mite, before each molt, become inactive for some time and remain anchored to the surface of the plant. During this “chrysalis” phase, the old mite cuticle separates from the new one, showing the whitish nuances of the body. Under optimal conditions (24 – 26 ° C) this phase may be less than 12 days. The development of the Panonychus citri slows down during the cold season, but does not cease completely. As soon as the conditions improve, e.g. due to the vegetative growth of plants or during a period of dry weather, the population can multiply in a few days. Adult mites can live several weeks.
For their containment it is important the presence of a balanced ecosystem with good presence of grassing and of shrub and tree species; this condition allows a notable increase of its natural enemies up to knock down the population of this mite below the threshold of damage.
The damage caused by this mite is also due to the presence of water stress in agricultural crops. An adequate water supply considerably reduces the susceptibility of trees to infestation.
The proliferation of this Acarus is also due to the use of insecticides, especially those with a broad spectrum, which by eliminating its antagonists, can aggravate the situation.

Ecological role –
Panonychus citri lives mainly at the expense of citrus fruit, which both leaves and young fruits are attacked. The adults and nymphs of the red citrus spider perforate the surface of the plant (up to 2-3 layers of depth) with their mouthparts sucking the lymph and ingesting the contents. Their favorite feeding sites are the upper sides of the young leaves, but fruits and green branches can also be attached. The resulting lesions are highlighted as small gray signs (punctuation). When their number increases, they merge into spots that give the whole aspect of the leaf or green fruit a silvery appearance. The peel of ripe oranges or lemons will turn pale yellow. With infestation consisting of the loss of photosynthetically active tissue, and especially with plants are under water stress, the collapse of the mesophyll will lead to the loss of leaves and fruits. In cases of serious infestations even whole twigs can die. The production yield can be significantly reduced as the internal quality of the remaining fruit is not negatively affected, and also results in larger size due to a thinning effect. This will only economically offset a slight loss of yield, however, if the fruits are defective, they will lose market value.
This mite was also found on papaya, strawberry, apple, peach, grapevine and others.
The spread of this small mite, as well as others of agricultural importance, is due both to insects and birds and to the tools used by farmers. Even the few spider webs that produce contribute to small movements in the plant and between plants.