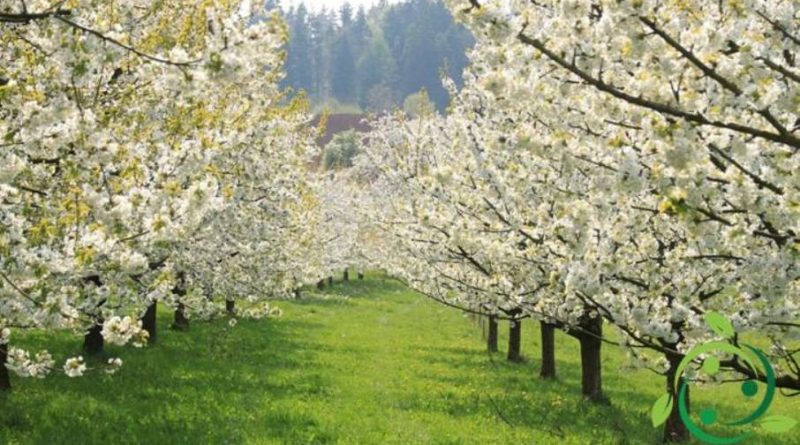 The cherry tree (Prunus avium L.) is a species belonging to the Rosaceae family, native to Europe and is a tree that, with its many varieties grown, unlike others of the same genus, does not particularly like pruning. In fact, the interventions on the aggressive or drastic branches determine a difficulty to heal by the plant that manifests itself by the emission of a gelatinous liquid that then flows on the different parts of the tree.
Pruning interventions must therefore be limited to give, in the first years of life, the aesthetically but agronomically most useful form to cultural operations. On the adult tree, on the other hand, it must be done with the limited and necessary cuts to guarantee higher productivity and better fruit quality. The true art of cherry tree pruning consists in understanding the morphological tendency of the plant, following it and operating only limited interventions. In this sheet we can see how to prune the cherry tree, considering the concept that the cherry tree could not be cut at all, if the plant develops according to a balanced shape.
We can therefore distinguish two types of pruning; that of training and that of production.

Pruning training: pruning training, or breeding, should be practiced in the first two years of tree life. In this period we work to give the plant the desired shape. Training pruning should be done between the end of spring and the beginning of summer. Especially in very young plants pruning should be done in the period with milder temperatures to facilitate the healing of wounds. The pruning of formation takes place until the fourth year of the tree’s life, since the real fruiting of production starts from the fifth year. The cuts must be made using clean and disinfected tools to ensure that the plant is not contaminated or attacked by mold that could cause the branches to rot; during the cutting operations, these must be done with an oblique angle and removing the internal branches that would make the plant slightly ventilate and those that would not guarantee an ordered scaffolding.
Production pruning: this pruning is carried out from the fifth year onwards and serves to regulate the production capacity of the plant and to eliminate damaged or shriveled branches. It can also be done in winter (between January and February), practicing the so-called dry pruning. This operation is carried out with return cuts, ie with the shortening of the branches that seem to show signs of poor production. In particularly cold areas it is better to avoid intervening in winter and, in any case, the days with frost should be excluded. The production pruning can be carried out at the limit even in summer, but in this case it is absolutely necessary to avoid the vegetative season and the periods that coincide with the development of the shoots, with the flowering and with the fructification.
Summarizing then, the pruning aims to: contain the vegetative development (especially in the species P. wild avium that tends to grow too much upwards), especially with green pruning; renew the fruiting formations that have already produced and bring light into the foliage.
One last recommendation; as cherry is very sought after by the furniture industry, both in logs and beams (style furniture and chairs), this use requires beautiful trees. In this case as, above all, the part of the trunk has the greatest use, pruning must tend, in this case, to give a greater scaffold height, privileging as commercial wood the botanical varieties, cultivated for this purpose.