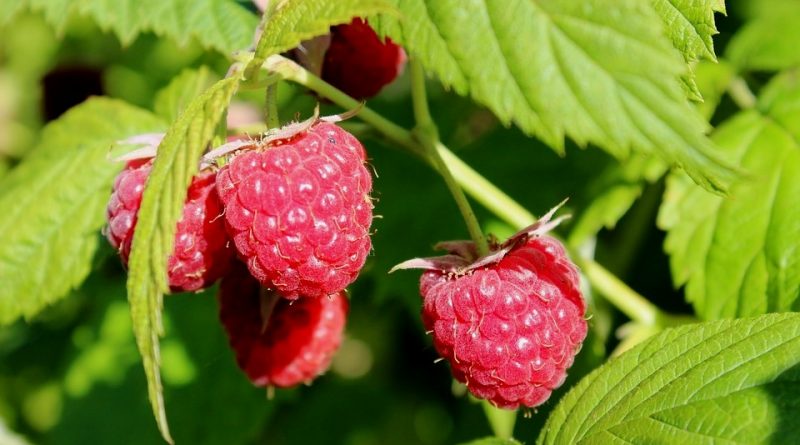 Raspberry (Rubus idaeus L., 1753) is a fruit-bearing species of the Rosaceae family.

Systematics –
From a systematic point of view it belongs to the Domain Eukaryota, Kingdom Plantae, Magnoliophyta Division, Magnoliopsida Class, Rosales Order, Family Rosaceae, Subfamily Rosoideae and then to the Genus Rubus and to the Specie R. idaeus.

Etymology –
The term Rubus derives from rúbeo, that is, being red: in reference to the color of raspberry fruits. The specific epaeeto idaeus comes from Mount Ida, near Troy, in the North East of Turkey, which according to what Dioscorides reports was particularly rich in this species.

Geographic Distribution and Habitat –
The Rubus idaeus, in the wild, grows in hilly and mountain areas of central Europe. Also in Italy it is common, from 200 to 2,000 m. s.l.m., in the clearings of the mountain woods but rarer in the South and in the Islands. It grows mainly in the open spaces inside the woods or primarily colonizes parts of the forest that have been the subject of fires or wood cutting. This plant prefers partially shady places and sub-acid and fresh soils. The raspberry is certainly native to the temperate zone of the northern hemisphere, although the identification of the specific area is more difficult. 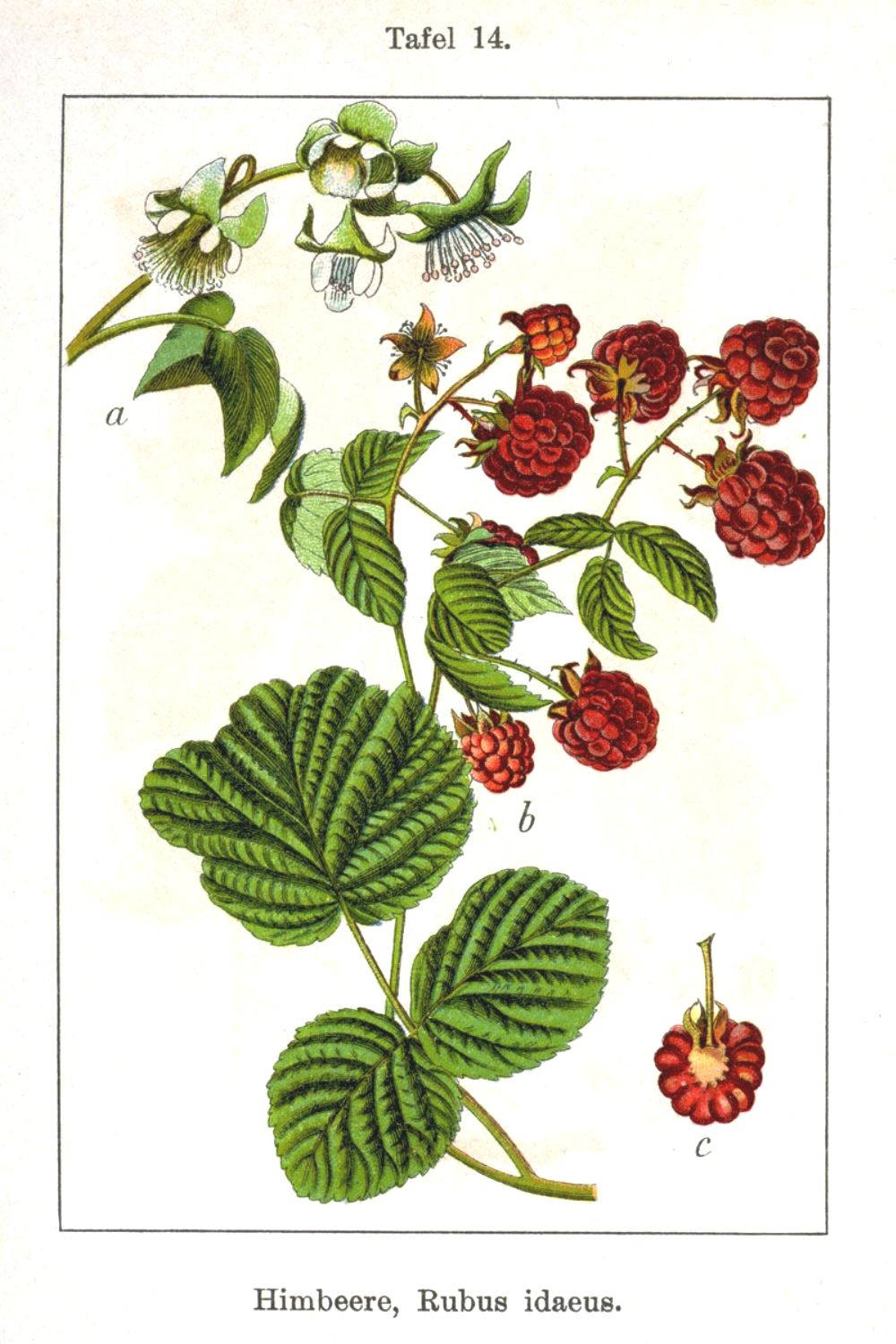 Description –
The raspberry is a shrub with creeping rhizome from which stems sub-erect, arched, cylindrical, up to 2 meters tall and of green or reddish-brown color; these are pruinose, glabrous or sometimes with simple hairs and with small quills, fine, patent or inclined, sometimes violet. The branches of the Rubus idaeus of the year are generally glabrous and herbaceous and then die the second year after fructification. The leaves are imparipinnate (with 3-5-7 ovate-lanceolate leaves) packed with petiole and thorny-tomentose rachis; they are variable in size and shape and have serrated edge; they are also sprinkled with very simple or starred hairs very short and have the upper page of light green color and the underlying one white tomentose. The deciduous leaves. The flowers are hermaphroditic and collected in number 2-5 in short, racemose and leafy terminal tops carried by short peduncles; these have a chalice composed of 5 persistent, triangular, reflections, whitish gray sepals. The Petals are spatulated, equal in number to the sepals, caduchi, white, shorter than the sepals. They possess numerous stamens shorter than the petals and with hairless anthers. The pistil is shorter than the stamens and is made up of numerous tomentose white carpels. The fruit of the raspberry is globose and is composed (drupecetum); this maturity is detached from the receptacle and is formed by numerous small drupes (drupeola), first green and then red.

Cultivation –
Rubus idaeus is an easily cultivable shrub in temperate regions where it has a tendency to spread rapidly. Among the raspberries there are bifere varieties, which produce fruits twice a year and are uniform, which produce only once a year. The raspberry has the characteristic of producing each have many suckers from the roots, but each one lives two years. From the suckers you will have the fruits in the second year in July-August, after which they dry and must be cut. In the case of raspberries biferous, these produce berries already in the first year in the period of September-October. There are raspberries both red and yellow. For the specific cultivation technique you can consult the present sheet.

Uses and Traditions –
Dioscorides (1st century) called the raspberry “bramble of Mount Ida”, and was spontaneously known on the Asian and European continent. In Greece and Italy raspberry cultivation began around the 16th century. The raspberry is an excellent mellifera plant and bottled by bees; it is in fact cultivated and used also to obtain honey, but to produce the monofloral one it is necessary that there are quite extensive cultivations. Raspberry berries are used in the preparation of jams, syrups and jellies. However, it should be stressed that most of the raspberry cultivars grown for commercial purposes are not made up of pure strains from Rubus idaeus, but from hybridizations between Rubus idaeus and Rubus strigosus.
Raspberry contains many active ingredients including: tannins, vitamin C, flavone and organic acids. The raspberry can be used as a diuretic and a cholagogue and the infusion of leaves is useful against diarrhea. In the last months of pregnancy, the leaves and buds are used to tone the muscles of the uterus and improve contractions. Moreover, in the galenic pharmacopoeia (II century) raspberries were used for their astringent, purifying, refreshing, tonic and sudoriferous qualities. For this purpose they used both the flowers and the leaves, picked in August and dried in the shade. The raspberry syrup was known to the medieval spezia, who considered it very important “for the bilious types, whose moods are too brusque and suffering from eternal overexcitation”.

Preparation Mode –
The raspberry is a fruit that is grown mainly in Europe and the United States for fresh consumption, as a fruit, but also to garnish many sweet preparations: ice cream, yogurt, cakes, pies, liqueurs, juices, jams and jellies. Juices and syrups for the food industry are also obtained from the raspberry.