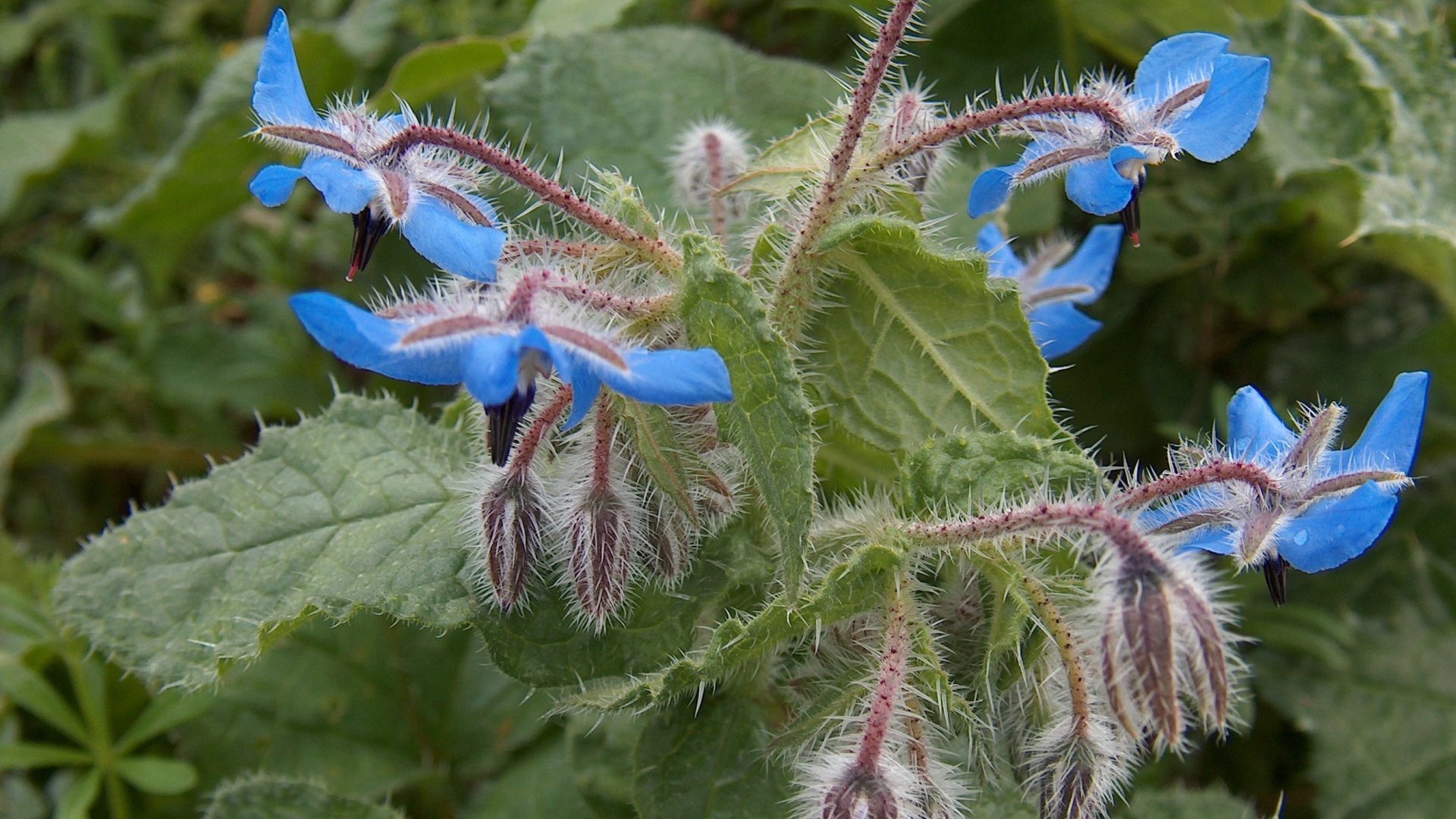 Borage or borage, borage or borago, (Borago officinalis L.) belongs to the Boraginaceae family. Borage, is among the wild plants, the most used in the kitchen, cooked kind, with a taste reminiscent of cucumber.

Etymology –The etymology of its name is uncertain. Some suppose that derives from the Arabic abou ‘father’ and rash “sweat” that is, “father of sweat” because of his sweat properties. Others assume that it comes from the Latin wad = “rough woolen fabric” because of the hairs that cover the whole plant. Others argue that it is derived from the Celtic barrach “brave man” as the warriors of the ancient people used to drink wine with borage before a battle because they believed it would give courage. In any case it is certain that the Italian name Borage comes from the Latin borago.
Geographic Distribution and Habitat –Native to southern Europe and the Mediterranean region, probably of Spain and Morocco this herb is now well set in the Mediterranean basin and spread throughout Italy where grows spontaneously up to 1,800 meters high. He loves a rich soil, loose and free of standing water. 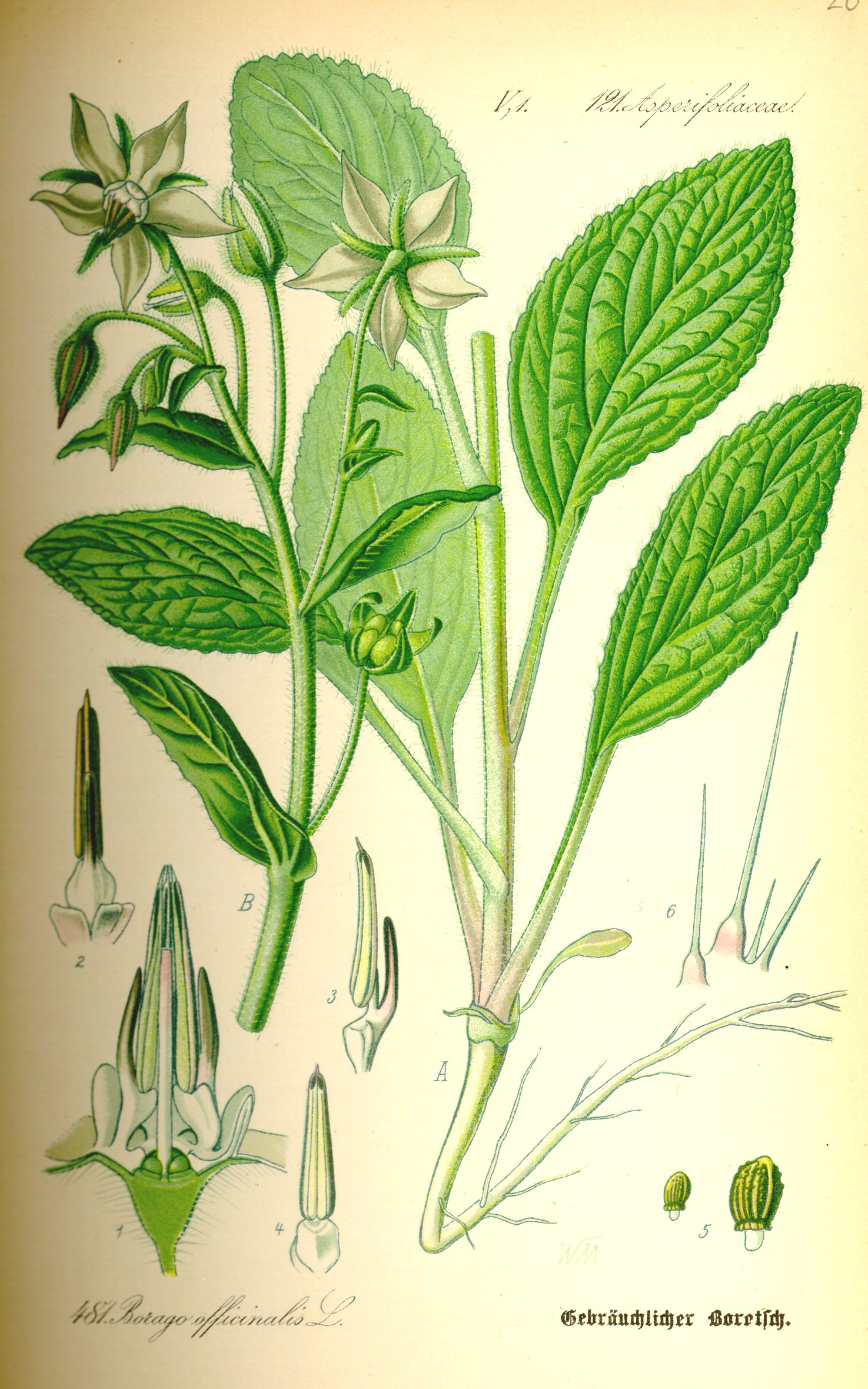 Description –
herbaceous plant, often grown as an annual, it can reach a height of 80 cm. It has elliptic oval leaves, petioles, which present a rough hair, green-dark collected in basal rosette 10-15 cm long and then smaller on the stem. The flowers have five petals arranged in a star, blue-purple, the middle one can see the anthers derived from the union of the five stamens. Flowers are the summit, gathered in groups, hanging in full bloom and short-lived. They have long pedicels. The fruits are achenes that contain within them different seeds of small size.

Customs and traditions –
The ancient Romans and the doctors of the medical school of Salerno borage considered an excellent remedy for melancholy.
The French and the British cultivated as a vegetable and it ricavavano a summer cold drink.
Borage is a plant that provides a very pleasant nectar and much sought by bees who derive a honey with a particularly pleasant aroma.
And ‘one of the fundamental components of preboggion the bunch of herbs typical of Ligurian cuisine.
The young leaves are variously used in the kitchen.
The traditional use has been cooked to the leaves, which are used in many regional dishes for soups, stuffed ravioli and pansoti in Liguria, cakes and omelettes. Typical is the consumption of pancakes flowers and leaves (passed in batter and then fried). Cooking eliminates the hairs covering the leaves. Moderate amounts of the young leaves were used raw in salads and are used episodically equally even flowers.
Borage oil is rich in omega 3 and omega 6 fatty acids These substances are useful in modulating certain inflammatory stored in our bodies. In the case of borage (and also dell’enothera) it is specific for disorders of the female cycle characterized by pain (dysmenorrhoea) and in dermatitis. In the case of dysmenorrhea, borage oil could be usefully associated with other plants such as feverfew (Tanacetum parthenium) and dermatitis in the burdock.
It emerged the commercial interest, internationally, for the oil extracted from the seeds, which has several uses: nutritional, dietary, medicinal and cosmetic. The plant is of easy industrial cultivation, which increases the value, since the only other vegetable source for this oil are the seeds of Oenothera biennis, more complex cultivation and with lower yields.
The blue flowers are used to color and decorate the dishes and to color the vinegar; frozen in cubes can be decoration for summer drinks.
Borage is a wild plant widely used in the kitchen. It uses the leaves, usually after boiling, to remove the hair.
The leaves are excellent fried with batter or use to fill ravioli and tortellini or simply chopped and made omelette.
They can also be used to flavor various dish with their tangy taste vaguely reminiscent of cucumber.
The flowers are edible and can be used as a garnish to various dishes. You can freeze in ice cubes to give a touch of color to the summer drinks. They can also be used to color the vinegar.
The borage plant contains small amounts of pyrrolizidine (the oil of the seeds has none), an alkaloid that can cause liver problems if you eat more generously although it is preferable that people with liver problems should avoid eating it.
This herb, for its emollient qualities, it is excellent for the treatment of dry and sensitive skin: the leaves can be added to bath water or boiled briefly, chopped and placed in compress on the skin.

Preparation mode –
As written before, the leaves and petals of borage contain some hepatotoxic substance; know that cooking helps to reduce (although not completely eliminate) the potentially toxic substances contained in the plant; It is, therefore, generally advised not to eat leaves, flowers and raw sprouts, but rather use them to enrich stews and soups.
Traditional recipes, often use the borage also for the preparation of pies. Sometimes used in salads or as a topping for fresh cheeses, but the use, raw, is currently very controversial.
The stems of borage are usually fried. The flowers are sometimes used for flavoring brandy and other liquors; They can also be candied and become decorations for cakes and other sweets.
The decoction and infusion of borage help fight respiratory diseases, particularly for coughs. In addition, promoting perspiration, it is great in the cases of fever. And ‘an excellent blood cleanser and as infusion that simply consumed as salad.
The rinses help in case of inflammation of the oral routes. And ‘good in situations of dry skin, eczema, psioriasi and irritations in general.
In the cosmetics infused added to bath water cleans and soothes the skin.
Centrifuged with watercress and dandelion gives an excellent purifying drink for the complexion.
Borage is a wild plant widely used in the kitchen. It uses the leaves, usually after boiling, to remove the hair. The leaves are excellent fried with batter or use to fill ravioli and tortellini or simply chopped and made omelette. They can also be used to flavor various dish with their tangy taste vaguely reminiscent of cucumber. The flowers are edible and can be used as a garnish to various dishes. You can freeze in ice cubes to give a touch of color to the summer drinks. The borage flowers can be used to color the vinegar.
The petals and leaves of borage contain, in still not known amounts, pyrrolizidine alkaloids, substances with a certain degree of toxicity; taking infusions and decoctions should therefore be limited, while it would be advisable not to eat raw leaves and flowers. Herbal teas and infusions made from borage are contraindicated during pregnancy and lactation. The borage seed oil is considered a safe product; however, it is contraindicated in patients with hemophilia or taking anticoagulants, as it tends to thin the blood.
Warning: it is important to know that not all wild plants are edible, some can be poisonous, it is the case of the autumn mandrake (Mandragora autumnalis). The mandrake is often mistaken for borage (Borago officinalis), which instead is edible. The poisoning inedible vegetables is very common, particularly in the autumn, when many fans go to the countryside to collect various types of vegetables. Therefore before attempting the collection of Borage (like other plants) to consult the texts and sector specialists.