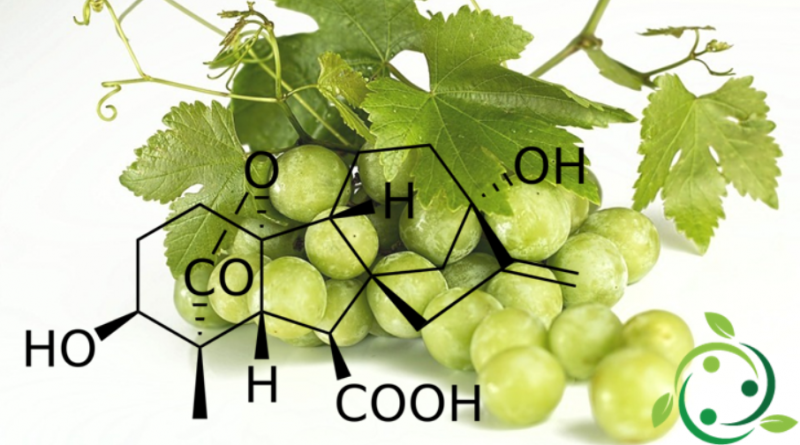 Gibberellins represent a large family of hormones of plant origin and of a diterpenic nature.
In nature they are produced by fungi and higher plants, through hormonal activity.
This large family (indicated by the abbreviation GA’s) has more than 125 molecules. The gibberellins have a structure similar to diterpenes of 19-20 carbon atoms, these atoms are grouped into 4 or 5 rings.
Gibberellins play particular roles and functions in plants. They play an important role in cell division and growth, regulate flowering, especially in rosette species replacing the effect of low temperatures, stimulate the germination of the seeds of many dicotyledons that usually need cold periods and seeds kept in the dark, they also induce elongation of the internodes and inhibit root formation.
The gibberellins are synthesized by the higher plants and are produced by the apical and subapical meristems of the stem, the young leaves, by embryos and by the seed.

In general, gibberellins, together with other hormones regulate the growth of fruits. In particular, the seeds are the source of a mechanism for regulating growth, so much so that in the varieties of Apirene grapes and therefore without grapevines they develop smaller fruit than the varieties that instead produce berries with grape seeds. Detailed botanical studies have established that the grape seeds during their development produce gibberellins, which then spread in the immature tissue of the fruit.
In general the gibberelline:
– promote seed germination. As is known, GAs are involved in the synthesis of hydrolytic enzymes during germination. In the dormant seeds, the ABA and the bioactive GAs, act within the seed in an antagonistic manner, determining the degree of dormancy. Treatments with light or cold reduce the amount of ABA in dormant seeds and increase that of GA by promoting germination;
– stimulate the growth of the stem and root. The application of exogenous GAs promotes the extension of the internode in dwarf mutants in rosette species as in the family of grasses. Gibberellins are also important for root growth. The extreme dwarf pea and Arabidopsis mutants, in which GA biosynthesis is blocked, have shorter plant roots than the wilde type. The application of exogenous bioactive GAs increases both
Recent studies have recently led to the discovery of an isolated giberella in the chloroplasts. For gibbellina, unlike auxin, there is no defined polar movement but it moves in all directions and has a limited movement with respect to the auxin.
The study of gibberellins began implicitly in 1809 with observations on bakanae, or “silly plant”, a disease of rice. The particles affected by this disease grow faster than their neighboring healthy, but this rapid growth produces high and dismal plants that die before producing the seeds (rice grains). The disease is caused by the fungus Gibberella fujikuroi.
It was by the Japanese biologist Eiichi Kurosawa in 1925 that the demonstration that G. fujikuroi produced a chemical that promoted growth, Kurosawa called that substance Gibberellina.