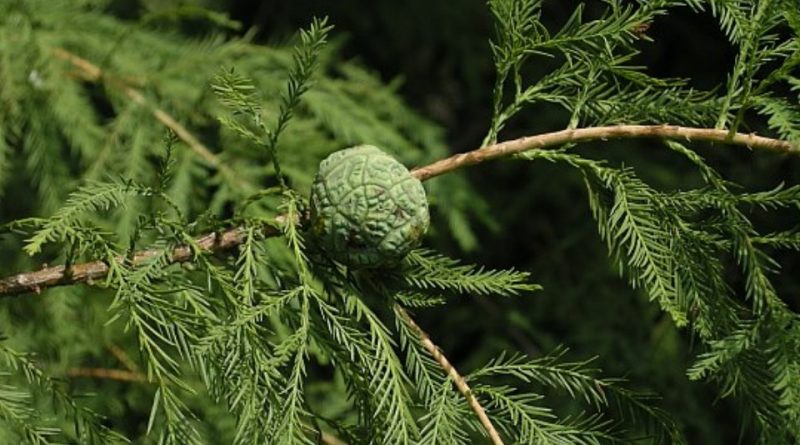 The Bald cypress, also known as swamp cypress or even taxodium (Taxodium distichum (L.) Rich., 1810) is a tree belonging to the Cupressaceae family.

Systematics –
From the systematic point of view it belongs to the Domain Eukaryota, Kingdom Plantae, Subarign Tracheobionta, Superdivisione Spermatophyta, Division Pinophyta, Classe Pinopsida, Order Pinales, Family Cupressaceae and therefore to the Genus Taxodium and to the Specie T. distichum.

Etymology –
The Taxodium terimen derives from the Taxus genus, due to its proximity to plants of that genus. The epithet specific distichum comes from the Greek δίς dίs, twice and from στίχος stíchos, order, row: that is, arranged on two rows, referring to spikelets, flowers, leaves or leaflets.

Geographic Distribution and Habitat –
Taxodium distichum is a plant native to the southeastern United States, in an area ranging from the Delaware Bay (between Delaware and New Jersey) and from southern Indiana and Illinois to Florida and eastern Texas. It is found in the lowland forests with mild oceanic climate, along river courses or in marshy areas. It was introduced in Europe in the mid-seventeenth century. 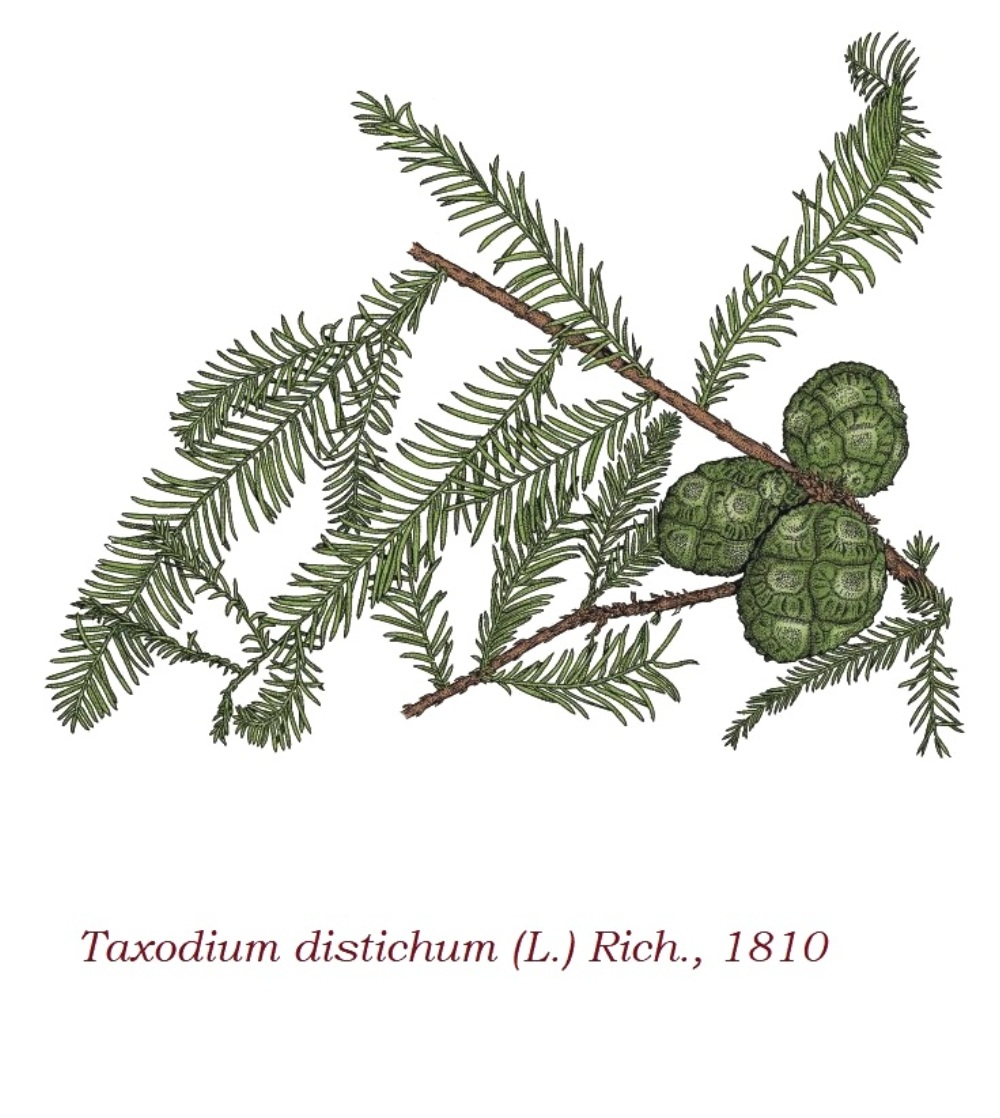 Description –
The Taxodium distichum is a very long-lived tree, which can live up to 1000 years and can reach a height of 40 meters with a pyramidal and majestic bearing in the old specimens. It has a straight trunk that has a gray-tawny or brown-greyish rind, longitudinally weakened; it is widened in the basal part and is surrounded by large conical spikes about one meter high (pneumatophores) emerging from the muddy water, allowing the roots to breathe in marshy areas. The leaves are light green needles, about 2 cm long; they are distichous, opposite in the twigs of the year, alternate in the older ones; in autumn they take on a reddish brown color, before falling. The male cones are ovoid and small and are grouped together on terminal spikes; the female ones are at the base of the male spikes, greenish and roundish. The fruits are spherical galbuli with a diameter of 1.5-3 cm), of a brownish-green color, which are completely flaked off when ripe; these consist of sterile scales and fertile scales that host two more or less triangular seeds.

Cultivation –
The Bald Cypress can be grown in humid climates but not too cold: in rigid climates it survives, but it can not reproduce because the ice damages the new seedlings. It is however a very rustic plant resistant to smog and no important diseases are known, does not require pruning and can live indifferently in soils that have the worst conditions, sandy, peaty, humid or alternately submerged and then dry for long periods. It loves the sun and is well suited to windy areas and with strong temperature ranges. For the details of the cultivation technique see the following sheet.

Uses and Traditions –
The wood of the Bald Cypress is widely used in the United States because of its soft consistency (but very resistant to fungal attacks); in other areas it is widely used as an ornamental plant, especially in poorly drained soils and along the banks of urban parks. There are two varieties most suited to gardens, almost forgotten, but today they are considered a rediscovery:
– Taxodium distichum ‘Pendens’, with a tight habit, grows less than the typical species, the trunk rises a little’ undulating and the side branches hang soft and compact with a weeping look;
– Taxodium distichum var. nutans, which has a very nice foliage; as an adult, the whole plant acquires an elegance that is hard to equal, with branches that become thin, horizontally arranged, alternating on its massive trunk; also its spring bloom is curious and showy.
Then there are some cultivars suitable for very small gardens:
– Taxodium distichum ‘Cascade Falls’, is a new cultivar with an elegant and contained habit, with hanging branches and orange foliage in autumn;
– Taxodium ‘Secrest’, this too has only been available for a few years; is a dwarf cultivar, with horizontal branches, which usually the nurseries offer grafted to sapling according to the prevailing fashion in northern Europe. Thanks to its rusticity it lends itself to being planted in planters placed even in extreme conditions.
Both these cultivars have been proposed as plants to be cultivated also in pots or planters. In this case, however, keep the soil very humid, perhaps with the use of a saucer full of water.

Preparation Mode –
The Taxodium distichum has no particular uses of food or therapeutic type.