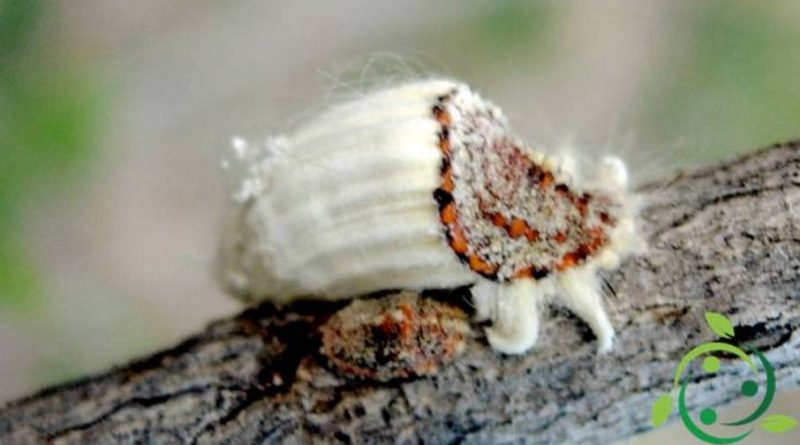 Geographic Distribution and Habitat –
The Icerya purchasi is a phytomizo (insect endowed with a pungent-sucking mouthful that feeds on the sucking lymph of plants) of Australian origin but widespread throughout the world since the nineteenth century, thus becoming cosmopolitan.

Morphology –
It is a cochineal with apparent dimensions of the showy pseudofemmina due to the presence of the waxy viscous that extends behind the real body of the insect. Pseudofemmina is an individual with neotenic characteristics; in fact the morphology is typically primitive for the modest degree of involution of the adult, with antennas composed of 11 articles, well-shaped and functional legs and presence of tracheal spiracles in the abdomen. The actual body has an oval shape, dorsally fairened, of a reddish-orange color. Thin, waxy filaments radiating out from the body radiate over the surrounding surface. When the cochineal reaches sexual maturity, a showy waxy ovisacco is produced which is white in color with 16 longitudinal dorsal and lateral furrows. The males, rather rare, are small, yellow, with only one pair of wings and with abdomen ending with two caudal processes.

Attitude and biological cycle –
Lcerya purchasi often winters as an immature or adult form, but it can also be done in every stage of development. At the end of winter the production of eggs in the evacuation that contains some hundreds begins; subsequently (beginning of spring) the neanidi appear (the generation). This generation is followed by two others, with the appearance of nymphs towards the month of June (2nd generation) and September (3rd generation). In this way L’lcerya purchasi performs 3 or, in favorable cases, 4 generations in a year. Both sexual and parthenogenetic reproduction are rare events and the reproduction by self-fertilization of hermaphrodite individuals largely prevails. For containment of these generations, appropriate containment and biological control systems can be adopted.

Ecological role –
Lcerya purchasi is typically associated with citrus fruits, but we can find it on other woody plants and, less frequently, on herbaceous plants. In Italy it can be found, as well as on citrus fruit, also on Pittosporum, on Ginestre, on Acacia and on Robinia. The damage is due to the subtraction of the lymph with production of the honeydew, on which they settle fagots, also attracting the ants. Massive infestations lead to a gradual decay of the plant until death. The Icerya purchasi is naturally controlled by Rodolia cardinalis, an Australian Coccinellid, introduced in Italy by the Institute of Agricultural Entomology of the University of Naples, for which it often represents an insect of secondary danger.