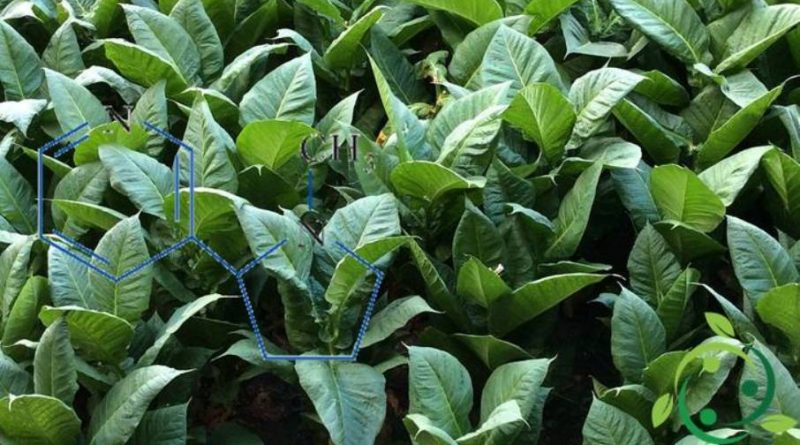 Nicotine (from the name of the tobacco Nicotiana tabacum) is an organic compound, an alkaloid, found in all parts of tobacco plants and particularly concentrated in the leaves, of which it constitutes about 0.3 – 5% of the dry weight. Nicotine is processed by biosynthesis from the roots and then accumulated in the leaves. Nicotine biosynthesis requires a coupling reaction between the two cyclic structures that make up nicotine. The pyridine ring of nicotine is derived from nicotinic acid, while the pyrrolidine ring derives from the N-methyl-Δ1-pyrrinium cation. The biosynthesis of the two component structures proceeds through two independent syntheses, the pathway for nicotinic acid and the tropane pathway for the N-methyl-Δ1-pyrrolinium cation. We find nicotine, albeit in smaller quantities, also in other solanaceous including: tomato, potato, aubergine and pepper. The nicotine, in the plants in which it is present, is biologically connected to the defense of the vegetable from the herbivorous organisms.

In the pure state, nicotine is a colorless liquid, and exposed to the air, darkens and is partly responsible for the smell of tobacco. The brute formula of nicotine is C10H14N2. It is a levitated biterzia base, while its salts are right-handed.
Nicotine is miscible in water and soluble in organic solvents. It is obtained by extraction from the leaves of tobacco cut into pieces and, after appropriate alkalization, distilled in a stream of steam. The resulting distillate is then precipitated with oxalic acid, filtered and re -calyzed and then extracted with ethyl ether. Afterwards, after the removal of the solvent and rectification at reduced pressure, a yellow colored liquid is obtained, which is nicotine, but which soon becomes darker.
Nicotine, taken in small doses, should stimulate the release of dopamine, in addition to other neurotransmitters such as serotonin, vasopressin and adrenaline. All this generates a sense of euphoria in the consumer. Recall that the lethal dose (LD50) is 0.5 – 1 mg / kg for humans and 50 mg / kg for the rat. Nicotine is therefore an amazing substance. The habitual nicotine consumers in fact develop a strong psychic dependence on the substance, very similar to the addiction generated by heroin and cocaine, to which is added a more or less strong physical dependence.