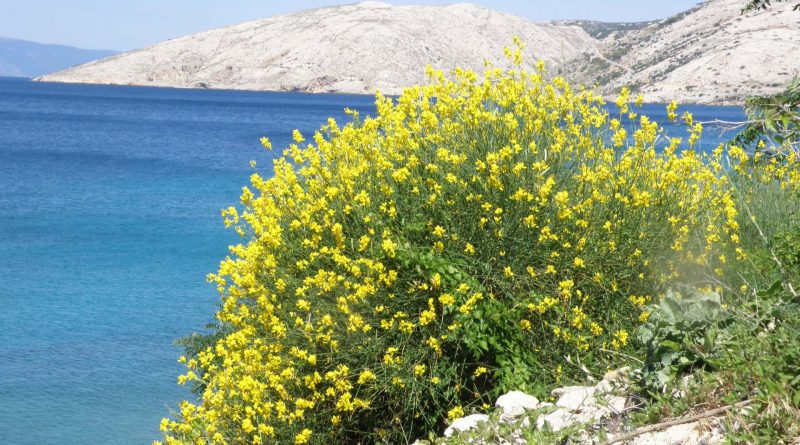 Spartium junceum L. is a plant belonging to the Fabaceae family. It is typical of the gariga and Mediterranean scrubs. It is also known as the Spanish broom and is the only species of the Spartium genus.

Etymology –
The name of the genus, according to some authors, would derive from the Greek words spartion = lanyard, or by speyro = lego, for the frequent use that was mainly done in the countryside, its branches, such as strings and ligaments. The specific name derives from the Latin juncus = juncus and the Latin adjective of junceus = giunchiforme, which remembers the verb juncere = join for the resemblance to the rush, which for its flexible stem like that of the broom, it is just to bind.

Geographic Distribution and Habitat –
The fragrant broom is a native species of the Mediterranean area, from southern Europe, to North Africa to the Middle East. It is, however, endemic to much of the Mediterranean basin. This species grows in sunny areas from 0 to 1200 m s.l.m ..
It prefers arid, sandy soils and can also grow on clay soils, provided they are not subject to moisture and water stagnation. 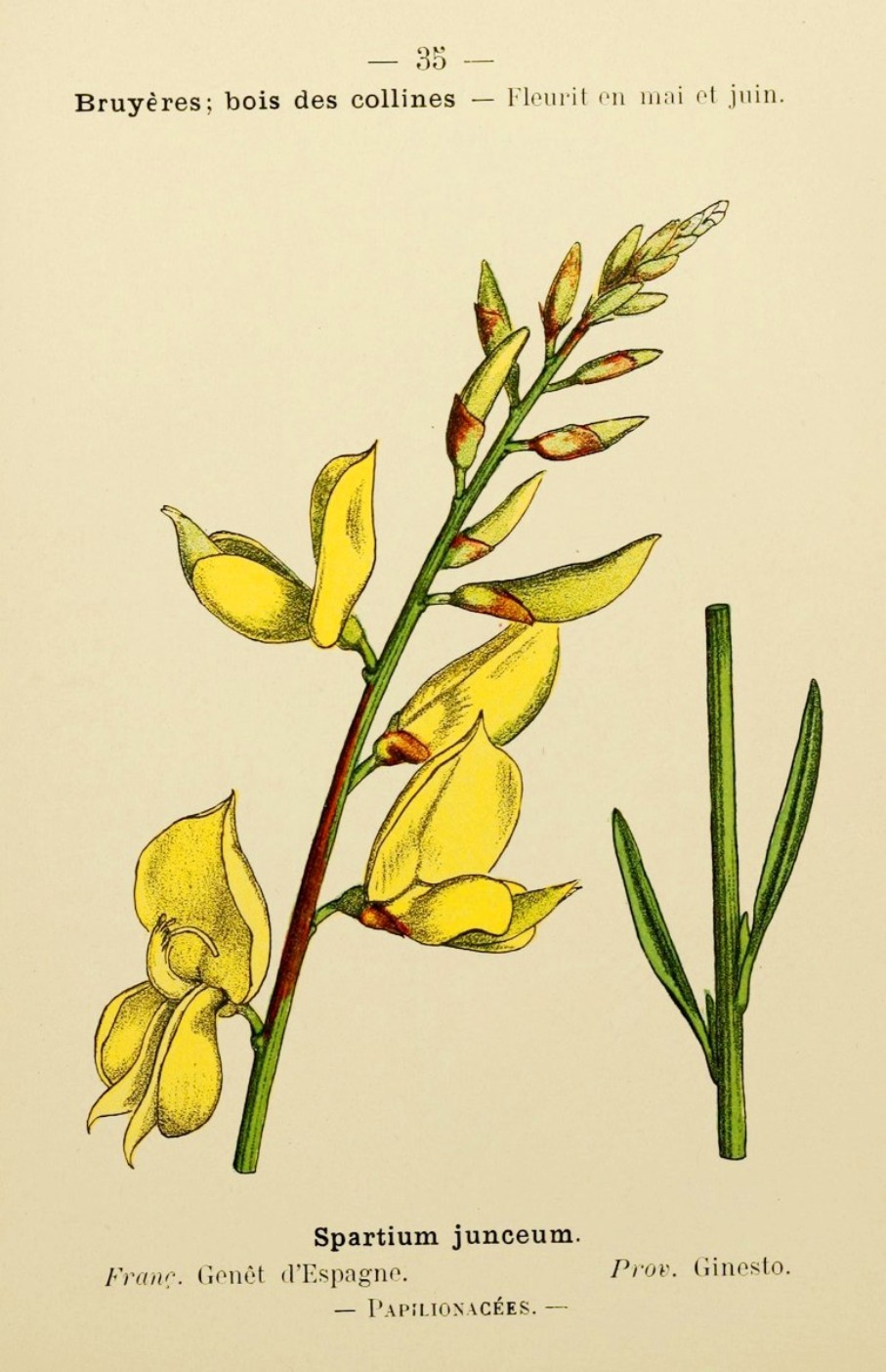 Description –
From a morphological point of view it is a plant that has a shrubbery (high from 0.5 to 3.00 m), perennial, with long stems. The barrels are green cylindrical compressible but resistant, erect, very loud and are called vermin. The leaves are of lanceolate type, the flowers are brought into live yellow racemas. Pollination is typically entomogama (by insects). The fruits are legumes which, when ripened, are blackish). Legumes contain 8-12 seeds, small and black. As far as the seeds are concerned, they are dropped by gravity at a short distance from the mother plant.

Cultivation –
For the cultivation of the broom, the most commonly used method is seed propagation. Sowing is done in autumn (September) or even in spring (March to mid-April). To favor a high percentage of seeds germination (about 90%) in a relatively short time, we recommend one of the following treatments:
• Physical temperature cycles: hot water at 100 ° C for 23 minutes, water at 60-65 ° C for 30 minutes in water at 40 ° C for 1 hour, cold water for 40 hours.
• Chemical treatments: dive for 24 hours in a 2% solution of NaHCO3 (baking soda), 15-30 minutes in concentrated H2SO4 (sulfuric acid) with subsequent abundant wash.
As for the government of this plant, it is emphasized that rejuvenating cuts are an obstacle to flowering and fruiting. Therefore, if you want to obtain flowers and seeds, leave an unused number of plants for a few years (5-6).

Preparation Method –
The broom does not have many applications in the kitchen but it is worth recalling here two recipes: the salmon recipe with broom flowers and the couscous salad with broom flowers.
For the recipe of salmon with broomsticks, proceed as follows:
say the hops of hops preserving only the tenderest part, then boiling them in salty boiling water for 2-3 ‘; drain them and let them cool. In a saucepan, pick up a spoonful of beaten pepper grains, a peel of garlic peeled and cut in half, hop buds, g 60 of oil, and the cured watercress; cook on average flame for 5-8 minutes and eventually remove the garlic.
Wipe the salmon fillet and cut it into 8 taps (about 8x6x4) by 100 gg., Then place them in a non-stick casserole on the skin, cover them with a handful of broom flowers and sprinkle with flaky salt.
Bring them on fire with the flame to the minimum and gently rub it; after 15-18 ‘lids and continue cooking for another 5-6’ without turning the salmon; Finally turn it off. In each dish put two salmon fillets with a few salt flakes, pour the watercress and hops, sprinkle with gravy and decorate with broomsticks.
For the couscous salad with broomsticks, proceed as follows:
In a bowl pour the couscous and season the grains with 1-2 tablespoons of oil.
Heat about a glass of water, which you will pour warm on the couscous. Cover the bowl with a plate and rest the couscous for a few minutes until it swells. With the help of a fork, mow and separate the grains: let it cool down.
Eat the eggs. In the meantime, clean and wash the salads, tomatoes, celery and pepper. Cut the striped salad leaves, divide the tomatoes into four cloves and slices them in a triangle, grind the chopped celery and the dill bell pepper.
Cut the cheese and divide the hard boiled eggs. Prepare the anchovy sauce, melting the fillets in a few tablespoons of oil. Season the couscous with anchovy sauce and separate the vegetables with a pinch of salt and oil.
Combine the couscous and the cheese with the salad and mix, finally decorated with eggs, black olives and a handful of broom blossoms.