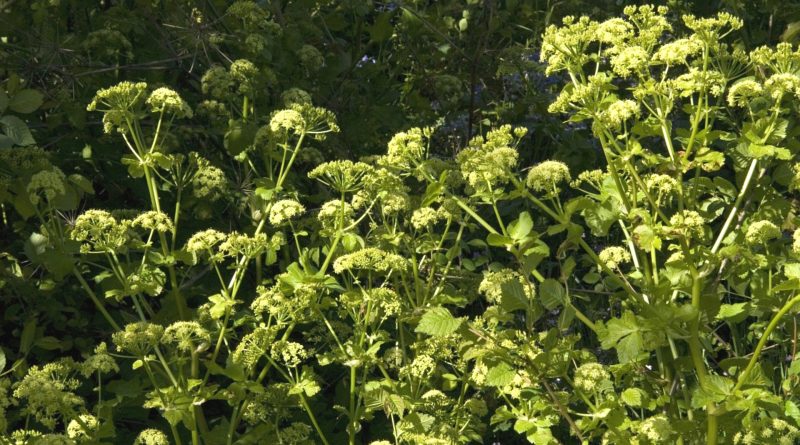 Common or maceronous corinol (Smyrnium olusatrum L., 1753) is a herbaceous plant, native to the Mediterranean, belonging to the family of Apiaceae.

Etymology –
The name of this genus comes from the Greek “σμυρνα” which means myrrh and this in reference to the aroma of seeds; As for the specific epithet, this is derived from the Latin “olus” atrum = black grass, referring to the color of the mature fruit.
The popular name Macerone probably stems from rubble, where it often finds and vegetates.
It is also called, in jargon, alessandrine, common corinthians, laziness or maceron, odd. In Lecce (where it is often consumed) it is called lácciu riéstu (lácciu stands for “acc” or “celery”), or sigh, nzirnia, zavírna, zirna, zírnia, zirro to Martina Franca. Flowering umbrellas are called, always in Lecce, spirits.

Geographic Distribution and Habitat –
Common or maceronous corinol is a native species of the Mediterranean basin; We find it in North Africa (Morocco, Algeria and Tunisia), Southern Europe (Greece, Italy, ex-Yugoslavia, France, Portugal, Spain), Western Asia (Turkey, Cyprus, Israel, Lebanon, Syria). In the remote era, this species was introduced in Northern Europe (Great Britain, Ireland, the Netherlands) where it was naturalized.
It can be found mainly in humid and shady places, spotless and unspoiled places, from the sea level up to an altitude of 800 m. 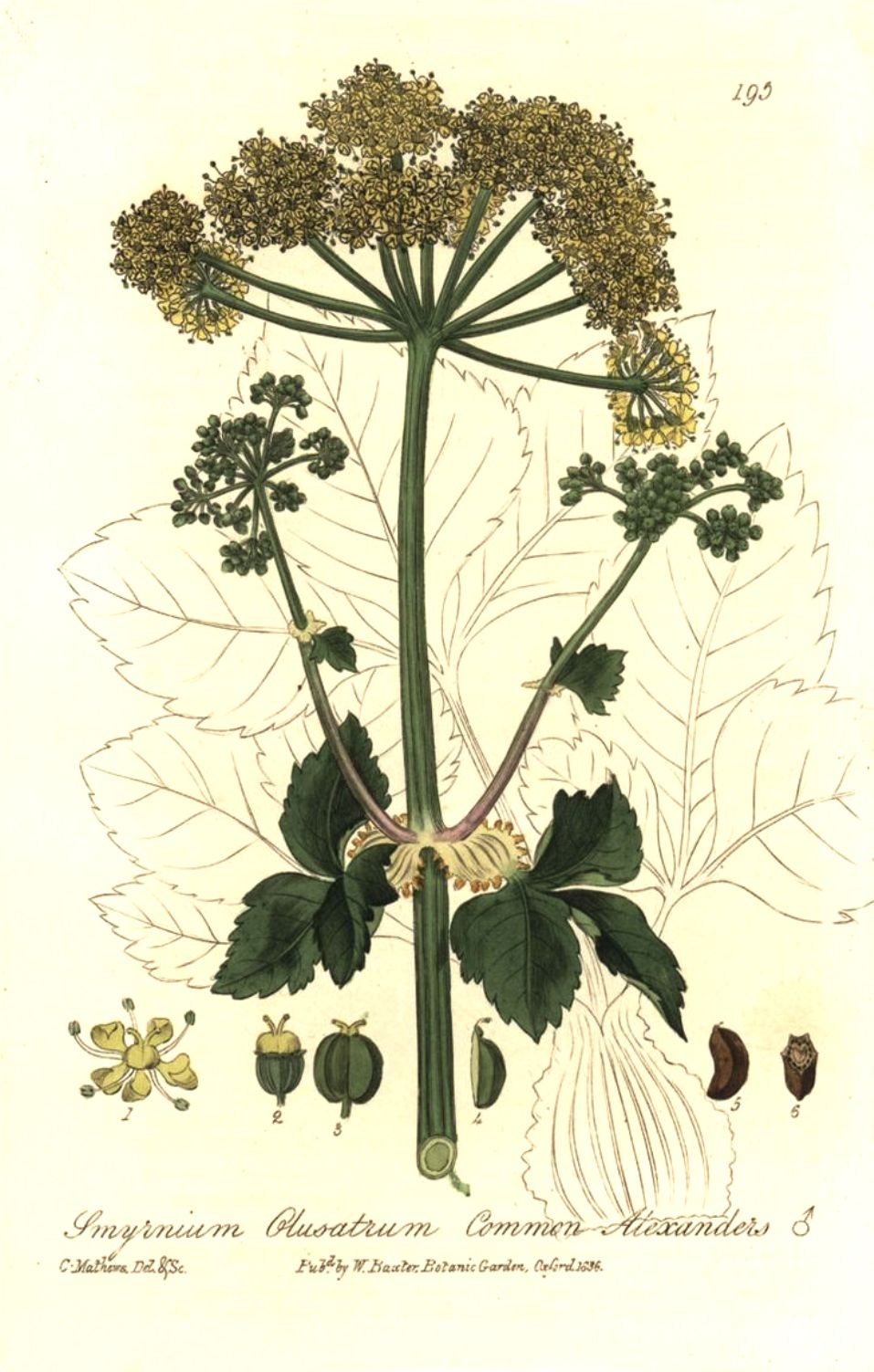 Description –
Smyrnium olusatrum is a biennial herbaceous plant, with erect blades, cylindrical, with longitudinal red streaks, which can reach 40-80 cm, but which in special conditions can exceed 150 cm. Its root is robust and branched.
This species has opposite shades of glossy green; These are composite, with large and dentulous leaves. The basal leaves, which are larger, have three separate oval segments, 3-4 cm wide and about 10 cm long; The upper leaves, smaller than the first ones, consist of three leaflets. The petioles, with reddish veins, are enlarged to their base, inguing the stem.
Smyrnium olusatrum is characterized by umbrella inflorescences composed of 6-12 (sometimes even more) small umbrellas, with long peduncles with many spokes. The flowers of this species are small, with pentametric symmetry with yellow-greenish petals; These have a two-carat egg ovary at the center. Sepals are virtually absent or very small and the cup is nearly completely welded to the ovary. The ovary carries two styles that extend to the base in a necroweight disc. The flowers of this plant are hermaphrodites (they present both male and female organs) and are frequented and pollinated by insects. The flowering of the plant occurs in a period that swings between February and May.
The fruits are 4-5 mm long globular skizokars, first green then black; Maturity split into two parts, each containing a small black seed, crescent shaped.
Of the same genus in Italy there is also the Smyrnium perfoliatum L. subsp. Perfoliatum, with crowned-toothed upper leaves, tightly wedged upper shaft and tuberous short root, inferior leaves without ear, tops with a toothed-foam lamina.

Cultivation –
The cultivation of this species, today virtually abandoned, is lost in the night of the times. It was described by Pliny and Columella in the first century BC. It was then called “parsley alessandrino” and used instead of celery for its aromatic flavor. Anciently grown as a vegetable, it is still, in some countries of the Lecce, used in the kitchen instead of celery.
Because civilization has then succeeded in achieving greater success than the Apum graveolens rather than the Smyrnium olusatrum (common corinol), relegating it to “hell weed”, I believe it is because of some market law. To put it another way, the Apium proved to be more tangible and perhaps even a bit more appealing and more used because of the more substantial coasts.
However, its reintroduction would make it possible to increase the biodiversity of farms as well as a more varied dietary diet.
For its cultivation, the same rules apply to celery, although this is sometimes a more delicate species. In some cases, however, it appears, as seen, as a weedy species.
However, it does not tolerate much sun exposure and prefers to be kept in sufficient humidity.
It likes soils richer than organic matter and can be affiliated in the same way as celery.

Uses and Traditions –
This plant for its aromatic flavor, as it was said, was originally grown for food use and was also known as “parsley alessandrino” (Petroselinum alexandrinum). Around the 16th and 17th centuries it was gradually replaced by celery, domesticated in Italy as a vegetable. In some eastern countries, it is still cultivated for food purposes by using young steamed stems, boiled or candied roots and fried flowers.
This plant speaks of Galen as a food ingredient in its use in its time (II sec DC) known and appreciated for bitter taste and stimulating and digestive properties and was described, as said, by Pliny and Columella in the first century after Christ.
In popular medicine root juice was considered diuretic and stimulating appetite, juice of the whole plant was used to disinfect infected wounds and sores.
The shoots of this plant can be eaten raw in salad while the leaves can be used to flavor soups. The fruits and the floral buttons can be used, raw or macerated in vinegar, to flavor meat dishes, soups and salads. Even roots, raw or cooked, are edible. From this plant (roots, stems, leaves) it is possible to extract a rich essential oil in terpenoids.
Smyrnium olusatrum has cholestatic and digestive properties.
This plant that now grows only in the wild state. The aromatic and intense aroma of its leaves and stems reminds that of celery.
The Romans accompanied the dishes with salads of young leaves and jellies both raw and raw; They appreciated bitter taste and stimulating and digestive properties.
At one time, ripe seeds, despite the resinous taste, were ground to flavor some dishes, especially the meat: they replaced the pepper, spice from the high cost for the poor economic availability of rural populations.
The seeds have antispasmodic properties, while plant juice can be used as a wound disinfectant.
Roots are used like carrots; Shoot buds and umbrellas like asparagus; Leaves, boiled or in soups, such as red radish.
With roots and leaves you can prepare aromatic sauces for soups and broths.
The leaves are flavored with fish and crustaceans.
The ripe, black ripe seeds are chopped like pepper on tartas and fish dishes.
Since Gayelord Hauser has found that smirk is the richest vitamin A food, he has come back to be sought after and used in the kitchen.
The same uses have Smyrnium perfoliatum L., toothed corinols, which are rather rare today.

Preparation Method –
With common or macular or quirky corinols you can make different uses in the kitchen.
The shoots of this plant can be used raw in salad, leaves to aromatize soups; Roots can be used raw or cooked. Fruits and floral bottles, macerated in vinegar, can garnish meat, soups and salads.
Here are some recipes prepared today in some parts of Italy.
Smirnio and Parmesan cheese –
The ingredients are the root of the plant, oil, salt and Parmesan.
The procedure is as follows: finely slicing the root, seasoning it with oil and salt, garnish with flaky parmesan.
Sciusciel (broth with eggs) to the smirnio –
The ingredients are a freshly prepared broth, 4 eggs, 50 grams of Parmesan cheese, 30 grams of pecorino cheese, parsley and lemon juice.
The process is as follows: prepare broth, slice eggs with parsley and grated cheese, pour into boiling broth and serve with bread croutons.
Sprouts of roasted smyrn –
The ingredients are the smell, oil and salt.
The procedure is as follows: collect the shoots before opening the leaves, roast them on the grate and season with oil and salt.